The November Masterworks concert pair this Thursday and Friday at the Tennessee Theatre boasts three essential masterpieces.  Beethoven's Violin Concerto will be in the unusual lead-off spot, with two tone poems following intermission; Richard Strauss's Death and Transfiguration, and Tchaikovsky's Romeo and Juliet.  Any of these works could either open or close a concert, and their content is gripping.

Beethoven's concerto for violin is a towering work in its genre, although it had a rocky start. Beethoven finished writing the solo violin part the day of the premiere, so that the soloist and dedicatee, Franz Clement, had to sightread parts of it at the performance!   Needless to say, these less-than-ideal conditions led to an unsuccessful debut, and the work lay in relative obscurity until 1844. At that time, 12-year-old Joseph Joachim resuscitated the work in London under the baton of Felix Mendelssohn.  Joachim would later become a close friend of Brahms, collaborating on the later master's violin concerto and contributing the work's cadenza.   Luckily, guest soloist Paul Huang will have had much more time to prepare than Franz Clement did back in the day.

Death and Transfiguration is a deceptively macabre title for a work that is chock-full of both energy and profound beauty.  Strauss's command of orchestration is just jaw-dropping, and guest maestro Joshua Gersen has his finger on the pulse of the composer's intentions.  The phrase “tone poem” has come to be a catch-all term for a programmatic work that is longer than an overture but usually shorter than a symphony.  It isn't that the music is particularly rhyme-y; it might as easily be called a “tone saga,” or “tone mural.”  Tchaikovsky's Overture-Fantasy “Romeo and Juliet” touches on all the moods and nerves of Shakespeare's drama, thanks to some of his most poignant coloristic writing. Check out the muted violas and second violins about 5 minutes in.  It is the most beautiful musical depiction of bullfrogs in the moonlight, serenading the two lovers. 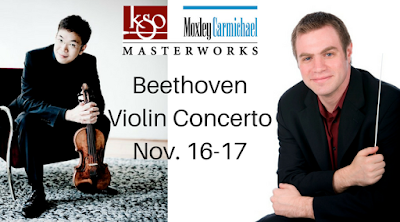