Class in the Brass


May concerts, more than those in any other month, can have an especially emotional tinge to them, as it is  the last time we see some of our colleagues for a while. If someone retires, it might be that we don’t see them ever again, in the orchestra at least. It is with that emotional tinge that we say goodbye to principal trumpet Cathy Leach. Her grace, class, and chops set the pace for the KSO’s brass family for more than 30 years. She will remain a faculty member at UT, and continue to perform with the Stiletto Brass Quintet.

One of my favorite memories of Cathy is of my first year here, 1986. I found out quickly that she was from Vermont, one of the states in the Red Sox Nation, from which I hail. That was the year, you may recall, when the Red Sox snatched defeat from the jaws of victory at the hands of the NY Mets. During the World Series we were rehearsing Verdi’s Rigoletto, with then-maestro Robert Lyall on the podium. During breaks, I made a beeline to the trumpet section, where Cathy was watching the games on the world’s smallest portable TV, about a 4" diagonal measure screen. This was way before the advent of Smartphones. I was just so tickled that here in Dixieland, there would be anyone who cared about the Red Sox enough to bring a Watchman to work.

After the Friday night Rite of Spring concert, there was a small reception backstage for Cathy. Here are a couple snapshots. 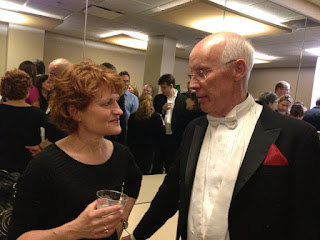 Here is Cathy and violinist Norris Dryer, no doubt giving her some sage advice. 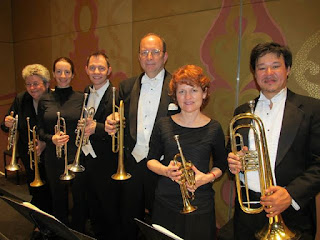 Posted by KSO blogger Andy at 9:19 PM No comments:


While the focus of our concerts this week have been Stravinsky’s Rite of Spring, I am really enjoying getting to know Lucas Richman’s Three Pieces for Cello and Orchestra. For a body of work (concerti for cello generally) that seems to be becoming weirder and weirder, Lucas’ piece is a breath of fresh air. The musical language is somewhere between Tchaikovsky and Ernest Bloch, and there is a lot of soulful cello singing. The work closes with a vigorous klezmer-like passage, wherein clarinetist Gary Sperl bends notes like a drunken glassblower. Another KSO member has also suggested that one of the themes of the Freilach is derived from the chase scene at the end of Some Like It Hot.

Meanwhile, back in the Rite, I am really loving performing this monumental work, with its thickly colorful orchestration, mind-boggling meter changes and sheer power. At first a seemingly random barrage of orchestral sound, it is a barrage that performers, conductors and aficionados have come to own. These passages are the bedrock of polytonal, polyrhythmic and atonal composition that to this day inspires composers across the board. Whether it be new orchestra repertoire (Lucas Richman’s Three Pieces, performed tonight!) movie scores (Starwars), TV music (Star Trek), the inspiration is unmistakably audible. Every time you hear or perform it, you hear something new.

Here is something to look out for. The theme that starts the Rondes Printanières, (in part 1) in the E-flat clarinet and bass flute (I think) is widely known as the “Nyaah-nyaah-ni-nyaah-nyaah” motif, which is said to be a musical phrase that instinctively “hard-wired” into the human brain from birth. No, Stravinsky is not the originator of this motif, of course, but it is heard in so many genres of music. Here are some more well-known appearances of it:

We Are the Champions by Queen
Beethoven 6th Symphony, finale.
Everyday People by Sly and the Family Stone
There’s a bit in the Star Wars soundtrack that uses the motif

These are just a few I could think of off the top of my head.

Posted by KSO blogger Andy at 1:47 PM No comments:

Ending the Season the Rite Way


Bartok’s Concerto for Orchestra, any Mahler symphony, Orff’s Carmina Burana, and Stravinsky’s Rite of Spring represent works that push the boundaries of the orchestra experience to new highs. Knoxville is fortunate to be on the verge of experiencing the Rite of Spring this Thursday and Friday at 7:30 at the Tennessee Theatre.

I love that we are performing the Rite almost a century to the day after that infamous evening in 1913, when Stravinsky turned staid Paris on its ear with a full ballet production choreographed by Nijinski. It is said that in one of the quieter moments, the audience was so vocal in their disapproval that the dancers could not hear the music. The police arrived and things calmed down a little, but the “damage” had been done. Just as Beethoven deep-sixed rigid compositional structures and templates a century earlier, (right around his opus 95), Stravinsky redefined the concept of tonal beauty by abandoning standard functional harmony and making rhythm an end in itself rather than just a means to an end. The audience reaction was not solely a result of the music, but the very “outside-the-box” choreography surely had a hand in it.

The Rite of Spring orchestra is huge; quintuples of woodwinds, 8 horns, 6 percussionists, 2 tubas, etc. etc. Wagner's Tannhauser Overture orchestra is not normally so large, but the most recent KSO performance of the work (May, 1993) involved 20-something trombones, a truly spine-tingling sound. When the Tennessee Theatre was being rebuilt in 2004, workers near the zenith of the house ceiling could still hear strains of the final E-Major chord. This week we will performing the work with a normal complement of trombones, which is, sadly, only 3. But it should be known that this is a work that trombonists live to play, so there will be a lot of inspiration.

Posted by KSO blogger Andy at 1:16 PM No comments:

Ode to a May Evening


People gathering on the Square;
the KSO is playing there!
Something’s cookin’ good, let’s eat!
Friends are here, meet and greet!

Live music to complete your day,
bring a lawn chair, that’s ok.
No, it’s not Sundown in the City,
ours is a more symphonious ditty.

Patriotic, operatic,
your pleasure will be automatic.
William Grant Still’s Can’t You Line ‘Em;
the concert goes on rain or shine-em.

Baritone sings “Figaro!”
outdoors with the KSO.
Stephen Foster, John Philip Sousa,
and something for your dancing shoes-a.

(I know, odes are probably way longer than this, but ode is such a cool word).
(7:30 TONIGHT, Market Square)

Posted by KSO blogger Andy at 2:35 AM No comments:


The KSO travels to Maryville tonight, bringing music of Rossini, Gershwin, William Grant Still, Leroy Anderson, and Sousa for FREE at 7:30 to the Theatre in the Park, across from the Blount County Courthouse. Joining us will be baritone Daniel Webb singing Rossini’s Largo al factotum for a reminiscence of the Rossini Festival (only hopefully, without the rain)!

Mr. Webb’s talents will also be showcased on Sunday afternoon in the Chamber Classics finale, at 2:30 at Knoxville's Bijou Theatre. He will be joined by mezzo-soprano Lettie Andrade de la Torre for a wonderful theatre piece, Leonard Bernstein’s Arias and Barcarolles. Bernstein’s final opus, it draws from a lifetime of erudite sources to bring some of his– and his mother’s– poetry to light. Originally scored for mezzo, baritone and piano four-hands, our version will delegate the piano part to strings and percussion (mostly mallet), in an orchestration published in 1989 by a composition student of Bernstein’s, Bright Sheng.

Both tonight's and Sunday's concerts will feature Gershwin's Lullaby for strings, a favorite of quartet players. The work is opus posthumous which means, not that he wrote it after he died, but that it was discovered or recovered or reissued after his death. It is a beautiful piece of string writing, but as a lullaby, I'm afraid it would fail, as most babies would wake up with its rousing recapitulation that is difficult to play squelchedly. I've always thought Nocturne or Allegretto would be a more appropriate title, but who asked me?

This American Masters concert will also bring the music of Cole Porter, Sondheim and Gershwin to the stage, in a show focused on orchestral/instrumental works by composers who made their biggest impact on music for Broadway. I would have to say that it’s been a while since we’ve had such a large ensemble on the Bijou stage; the scoring for these works is very clever. A word of caution, though: one of the movements of the Bernstein will REALLY wake you up when it begins.
Posted by KSO blogger Andy at 3:26 PM No comments: