The KSO's highly successful Classical Christmas concert, inaugurated last November, returns this coming Sunday at the Bijou Theatre at 2:30. I wouldn't be surprised if the concert was sold out; as of last Friday, there were only single seats available on the main floor. Our guests will be the Pellissippi State Variations vocal ensemble, and all will be led by new music director Aram Demirjian.

Works performed include Overture to a Merry Christmas (a mash-up of Mozart's Overture to The Marriage of Figaro and Joy to the World), Bizet's Farandole, selections from The Nutcracker, and music by Gustav Holst, as well as selections from the Messiah.

Handel's Messiah is the go-to work for showing off a chorus and an orchestra around the holidays. Okay, I admit it; we are show-offs, but we'll be tempering our show-offiness by only presenting the overture (Sinfonia) and the choruses And the Glory of the Lord and Hallelujah- (the entire work takes up 2-1/2 hours).

After taking a Messiah trivia quiz, I learned some interesting facts. Throughout his life, Handel refused to accept any money from the performances of Messiah. He refused because he felt that he did not deserve it. The oratorio's first performance was presented in Dublin on April 13, 1742. In order to increase the capacity of the concert hall, men were asked to leave their dress swords at home and women were asked to not wear farthingales (hoopskirts). Although the Dublin premier was very successful, the Messiah received a poor reception in London because of religious objections to the use of a sacred text in a theater. Our performance will be “co-ed,” but in Handel's day, the orchestra and chorus for Messiah were significantly smaller than those with which we are used to seeing it performed today. The chorus was only 20 singers and they were all male. Soprano and alto parts were sung by boys and castrati. Here are links to a couple of trivia quizzes...

Posted by KSO blogger Andy at 6:18 PM No comments:

Blues, Bluegrass and Something Blue

Blues, Bluegrass and Something Blue

Maestro Aram Demirjian returns to the podium this Thursday and Friday at 7:30 at the Tennessee Theatre for an an all-American program that draws on Appalachian themes for much of its content. Charles Ives' saucy Variations on “America” will open the program, followed by William Grant Still's African-American Symphony.  After intermission, a gem of a concerto for mandolin and orchestra, From the Blue Ridge will be played, with composer Jeff Midkiff performing the solo mandolin part.  The concert will conclude with Copland's beloved Appalachian Spring.

In 1891, Charles Ives was 17.  That a man so young could come up with such a concise and fresh debut as his Variations on “America” for organ proves that there was some seriously precocious talent at work here.  1891 is the year before Dvorak came to America, and while all of musical Europe was entrenched in mature romanticism, (Brahms had written all of his symphonies by 1885) Ives was dabbling with polytonality, or simultaneous use of unrelated keys.  The work lay fallow more than a half a century as an organ work before organist E. Power Biggs “discovered” it, and in 1962 American composer William Schuman orchestrated the work to its current form.  The theme that is the basis of the work is sometimes known as My Country 'Tis of Thee, but it is also the tune that served at one time or another in the 19th century as an anthem for Norway, Germany, Liechtenstein, Switzerland, Russia, and of course England, where it is known as God Save the Queen.

William Grant Still is known as “the dean of African-American composers,” and his music possesses a truly “Southern” palette.  The African-American Symphony, from 1930, was at one time the most widely performed symphony by any American composer.  The first movement is particularly infused with the blues, and all four short movements utilize the pentatonic scale, which conforms to the shape and sound of only the black keys on the piano and their various incarnations.  The third movement, subtitled Humor, quotes Gershwin's I Got Rhythm.  Whether Still copped this from the Gershwin song, or the tune was actually arrived at unawares by both composers, is up for debate.  Passages in this movement also hint at George M. Cohan's You're a Grand Old Flag from 1904.

Next up will be From the Blue Ridge, one of the only works in existence that showcases the mandolin, outside of works by Vivaldi and (Prairie Home Companion host) Chris Thile.  Composer Jeff Midkiff is a Roanoke, VA native who participated in bluegrass escapades with such groups as The McPeak Brothers, the Lonesome River Band and Chicago's Bluegrass Express.  Amazingly enough, though, he has also had a career as a classical clarinetist, performing as a member of the Roanoke Symphony and the Naples (FL) Philharmonic.  Such an eclectic background could only lead to a desire to compose classical music, and this work shows some mad skills.  Suffice it to say that if you enjoy Mark O'Connor's Concerto for Fiddle, you are going to adore this work. 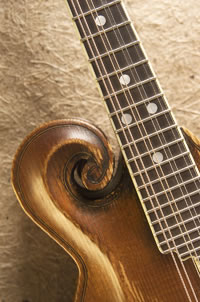 What can be said about Copland's Appalachian Spring?  It is one of the most oft-performed American orchestral works, and although the story behind the ballet is set in Pennsylvania, the subject could easily be the matrimonial proceedings of any young, rural couple in any of the states through which the Appalachian range passes, from Maine to Georgia.  Maestro Demirjian is very passionate about the work, and the passion shows as his ideas and interpretation diverge in a refreshing way from the boilerplate conception to which everyone is accustomed.
Posted by KSO blogger Andy at 1:31 AM No comments:

Q Series, Take Me Away!

"The Q" is on again this Wednesday at noon at the Square Room downtown. Live chamber music is an unforgettable experience, and after what is sure to be an unforgettable Tuesday, this Q Series offering may prove to be breakfast for you. The menu will feature, in no particular order, music from France, Cuba, Hungary, and Louisville (KY).

The string course of the musical meal will again diverge from the usual quartet formation and consist of Ernö Dohnanyi's Serenade for string trio. In this case new papa Gordon Tsai will be on violin, Katie Gawne on viola, and yours truly on cello. Ernö Dohnanyi (1877-1960) was the teacher of Sir George Solti, and the grandfather of Christoph Dohnanyi, music director of the Cleveland Orchestra from 1981-2002. He is also, imho, THE MOST underrated composer. One hurdle to his wider appeal might be the pronunciation of his name, which can be confounding without a little practice. Let's try it: dock-NON-ye. (The "ch" in "dock" is pronounced as in "loch"). His unique musical language hints at Berlioz, Faure and Brahms, but is flecked with the Romani elements of his native Hungary. This Serenade from 1902 and his Variations on a Nursery Theme for piano and orchestra are his most well-known works, but unfortunately, and unfairly, "well-known" isn't the best word. His plentiful chamber music dossier is just sitting there like a big piece of candy waitin' for a fly to land on it.

The centerpiece of the pristine 5-movement Serenade is its Scherzo, whose cockamamie, breakneck fugue subject in the violin calls to mind any number of cartoon characters falling down a hill. As if that wasn't exciting enough, the viola then layers on its version of the subject. When all three instruments are spilling their crazy melodic strands, Katie bar the door! 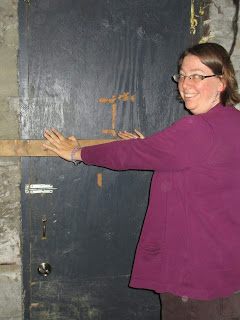 
The Principal Woodwind Quintet will then serve up a smorgasbord of engaging, diverse works, with some doubling occurring. Doubling is when a wind player plays an additional instrument in his/her primary instrument's genre, mainly flute/piccolo and oboe/English horn, as is the case in the Suite: Portraits of Josephine composed by Imani Winds founder Valerie Coleman. This work portrays the life of renowned dancer and entertainer Josephine Baker, whose between-the-wars Paris career inspired Ernest Hemingway to describe her as “the most sensational woman anyone ever saw.” Ravel's Piece en forme de Habañera will be the mellow appetizer, and Cuban jazz patriarch Paquito D'Rivera's captivating Wapango will be the tropical dessert.

That's Wednesday, November 9th at noon. Until at least then, may God bless America.
Posted by KSO blogger Andy at 3:16 AM No comments: