Dancing with the Penguin

Picardy Penguin is back! Look fast, because he’ll only be here this morning at the Tennessee Theatre at 9:30 a.m., and at the Clayton Center in Maryville Wednesday at 9:30, then he’s off for more cyber-journeys. He’ll be accompanied by the Go! Contemporary Dance Works and singer Katy Wolfe Zahn in a program that will explore dance traditions from across the globe. We’ll be playing a Dvorak Slavonic Dance, the opening of Tchaikovsky’s Swan Lake Ballet, Shall We Dance? from The King and I, a Piazzola fugue- tango, and maestro Richman’s Tango á la Picardy among others. For  a few minutes, The Hokey Pokey will be what it's all about for Picardy.

It’s interesting that the piece Picardy is dancing has a French title, for France is from whence the name “Picardy” comes. This isn’t to say that Picardy Penguin is French, just his name. I don’t think the Normandy has quite the right climate for penguins. Musically speaking, the name Picardy refers to a compositional technique called “Picardy thirds.”  That’s what happens a when a song, or “piece,” or whatever, which has been in a minor key all along ends in that key’s major mode. Something that immediately comes to mind is Coventry Carol which, in spite of its English origin, is a definitive example. In volume 1 of Bach’s Well-tempered Clavier, only one of the 24 minor-key movements does NOT end with a Picardy third.

The origin of the term seems to be somewhat vague, perhaps due to the fact that performers would add the Picardy third ad libitum, but the manuscript would end in the minor mode just to be compositionally consistent. It was probably just these two or three guys back in the 16th century, Jean-Pierre Smith and Guillaume Jones, who would just get tired of playing in the minor mode and end a section of music with a MAJOR third above the tonic instead of a MINOR third. Eventually composers took to finishing multi-movement works with an entire movement in major. Tchaikovsky’s 5th Symphony and Corelli’s Christmas Concerto are good examples of this. Mendelssohn’s Italian Symphony, which starts in A Major but whose last movement is in A minor, is an example of a “backwards Picardy third.”

The Picardy third has been described as “turning a frown into a smile” musically, and that is just what the KSO’s “cyber-penguin” will do. See you there!
Posted by KSO blogger Andy at 12:05 AM No comments:

The Sound of Spirit; the Spirit of Sound

I am moving to Music of the Spirit this week. Diverse musical, spoken, and spiritual languages are converging on the Tennssee Theatre stage this Thursday and Friday nights at 7:30. Music by Armenian-American composers Richard Yardumian and Alan Hovhaness will precede Swiss composer Ernest Bloch’s choral masterpiece Sacred Service.

Yardumian’s Veni Sancte Spiritus is based on an ancient plainsong and starts with a soulful clarinet solo. The harp also has a major solo passage, and the work as a whole has a contemplative tonal language. I am pretty sure that Nino Rota had heard this work before composing A Time for Us (Theme from Love Story) in 1969.

Alan Hovhaness was a free-thinking American Original. His music was influenced by that of many different cultures; Armenian, Indian, Indonesian, Japanese, Korean, just to name a few. He wrote some 67 symphonies, but we will be performing his 2nd, Mysterious Mountain symphony. Right at the start, the wall of string sound envelopes you and you swear you are listening to Vaughan Williams. All three composers represented on this concert wrote magnificently for the individual instrument families of the orchestra, but Hovhaness plays the families off against each other with stunning results.

Bloch’s choral writing uses the same tonal language as Mozart, Schubert, Brahms, and many others, but the sung language is Hebrew. Bloch uses the orchestra in a much more dramatic, unhingedly passionate way than Schubert or even Mendelssohn, as the confines of the Classical period had long been rendered passé. The giant wall of vocals provided by the UT Choral Ensembles is brings youthful power to a work that is just as vital as any of the great Masses and Requiems. Our baritone soloist, Nmon Ford (pronounced “En-mon,” in case you were wondering) brings a commanding presence to the role of Cantor.

In philosophy circles, there is another Bloch. Ernst (only one “e” in his first name) Bloch was considered a leader in utopian thought. You can see where there might be some confusion there, especially since Ernst’s and Ernest’s lifetimes overlapped by 74 years. A certain KSO member is related, not to the composer Bloch, but the philosopher Bloch. (Uncle Ernie)?
Posted by KSO blogger Andy at 3:25 PM No comments:

The Knoxville classical scene is bursting at the seams with events to please a variety of tastes in spite of Mother Nature's efforts. First up is Valentine’s Day, whereupon the Knoxville Opera Company will produce Donizetti’s The Elixir of Love at 8 at the Tennessee Theatre. If your date looks good in galoshes, then I’d say he or she is a keeper. A Sunday matinee will happen at 2:30, for those who will inevitably forget Valentine’s Day– again. Details here.

Speaking of romantic music, in between the two opera performances, a giant among romantic-period symphonies will be performed on Saturday at 7:30 at the James R. Cox Auditorium on the UT campus. Director of UT Orchestras (and KSO resident conductor) James Fellenbaum will lead the UT Symphony in Tchaikovsky’s Fourth Symphony, as well as a pre-concert lecture in Rm. 210 of the Alumni Memorial Building at 6:45. This powerful work is full of tunes you will never stop humming.

The Knoxville Symphony’s Youth Orchestra program is 40! When people hit 40, they tend to wax morose and use terms like “over the hill” and “out to pasture” to describe their lives, but at 40, the KSYO is bigger and more vital than ever, boasting 5 ensembles and 275 young players. There will be two separate concerts; the Preludium, Philharmonia, Sinfonia, and Youth Chamber Symphony will perform on Monday, Feb. 17th at 7:00 at the Tennessee Theatre, and the Youth Symphony will present its Concerto Competition winners on Feb. 23 at 2:30, also at the Tennessee. This year’s winners both are violinists: Ben Parton, who will be playing the finale of Shostakovich’s 1st Violin Concerto, and Daniel Choo, who will perform the first movement of Wieniawski’s 2nd Concerto. (Btw, that’s pronounced “veen-YOF-ski).”

Music of the Spirit will be the guiding light in the February KSO Masterworks concerts, (Thursday and Friday, Feb. 20 and 21, Tennessee Theatre, 7:30) with David Yardumian’s Veni Sancte Spiritus, Symphony No. 2, Mysterious Mountain by Alan Hovhaness (pronounced ho-VAH-ness), and Ernest Bloch’s Sacred Service. Veni is a short orchestral work inspired by the 13th-century plainchant. Hovhaness’ work includes in its finale a “musical tidal wave” evoking Indian raga, and Bloch’s work is the quintessential setting of the Jewish Sabbath morning service. The UT Choral Ensembles and baritone Nmon Ford will combine with the KSO for the Bloch.
Posted by KSO blogger Andy at 12:53 PM No comments:

We heard how tap shoes can cause the dancer to become another instrument in the percussion section of the orchestra in our recent Clayton Holiday concerts, and we shall hear it again tonight in the Dancing and Romancing Pops concert at 8 at the Civic Auditorium. Joan Hess and Kirby Ward will don the tap shoes for some Rogers/Astaire-influenced numbers, and Debbie Gravitte will sing some love-locked ballads, marshaling the KSO’s effort to bring an early Valentine’s gift to downtown Knoxville. Another guest performer at this concert will be Swing– that trademark taproot of early 20th-century American popular music, cultivated and nurtured by Gershwin, Cole Porter, Irving Berlin and others.

Arrangements for this concert are typically written involving keys that favor instruments keyed in flat keys. Traditional jazz instruments (clarinet and trumpet families) call B♭(two flats) the home key, but orchestral instruments are accustomed  to C Major (all of the white piano keys). Tastefully arranged tunes from this era should whiz by effortlessly without regard for difficulties of key or rhythm, yet there is very little time to put the music together in rehearsals. Those lush swing harmonies can go pretty far afield in the tonality department. Some players are sometimes unpleasantly surprised by how fast a song actually goes compared to how fast they wish it went. Complex syncopated rhythms sound very intuitive, but what those rhythms look like on the printed page surprises some folks.

The Valentine’s season continues into next week as Knoxville Opera will stage Donizetti’s L’elisir d’amour, (The Elixir of Love) at the Tennessee Theatre on Valentine’s Night and on Sunday afternoon, Feb. 16. More on that in a bit...
Posted by KSO blogger Andy at 12:36 PM No comments:

The snowy weather was just what this Yankee needed. I don’t mind cold weather as long as there is snow to show for it. Today’s three-and-a-half tips for winter driving are: bend your wiper blades back off the windshield before it starts storming, always scrape all of your windows, and leave earlier. It also helps to know (as it does in music) when to take advantage of momentum and when to avoid it.

Iffy conditions on Wednesday didn’t deter a sizable crowd from coming out for “Scotch and Strings,” a new concert experience at Boyd’s Jig and Reel in the Old City. Concertmaster Gabe Lefkowitz emceed with panache, and the principal strings brought tangos, reels, and previews of the April 6th Chamber Classics program: Haydn, Schubert and Villa-Lobos. Four different Scotch varieties (Dewars, Macallan, Arran and Laphroaig) were also in attendance, and the irresistible  pubby cheer of the Jig and Reel was augmented by this “in-Scotch” performance. (And yes, WE WAITED UNTIL AFTER). Randy and Jenny Boyd were consummate hosts. Unfortunately my music stand had had a wee bit too much Laphroig, and at one point flipped my whole book to the floor. 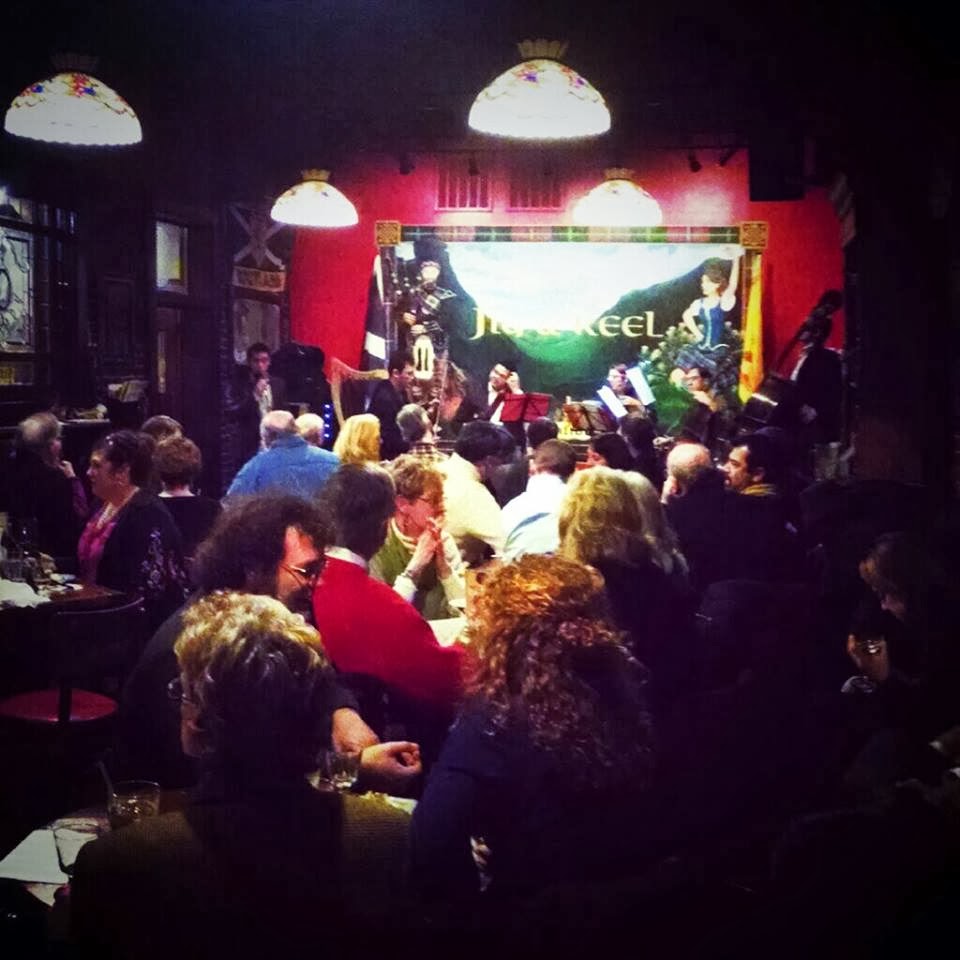 Speaking of Music and Wellness, the KSO has been selected, for the second year in a row, to receive a Getty Education and Community Investment Grant. This is an award that allows the orchestra to continue its fine work in the healthcare community, sending players into care facilities to aid in the healing process and quality of life enhancement at these facilities. The grant allows the KSO to retain on staff a music therapist, making the KSO the only orchestra in the country to do so. What’s more, players have participated in seminars which will lead to their being certified in the music therapy field. This grant is an affirmation of the healing power of music, and of the KSO’s increasing role in quality of life in the Knoxville area.
Posted by KSO blogger Andy at 1:13 PM No comments: