Riding the Wave of Christmas Spirit

What a Christmas it's been!  I feel sorry for all the “snowbirds” who made plans to go south from Knoxville to escape what is usually a pretty cold (but hardly ever snowy) place during the holidays.  I am seriously thinking of going swimming somewhere, but the rivers and lakes are probably mud-infused from all this rain-- three inches in two days!  I'm recalling a folkloric Yankee weather index called the IFTWA index-- If twa' snow, it would have been about three feet!

I still feel the “buzz” from last week's Clayton Holiday Concerts.  It was very fitting that the orchestra combine its classical forces with those of the bluegrass milieu.  The late Norris Dryer always referred to Knoxville as “the Premiere City of Appalachia,” so to wed these two very different types of music together for our holiday concert was a natural for this town.  Bluegrass master Paul Brewster and his classy act brought a demographic into the audience that wouldn't normally be into symphonic music. Kudos go to Maestro James Fellenbaum for tying the many forces together as if with a ribbon. Here's a shot of those "many forces." 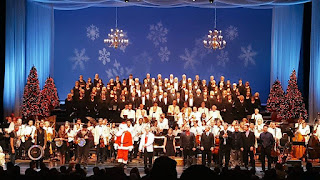 If you attended one of these concerts, you saw the final performance of our horn section as it has been for the past few years.  Second horn player Jennifer Crake Roche has decided to bow out of the orchestra to focus more on her family and her realty career.  She has been a positive force in the orchestra from the get-go, and a vital part of our horn section.  Her solid playing and level-headed attitude will be sorely missed.  There was a get-together after the final Clayton concert last Sunday at the home of third horn Mark Harrell, and here is a farewell portrait of our horn section as such. 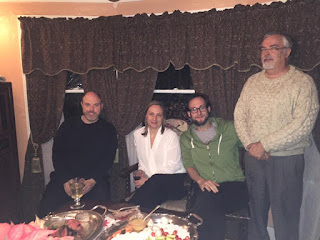 Sorry for the reticence, folks. It’s the end of a semester, it’s Christmas, and I’m a musician.  It feels like December 1st was just one long day that ended Saturday at the end of the Nutcracker at Maryville’s Clayton Center for the Arts.  I have somehow managed to not schedule anything for a full 24 hours, and I’ll take a look back at what we can now call “early December,” but first let me say that the week ahead promises four Clayton Holiday Concerts!  Friday and Saturday nights at 7:30, and Saturday and Sunday afternoons at 3, at the Civic Auditorium.  This 29th annual offering will showcase music of Appalachia with special guest Paul Brewster, the guitar-playin’ “high lonesome” tenor in Ricky Skaggs legendary Kentucky Thunder, headlining.  Also contributing will be the Knoxville Choral Society, GO! Contemporary Dance Works and the Knoxville Banjo Orchestra (and well, duhh, Santa Claus!!) under the direction of Maestro James Fellenbaum.

Our Nutcracker ballet alliance with the Appalachian Ballet Company continued its 42-year tradition with performances Friday night and Saturday afternoon at the Clayton Center at Maryville College, and last weekend at the Civic Auditorium.  It represented a turning point for the ABC, as dancer Mika Yoshida gave her farewell after a 32-year dancing career, this time as the Dew Drop Fairy in Waltz of the Flowers.  It was also announced that KSO bass trombonist Brad MacDougall (whose MacDougall Brothers Construction Co. is a supporter of the Ballet), finally took in a performance of the Nutcracker after twenty years of playing it in the orchestra pit!  It is amazing how close to the action we are in the pit, and yet how far.

There were some “runouts” in the past couple of weeks.  According to Johanna Fiedler, her father Arthur coined the term when the Boston Pops would literally “run out” to Worcester, Manchester, Portland, etc.  Our running took us to Lincoln Memorial University, Dandridge, and Athens, with Concertmaster Gabe Lefkowitz leading the orchestra and Associate Concertmaster Gordon Tsai soloing with Vivaldi’s Winter from The Four Seasons.  In Athens we performed in the afternoon for middle-schoolers on a day as warm as any day in April, then performed holiday music at the Athens City Middle School with renowned local guests Rusty Paterson, Mike Simmons and Tim Frazier, aka the Three Tenors of Athens.  There was some good R&R in the area during our down time, and the food offerings have shown steady improvement through the years of our travels there.

Speaking of food, the Q Series continues to bring in a capacity crowd at the Square Room on Market Square.  It is always gratifying when, as musicians, we compete with beautiful weather and win!  Outdoor tables all along Market square were full Tuesday.  It seems the past 8 or 9 days have been balmy, even during the Three Days of Rain.  The Principal String Quartet played a preview of our upcoming (January 10, 2:30) Chamber Classics concert of works by Schubert, Prokofiev and Brahms, and the Principal Woodwind Quintet performed a beautiful work by Paquito D’Rivera entitled  Aires Tropicales.  The next Q Series offering will be January 27.
Posted by KSO blogger Andy at 2:52 AM 2 comments: