COME FORTH ON THE FOURTH!

It's just a few days away, the biggest Independence Day celebration and concert since... last year! Saturday night at 8:00 the KSO will take the stage on the Performance Lawn (formerly the South Lawn, apparently) of World's Fair Park to commemorate the USA's 239th birthday. There will be something for everyone at this party, starting at 4:00 pm with the Regal Cinemas' Kids Zone, and music from bands Handsome and the Humbles, Bantum Rooster and Misty River. As usual, there will be an impressive array of food vendors, a flyover at the start of the concert, and of course, those fabulous fireworks will pack a charge! Here is an official link to Festival on the 4th with more details, as well as a Go Knoxville article with many other attractions

The KSO itself has some goodies up their sleeve. Anyone who tweets to @knoxsymphony, or uses the hashtag #KSOJuly4, will automatically be entered to win a pair of tickets to a KSO Masterworks performance of his/her choice. Resident Conductor James Fellenbaum will lead the orchestra in a program of festive favorites like Sousa's El Capitan and Stars and Stripes Forever, an Armed Forces Salute arranged by Bob Lowden, The Pledge of Allegiance, and John Williams' suite of music from The Patriot. Other great tunes you won't want to miss are Let It Go from Frozen, Ashokan Farewell, Selections from The Sound of Music, and a suite from Williams' landmark score to Star Wars.
Our guest will be soprano Katy Wolfe, who will sing the Pledge and Gershwin's Summertime.
Anyone who has attended the KSO's Very Young People's Concerts (where she is Picardy Penguin's charming sidekick), the Sound Company show choir (which she leads), or one of scads of productions involving her at the Clarence Brown Theatre, is acquainted with Katy's talents.

The concert will be rain or shine, and free parking will be available at several area garages- although the 11th street lot, which is closest to the venue, has had some legendary post-concert traffic snarls. Garages on Locust Street, Walnut Street, State Street & Market Square are just a few blocks walk from the show, and there will be ADA Parking at the Fort Kid Parking Lot. Hope to see you there with bells on!
Posted by KSO blogger Andy at 3:36 PM No comments:

Ok, enough lollygagging. It's time to peruse the repertoire for next season for new and challenging (to me) works. I am not including every work from every concert, just the most prickly ones, so refer to the calendar and you won't miss a thing.

I first played the Mendelssohn Overture to the Hebrides (September 27th Chamber Classics) as a freshman in high school. I found it super difficult then, but very rewarding to finally get it right. The BSO used it as background music to Tanglewood's advertisements on TV back then, showing a car (I guess) driving up the twisty, conifer-lined road leading to the Tanglewood Center. The transcendence of this piece compelled me to mention Mendelssohn in my high school Yearbook write-up. Only once since then have I performed it, in February of 1990 with the KSO. I'd say it's about time, and maestro Jim Fellenbaum thought so, too.

October has a trio of new works for me to Starting with the Concertmaster Series shows on the 14th and 15th, it's Mendelssohn again! And it's a trio. This time, the D Minor piano Trio. How I have missed this gem so long escapes me. I have actually performed the slow movement a couple times, but never the whole thing. Shostakovich's brilliant 1st Symphony, with guest conductor Marcelo Lehninger, comes the very next week, bringing with it a monster cello solo that takes some “living with.” This concert concludes with Resphigi's Pines of Rome, which is no, umm, walk in the park.

On the first of November, “October 32nd,” it's the Haffner Symphony. Every string player's audition nightmare. Mozart's most challenging symphony caps off a lush Chamber Classics concert that also features Mozart's timeless Eine Kleine Nachtmusik and Wagner's tender Sigfried Idyll. The other end of November brings guest conductor Shizuo Kuwahara, with two works that I doubt many of our current corps of players have performed; Rachmaninoff's 3rd Symphony and Rodion Shchedrin's 1963 Concerto for Orchestra No. 1 (aka “Naughty Limericks”). Run, do not walk to youTube (here, let your fingers do the running) and check this work out, it's a hum-dinger in the best sense of the word and probably some of the jazziest Russian music ever. These two works will be sandwiched around Tchaikovsky's immortal Piano Concerto No. 1, featuring pianist Stewart Goodyear.

After Christmas, chamber music will be my mantra for a couple weeks in January. While last year's Principal Quartet concert came five months earlier than it had the year before, just after Halloween, this coming season's show rides into town hot on Santa's heels. Three new-to-me (but loved-by-me) works will appear on the January 10th program: Schubert's Quartettsatz “(Quartet Movement),” Prokofieff's 2nd Quartet, and Brahm's 3rd Quartet. Three amazing works whose dry, unassuming titles sadly give no clue to the brilliance that lay within. A scant four days later, Gabe Lefkowitz and Friends (pianist Kevin Class, violist Katy Gawne and I) will collaborate on Dvorak's rollicking Piano Quartet No. 2 in E-flat. This is a late work of Dvorak that I have been waiting a long time to play. The time has come to break it out of hiding, because that cello part is a BEAR.


You know what else is a bear? Tchaikovsky's 1812 Overture. Our Independence Day Concert is fast approaching and I know that camera is gonna be on me... So I'll finish out the season in a future post. Goodnight!
Posted by KSO blogger Andy at 11:50 PM No comments:

Celebrate July 4 with a BANG! 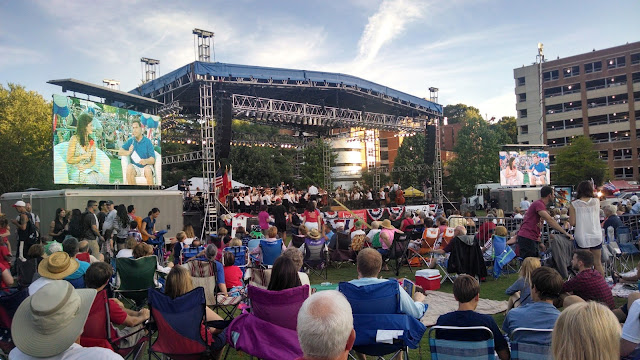 
This concert is free to attend; no tickets are required. View program here.

The Festival on the Fourth, presented by the City of Knoxville, begins at 4:00 p.m. with food vendors, entertainment, and family-friendly activities. As dusk draws near, the Knoxville Symphony members will take the stage for the KSO 31st Annual FREE Pilot Flying J Independence Day Concert at 8:00 p.m.

During the Armed Forces Salute, audience members stand when the song of their Military branch is played; a moving moment every year. 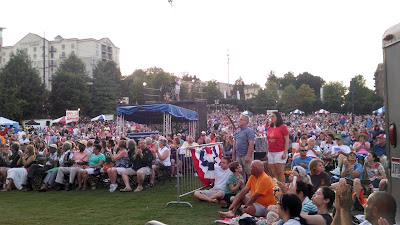 KSO Resident Conductor James Fellenbaum conducts the Orchestra
in the Star Spangled Banner, Armed Forces Salute and more recognizable tunes including "Rocky Top," "76 Trombones," and music from Disney's Frozen and classics from the Sound of Music.

Talented soprano Katy Wolfe will solo for these classics. Katy is a well-known local singer who is no stranger to sharing the stage with the KSO. She has performed in holiday concerts and has held a leading role in the Very Young People’s Concerts, a symphony orchestra performance designed for students in Kindergarten through second grades. 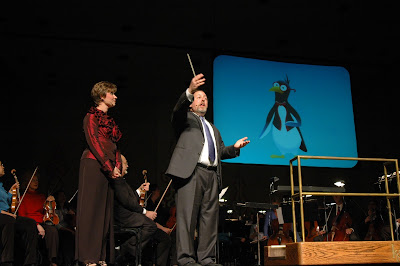 Blankets and lawn chairs are encouraged for this free, family-friendly event. Should you choose to enjoy the concert from your couch, the performance will be live broadcasted on WBIR-TV Channel 10 at 8:00 p.m. EST. Don't forget the fireworks! 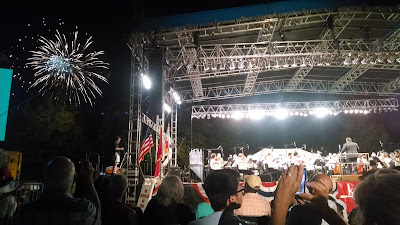 Our big, happy KSO family has taken on a couple of new members in the past few months. In two seperate celebrations, (and the events leading up to them), wedding bells have (re-)acquainted us with two fine men.

On March 29th, our Assistant Principal Second Violinist, Ruth Bacon, became Ruth Bacon Edewards. Her husband, tenor and conductor Ace Edewards, is a very recent (last month!) recipient of a DMA in Orchestral Conducting from the University of Arizona, Tucson. The wedding was in Albuquerque, NM, her home town, but a reception was held for us easterners on May 17th at Remedy Coffee. 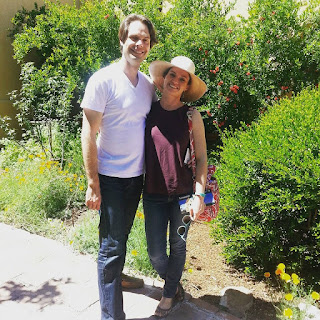 AND, just two days ago, violinist Sara Matayoshi and clarinetist Peter Cain were wed at the Lighthouse Knoxville. You may remember Peter from his stint as Principal Clarinet here when Gary Sperl spent the 2011-12 season in Tanzania. Peter now holds the 3rd / bass clarinet position with the Dayton Philharmonic, and is the clarinet professor at Lee University in Cleveland, TN. 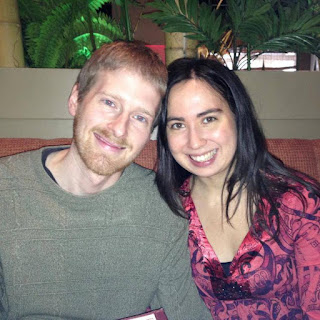 Our best to the happy couples! More proof of music's ability to bring people together.

Posted by KSO blogger Andy at 3:21 PM No comments: