Okay, my fingers have thawed out enough to type a bit here.

2018 will start with a bang! January's schedule promises to create its own body heat with SEVEN different programs. Just over the horizon lay the Chamber Classics concert, a gathering of lively friends which will take place Sunday, January 7 at 2:30 at the beautiful Powell Recital Hall on the UT campus. The Principal Woodwind Quintet will begin with Samuel Barber's hearty Summer Music, Barber's only chamber work for winds. Principal flutist Hannah Hammel will then join the Principal String Quartet for music of Arthur Foote; his Scherzo and Night Piece from 1923. Foote was a member of the “Second New England School,” a Boston-centric squad of composers which included Amy Beach and Edward MacDowell, and his music is strongly reminiscent of Puccini and Debussy.

The closing work will be Beethoven's op. 20 Septet in E-flat. A septet is a rarely found array of forces, and instrumentation is not standardized. Only Ludwig Spohr, Saint-Saens and Stravinsky have attempted that combo with any success (and I use the term “success” loosely). Beethoven's band is clarinet, horn, bassoon, bass, and string quartet. He somehow managed to find the time between composing his first SIX quartets (op. 18) and his First Symphony (op. 21) to squeeze out this gem. Its six short movements identify it as a Serenade, reminiscent of his own op. 8 string trio and of many such works by Mozart. Tickets here.

The chamber music will continue to shine on Wednesday and Thursday nights, January 10 and 11 with the Concertmaster and Friends at the KMA. These 7:00 p.m. shows will feature music by Kendall Briggs, Mozart and J.S. Bach in a program of duets, with Katy Gawne, viola and Gordon Tsai and Zofia Glashauser, violins. Tickets here or $25 general admission at the door. 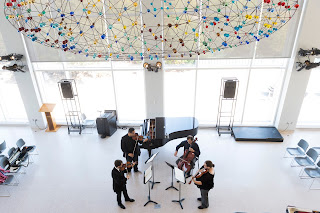 Wow, that's just the first 11 days of the year. We aim to start your year off right, and the hits just keep coming. HAPPY NEW YEAR, Y'ALL!
Posted by KSO blogger Andy at 11:50 PM No comments:

Put the KSO Under Your Tree!

It's six days before Christmas. Oops, wait, make that four. You haven't bought anything for anyone yet. If you do order something today, it's going to arrive sometime in January. Unless, of course, you order them KSO tickets! There's bound to be something coming up soon on our calendar that your giftees will appreciate. I will save you the trouble of Googling it all by listing some of them here.

January 13th at 8:00, we will be going to Indiana. Indiana Jones, that is, as we present Raiders of the Lost Ark in Concert with a live orchestral soundtrack! We will convey another of composer John Williams' masterful enhancements of on-screen action in the Civic Auditorium for just one night.

Speaking of John Williams, who can resist the spellbinding music that accompanies the Harry Potter saga… If you missed it back in October (or even if you didn't), Harry Potter and the Chamber of Secrets is coming to a theatre near you. Specifically, the Civic Auditorium on January 27th at 7:30 and 28th at 1:30. Don't throw that old broom out, it might have something left in it...

What Vol fan does not recognize the opening bars of Carl Orff's scenic cantata Carmina Burana? The Pride of the Southland Band has been playing this for years as a rave-up for fans. Come to our production of this fascinating work on March 15th or 16th at the Tennessee Theatre at 7:30 and you'll discover that there is much more to this composition than the minute-and-a-half soundbite that echoes throughout Neyland Stadium on fall Saturdays. A combination of provocative rhythms, captivating vocals, vivid libretto, and sparkling orchestration is putty in Orff's hands. Our last production of this was in April '07 and it sold out, so order early to avoid disappointment! Plus Orff and I share the same birthday…

Looking ahead to next season, the tradition of collaborating with UT's Clarence Brown Theater continues with a production of Bernstein's Candide, running from August 29th to September 16th, 2018. The October 2012 production of the Candide Suite was a was a prophetic tease for this fully-equipped offrande from CBT & KSO. Bernstein's take on Voltaire's 1759 novella is full of both artists' wit and wisdom, and what better way to celebrate Bernstein's 100th birthday?

Anyways, it's probably going to be after Christmas 'til you hear from me again, so celebrate safe and well. Happy Holidays from all of the KSO family!
Posted by KSO blogger Andy at 1:12 PM No comments:

The Christmas season has us in its embrace! You may have noticed in your travels some people moving so fast that they are just blurs, with musical instruments in tow. There is a plethora-and-a-half of additional work for musicians this time of year. Some of it is contracted as early as July! I believe the record for one day is SIX engagements, although there are still lessons to teach and families to feed. Our schedules are finally sculpted masterpieces of precision that only the most lethal weather can alter. A time allowance is always made, however, for visiting the receptions at these gigs. Let me tell you, there are some great cooks out there! Sausage balls, pfeffernüsse, Christmas bark, the list goes on and on. Savvy giggers bring empty leftover containers, and in the true spirit of the season, the locals encourage us to fill them! The amazing array of refreshments help us shun the Burger King drive-through, in addition to atoning for the occasional underprepared choir, cheesy arrangements or clueless choir director.

The KSO's focus this time of year is to bring classy, classic holiday tunes on a large scale. The annual Clayton Holiday Concerts have set a high standard in our community for quality seasonal music. This year, the 31st in the run, is no exception, with the theme of the concerts being Music from the Movies. A “heavenly host” of ensembles will join the KSO, including the Knoxville Choral Society, the Knoxville Handbell Festival Ringers, Go! Contemporary Danceworks and the Farragut High School Ensemble. A certain circumpolar resident will also bring his extensive, high-spirited retinue to the stage. These concerts will be presented at the Knoxville Civic Auditorium at 7:30 pm on December 15 and 16, and at 3:00 on December 16 and 17.  Tickets here. 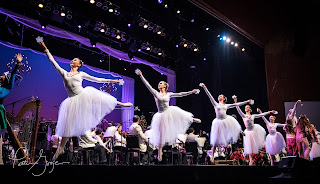 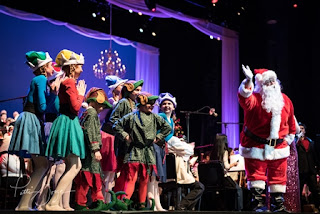 The immediate focus of the orchestra is our continuing collaboration with the Appalachian Ballet Company's production of Tchaikovsky's Nutcracker this Friday at 7:30 and Saturday at 3:00 at the Clayton Center for the Arts on the campus of Maryville College. A story that never gets old, this marks the ABC's 46th annual production of the ballet, accompanied by the KSO for the last 44 years. This is an amazing, durable partnership, the like of which is seldom seen in markets our size. Often when a recording of the Nutcracker Suite is heard, the tempi are so quick that you have to ask yourself how anyone could dance to something that fast. Still, I have noticed that the tempi in many of the faster dances have been bumped up; this can be seen as a subtle tribute to the steadily growing quality of the dance troop. 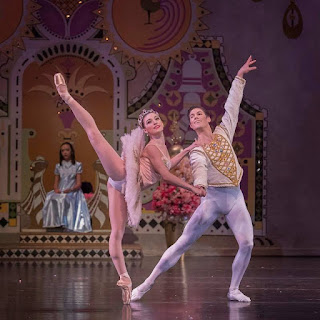 Hope to see you there!
Posted by KSO blogger Andy at 12:32 PM No comments: