The closing Masterworks concerts were the most well-attended that I can recall in recent memory. It was also the first time in a LONG time that Beethoven's 5th Symphony has had a fair audience, having had some unfortunate coincidences the past two times it was programmed. In March of 2006, the work's performance fell on the same night that the Lady Vols competed in the NCAA tournament, limiting our attendance, and the time previous to that, (not sure of the date) it snowed. It wasn't just the Beethoven that drew a crowd, though. Mason Bates' Mothership, which included soloists Christina Horn and Jorge Variego, attracted a new element of our community by blurring the genre lines between classical and electronica.

Also at those May concerts, a KSO violist was honored for her work in the area of Music and Wellness. Instead of paraphrasing a perfectly good press release, I'm including the release here…

Eunsoon Lee-Corliss, Knoxville Symphony Orchestra Assistant Principal Violist, is one of just five orchestra musicians from across the U.S. to receive the Ford Musician Award for Excellence in Community Service from the League of American Orchestras. The program, made possible by Ford Motor Company Fund, celebrates orchestra musicians and the inspirational work they do in their communities.

Lee-Corliss will be honored for her exceptional work in the Knoxville Symphony Orchestra’s (KSO) Music & Wellness program, which places professional musicians into healthcare settings to provide live therapeutic music for staff, patients, and their families to enhance the healing process. She will be presented with her award at the League of American Orchestras’ 72nd National Conference in Detroit, June 6-8, and will discuss her work at an elective session for Conference delegates.

Eunsoon and her husband Scott are enjoying an extended trip to New England before she goes to Detroit to accept her award. New England is very lucky. 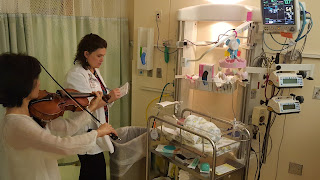 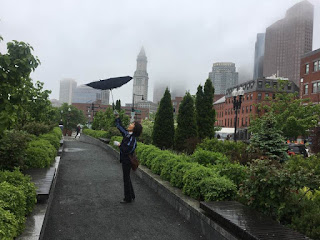 On a beautiful Memorial Day Sunday morning in Poughkeepsie, NY, the Vassar College class of 2017 stepped forth into the future. We were on hand to see our son Richard receive his B.A. in Geography. I can't believe how fast that four years went! An astounding, “small-world” aspect of this Commencement was that Vassar's Interim President turns out to be Jonathan Chenette, the father of KSO principal oboist Claire Chenette! A respected pedagogue and accomplished composer, he has had a work performed by the KSO's Principal Woodwind Quintet at the Q Series. It was truly a treat to hear his opening and closing remarks, and to see him hand out 612 diplomas and shake 612 hands.
Posted by KSO blogger Andy at 11:43 AM No comments: