Thanksgiving’s feeding frenzy has slowed to a crawl, the traffic at the mall is speeding up to a crawl, and now it’s time to concentrate on the music of the season. The KSO’s November edition of the Chamber Classics series has the Knoxville Chamber Chorale joining the Chamber Orchestra for a program of light Christmas favorites. The KSO’s use of the Bijou for a concert of seasonal music is the first of its kind, and the response has been such that I must say, both proudly and regretfully, that the show is sold out!

The first half of the show boasts some essential chamber orchestra works, including Mozart’s German Dance No. 3 (the “Sleighride” portion is translated from the German “Schlittenfahrt”), Vaughan Williams’ Fantasia on Greensleeves, Corelli’s timeless “Christmas” Concerto, and Les Patineurs, “The Skaters’ Waltz,” by Emil Waldteufel. Of these, only the Vaughan Williams has any obvious melodic link to a present-day Christmas melody (What Child Is This?), but the rest of the works have attained elite status through their titles and their utter charm. Corelli’s Concerto VIII, Fatto per la notte di natale is a Baroque concerto grosso masterpiece on a par with Bach’s Brandenburgs. It’s not a “concerto” in the sense of having in-your-face virtuosity, it’s just that in the Baroque period, a multi-movement work was apt to be called a concerto if an orchestra was involved. Among Corelli’s strengths are his beautifully clean melodies and his use of “suspensions:” the alternately dissonant and consonant hanging violin weave that is so deliciously suspenseful. It is also remarkable how he makes minor-key music sound so joyful.

The Chorale will join us on the second half, with some beautiful John Rutter carol arrangements, Bach’s Jesu, Joy of Man’s Desiring, and Handel’s For Unto Us a Child Is Born. The Chorale will shine a cappella with the zany Jingle Bells Fantasy and an arrangement of Away in a Manger that is sure to melt your face. Hope to see you there, 2:30 at the Bijou, Sunday, November 29. (TODAY!)
Posted by KSO blogger Andy at 1:41 AM No comments:

A week when there are scheduled both KSO Youth Orchestra and Masterworks concerts is a great opportunity to witness Classical Music's present and its future.  This week has given us the future first, with Youth Orchestra concerts having taken place at the Tennessee Theatre on Monday, Nov. 16, and the Masterworks at the same venue on Thursday (tomorrow) and Friday at 7:30.

The all-Russian Masterworks concerts this week feature Rodion Schchedrin's “Naughty Limericks” (Concerto No. 1 for Orchestra), Tchaikovsky's timeless Piano Concerto in B♭, and Rachmaninov’s rarely heard Symphony No. 3.  Schchedrin, whose consonant-rich name is pronounced “Shed-rin,” has given us a zany whizbang of a work which musically depicts the type of folk poems called chastushki that were the underground poetry critical of the Bolshevik Revolution.  No type of sound was out-of-bounds for Schchedrin, including string players tapping bows on their stands, horn players spanking their mouthpieces, and all manner of prepared piano techniques.  Listen for the contrabassoon’s highly amusing part during a vamp, you won’t be able to keep from chuckling.

Pianist Stewart Goodyear will follow with an up-tempo performance of the Tchaikovsky Concerto. This and the Rachmaninov symphony that follow intermission are just brimmimng with Russian romantic content, and Music Director guest candidate Shizuo Kuwahara (who goes by “Z”) will bring it all together in style.  In the Rachmaninov, the second theme of the first movement and the solo violin melody that opens the second movement are tunes you may have heard on a record entitled "The World's 100 Most Beautiful Melodies," but a new beautiful tune is just around the corner in both works.

On a night when Donald Trump was causing a stir inside the Convention Center and protesters were stirring a cause outside of it, the KSYO kids were making music at the Tennessee.  The five ensembles got to play on the big stage, and in so doing captivated their audience.  What a wonderful room in which to hear music... 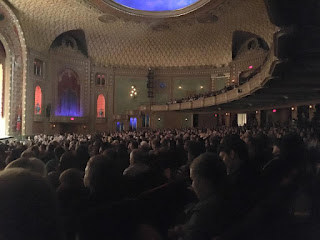 A proud moment for KSO bassist Dan Thompson, who helps out in the Youth Orchestras.  He got to sit right behind his son, Nicolas.  It doesn’t get any better than that. 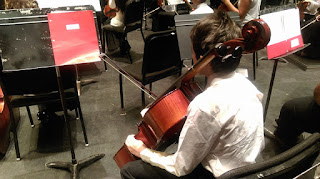 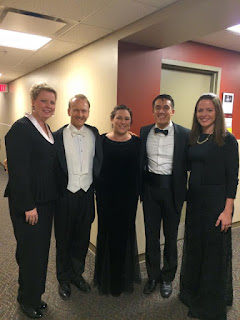 Posted by KSO blogger Andy at 11:05 AM No comments:

This Wednesday at noon, it will be time to make a date with the KSO's Q Series. Knoxville's newest classical venue, The Square Room, will be alive with music for the string and woodwind families. A box lunch is included in the $15 advanced purchase admission. Same-day tickets, if any, will be $20 at the door. This is a majorly affordable opportunity to see world-class chamber music come to life. Attendees should please be aware that there will be a Veterans Day parade on Gay St., which will go from 10:45 a.m. until almost showtime.

The Principal Woodwind Quintet will start the show with Anton Reicha's Quintet for Winds, Op. 88, No. 2. Reicha (pronounced to rhyme with “like a”) was a contemporary and lifelong friend of Beethoven, and well-known for his teaching and his treatises on composition. Among his composition students were Franck, Liszt, and Berlioz. Some of the concepts in his treatises were way ahead of their time, forecasting techniques that would not be widely used until the 20th century, such as polytonality and the use of quarter-tones. (Imagine notes existing BETWEEN the piano keys, which are ordered by half-tones or half-steps). While his theoretical work was so advanced as to be considered heretical in its time, he had the sense not to employ these techniques in his own compositions. Reicha was to the woodwind quintet repertoire what Haydn and Mozart were to the string quartet repertoire.

The Principal String Quartet will conclude the concert with Mozart's String Quartet in B♭, K. 458, “The Hunt.” The third of six quartets dedicated to his friend Franz Josef Haydn, “The Hunt” is full of jolly, equestrian swagger, excepting the Adagio third movement, which is lush and tender. Note that the subtitle of the work did not originate with Mozart, but was assigned by a group of quartet-playing hunters after they decided that the tempo of the 6/8 first movement perfectly matched their horses’ canter. (I don’t know if this is true, but hey, it sounds reasonable).

Come on out and see us!
Posted by KSO blogger Andy at 12:26 AM No comments: