Do Not Dally, Come See Our May Finale

The Masterworks season finale concerts are always a memorable event, and this year is no exception.  There will be a variety of “looks” to the repertoire on these concerts, and it will mark the first appearance of a Keytar in our midst.  Each half of the concert will feature a 21st-century work followed by a standard repertoire classic. Opening will be Mason Bates' 2011 composition Mothership, a purely fun work which sees the orchestra sallying forth into the realm of electronica. The keytar is a small electronic keyboard instrument that is slung around the neck like a guitar, hence the name: KEYboard-guiTAR.  Christina Horn, from Knoxville band Hudson K, will supply the keytar wizardry and Jorge Variego will jam on bass clarinet in the improvisatory Bates work.  Strauss' tone poem Till Eulenspiegel's Merry Pranks will close the first half.  After intermission, we shall present music from the 2002 film Catch Me If You Can composed by movie music luminary John Williams. Entitled Escapades, it is essentially a saxophone concerto featuring saxophone soloist Timothy McAllister, backed up by KSO principal bassist Steve Benne and vibraphonist Clark Harrell. The concert (and the season) will conclude with Beethoven's beloved Symphony No. 5. 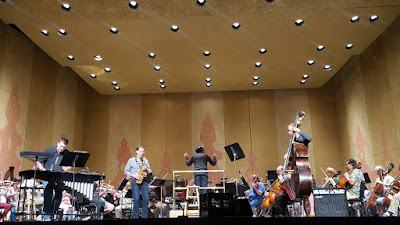 Let me clear the air about the Strausses.  There were a bunch.  The one generally known as “The Waltz King” is Johann Strauss Jr., he of “Blue Danube” and Die Fledermaus fame.  His father, Johann Sr., is most remembered for his Radetzky March, which we performed on our most recent Bijou and Maryville Park concerts.  Hey, let's not forget Josef Strauss, Junior's brother, who blessed us with the Pizzicato Polka!  And there was, of course, Levi Strauss, a blues composer.  But no, none of these Viennese kindred; our Strauss du jour will be Richard, an early 20th-century German composer who took up where Wagner and Brahms left off.  His Till Eulenspiegel's Merry Pranks has a cartoon-like, slapstick pace, genius orchestration, and a very prominent e-flat (soprano) clarinet part. Here is just one page from the Strauss score. 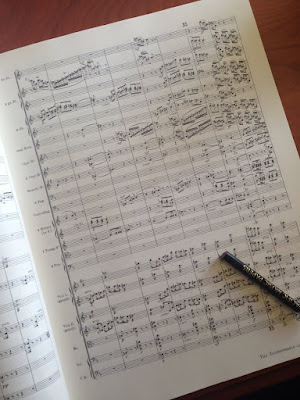 Some of my earliest musical memories are of a scratchy LP on our hi-fi, playing Beethoven's 5th.  As I recall, the first movement was far too scratched to play, so I skipped ahead to the second movement. I only remember being able to hear the loud parts of the third movement, and the finale is all loud, so as a punky little 4-year-old, I certainly remembered that.  Fast forward 50-something years, and with a dozen or more performances of the work under my belt, I am still amazed at how the second movement Andante con moto can be so rich and so pure at the same time.  A theme and three variations are presented by the cellos and violas; the one set of excerpts that has been on virtually every orchestra audition I've taken in the past 35 years.  (I wasn't thinking about that at age 4, trust me).  The extended coda patiently and gracefully winds down and even morphs into the centuries-old European theme La Folia.

These concerts will happen Thursday and Friday, May 18 and 19 at 7:30, at the Tennessee Theatre. Hope to see you there!

On Saturday, May 6, the KSO will host iconic jazz/rock band Blood Sweat and Tears at the Civic Auditorium. This will be a repeat appearance by BS&T, who performed with us in 1999. 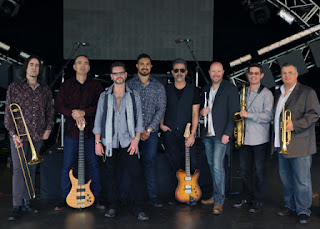 The late '60s saw two bands emerging as powerful forces in a “rock big band” genre that they alone created: Chicago and Blood, Sweat and Tears. Their successes soon inspired formation of similar bands such as Tower of Power, Cold Blood, and the Average White Band. Bands touring today such as the Dirty Dozen Brass Band and St. Paul and the Broken Bones owe a debt of inspiration to this groove outpouring. The difference was that while Chicago enjoyed a long span of hits, (each one seemingly cheesier than the last), they didn't have a number one hit until 1976. On the other hand BS&T's second, eponymous LP, released in late 1968, won a Grammy for Album of the Year, no mean feat considering they were up against the Beatles' last recorded album (Abbey Road), and Crosby, Stills and Nash's first. And if I may, BS&T's eponymous LP (actually their second) refuses to sound dated, whereas the political and “flower power” complexion of some tunes on the first few Chicago albums often has me reaching for the “skip” button on the remote.

As with most legacy bands, there have been quite a few personnel changes over the years, to the point where there are no remaining original members performing with the band. This should not be of concern, as the “sourdough effect” of shared experiences between old members and new has kept the spirit of the original band alive. You don't go to a Yankees game expecting to see Babe Ruth and Joe DiMaggio, one would hope, and in music, it's the same story.

Come on down to the Civic tomorrow night! What you'll hear will make you So Very Happy.

Posted by KSO blogger Andy at 12:59 PM No comments: