I can’t remember the year, they have all seemed to blend together into puddles, like “the 80's” or “when Thomas was watching Lambchop,” but somewhere back there we had EmmyLou Harris as a Pops artist and I couldn’t believe I was going to share the stage with her. She is the only artist I have both paid to see AND played with. One song I remember vividly was Rose of Cimarron, but I really wish she had done this Beatles tune. I love her description of it: "Way more than three chords".

Rosemary Clooney came to Knoxville in 1999 in the twilight of her career, but it was such a joy to hear her sing Tenderly,  a song I am trying to convince my band(s) to do.

Spring of Y2K sported  probably the most power-packed Pops line-up that I can remember. The artists that year were Monica Mancini, Ben E. King, Doc Severinsen, and the Smothers Brothers. Ms Mancini’s voice was a breath of fresh air, proof that she was not merely riding on the coattails of her ultra-famous father (who, by the way, was a Pops artist a couple years prior). Ben E. King was a perfect gentleman as well as an engaging performer, Doc Severinsen was entertaining in many ways, (catch him back with us on April 13, 2013!!), and the Smothers Brothers were just plain ridonculous.

Today happens to be violist Jennifer Bloch’s birthday! In her honor I have selected a blast from the past, via a forgotten Pops act. (This particular Youtube video has the fewest "hits" but IMHO it is far and away the most honest and entertaining version). A Stephen Sondheim song whose lyrics just, umm, drove us crazy.

Art Garfunkel was maestro Trevor's final Pops artist, and I was thrilled to accompany one of "America's Beatles." While it was an absolute hoot to hear his 12-year-old son (who was a viola student of a very good friend of mine in NY) sing "Feelin' Groovy," flutist Cynthia D'Andrea and I struggled to find the point of doing a Randy Newman song entitled "A Real Emotional Girl." Inasmuch as Randy Newman's voice is an acquired taste at best, the song was somewhat improved by Garfunkel's ethereal voice. I would have just died if he sang "99 Miles from LA," but he didn't, and I didn't.


Posted by KSO blogger Andy at 8:12 PM No comments:


On July 6-8, the Calvin Smith Brass Festival took place at Oak Ridge High School. A good example of the festival’s popularity and draw can be found in the list of winners in the Brass Quintet Competition: the first three prizes went to groups from Lexington KY, Fredonia, NY and Clarksville TN. Word has it that a group from Hungary had applied, but couldn’t come up with enough funds- maybe next year!

A feature of this festival was the world premiere of a work composed in memory of Calvin Smith, entitled FECHOPS! by Ed Morse. The title refers to the license plate that Calvin had on his car which, translated from the table of elements, means “iron chops.” The performance of this fanfare, with tubist Sean Greene conducting, can be heard and seen here. The memory of a fine musician is well honored with such a quality festival, which I am told will be an annual event.

As I mentioned in a post from last year, a number of members of our orchestra play other genres of music. You may recall that a band called the Akashic Mysteries counts among its members oboist Ayca Yayman. On July 15, at the Preservation Pub on Market Square, the Mysteries played their first show in almost a year, accompanied by the projection of films by the Brothers Quay. In a sort of random way, their performance was fitting accompaniment to several essentially silent stop-motion animation Quay films (LINK) produced since the 80's. With an eclectic instrumentation including electric mandolin, (any band fronted by an oboe is eclectic, IMHO) my ears were reminded of the music of King Crimson and Camper Van Beethoven. The films were real eye-openers, with their surrealist and Dada influences. Although it was no surprise to me, having heard her often singing karaoke, Ayca sang on a couple tunes, (one song was Fascination Street by the Cure) and it was really quite captivating. After laying the oboe aside first, of course...

Posted by KSO blogger Andy at 3:59 PM No comments:

A Look (and a Listen) Back


In my rush to have a relaxing summer, it occurs to me that some events are passing me by that I should be letting you all know about. I’ll start with..... Rebroadcasts!!

A time-honored tradition of revisiting the previous season’s concerts is being carried on, Mondays through September on 91.9, WUOT-FM. Although the first two broadcasts have happened already, the majority of the ‘11-‘12 season is still ahead of us. Here is a link to the schedule.

Auditions last week and last month have yielded us principal horn and principal flute positions. In each case, temporary players have won their seats in a permanent way, so that means that the awesomeness that we experienced at the hands of (flutist) Ebonee Thomas and (hornist) Jefferey Whaley is here to stay!! What’s more, two violinists that were on leaves of absence last season are returning, namely Lisa Muci Eckhoff and Ikuko Koizumi. We’ve missed them! But by the same token we’ve really enjoyed having Ruth Bacon and Diane Zeligman here in town for the year and we will miss them also. Sigh.
Posted by KSO blogger Andy at 10:45 PM No comments:

Well, I WOULD have posted my 4th of July pictures yesterday if the danged power hadn't gone out. I was without power from 6:15 pm to 3 am, plus my phone battery was dead so I was pretty much not here yesterday. Everything seems to be fine now, but you never know. I better post quick. 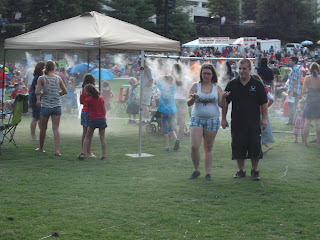 Misting stations were in evidence at the South Lawn. Although the musicians really could have benefited from this, we wanted to at least START the concert with dry clothes. 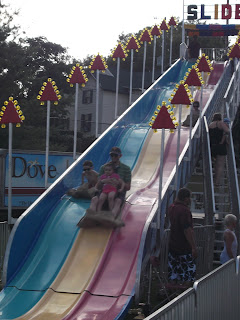 New this year (I guess) is this slide. Again, sadly, inadvisable for musicians' use. 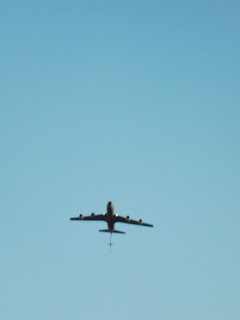 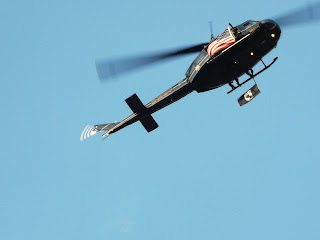 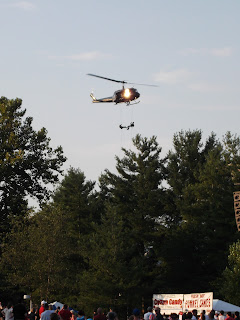 There was a flyover. Thankfully, off-limits to musicians. 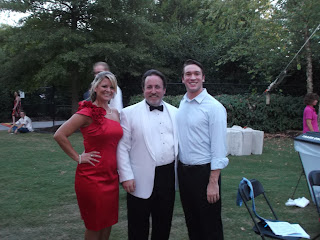 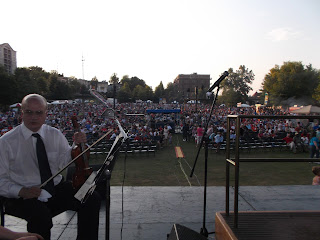 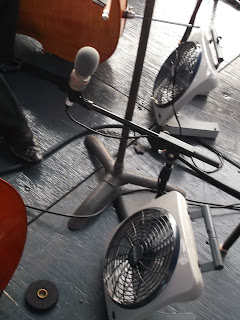 The cello section had some adoring fans, too... 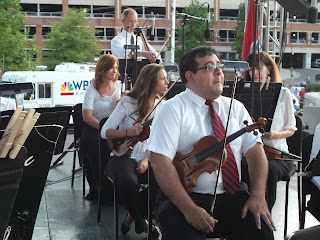 Players from years past often rejoin us for the concert on the 4th. Betsy Fee Elliott (sister of violinist Mary Anne Fennell) is at far right. 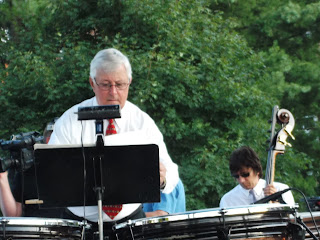 Tympanist Mike Combs and bassist Steve Clark gear up for the show. 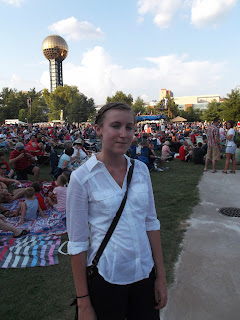 Cellist Stacy Miller could not be with us, but her daughter Cecilia made her debut with the KSO cello section! 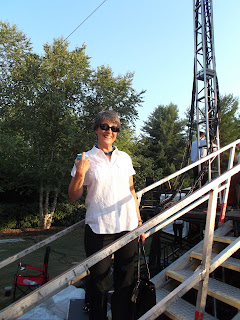 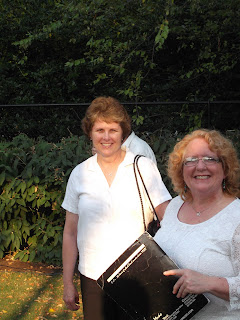 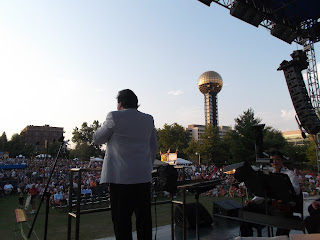