A Closer Look at the Clayton Concerts

I have to put in my two cents worth here, that this year’s Clayton Holiday Concerts are truly unforgettable. A wide variety of acts are interacting very intricately, and the pacing is captivating. When the Scottish Medley sequence on the first half ends (with a reel called Christmas Eve that isn’t listed on the program), it is just thrilling to know that a diverse collection of musicians and dancers such as us know exactly when that final downbeat is. The music keeps us on our toes and I dare say it makes you tap yours. 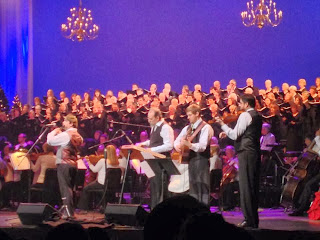 Four Leaf Peat with the KSO and Knoxville Choral Society

The bagpipe is as iconic an instrument as there can be. We are blessed to share the stage with Tracy Wilson, a gifted piper who teaches music at Dandridge Elementary School. Come to find out, he is related to Terry Wilson, music director at First United Methodist Church in Maryville! I remember playing First church’s Christmas services my first year in town here. As I recall, since I was new in town, I got a little lost and a railroad crossing caused me to just barely squeak in in time that Sunday. They also were VERY forthcoming with refreshments, and that became a deciding factor in later years on choosing which Christmas gigs to bring our children to. Lol. 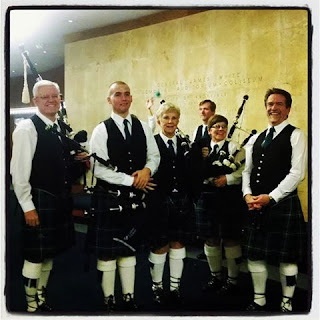 Another lol-worthy situation has occurred, wherein I have written up a dancer who is not actually involved with the performances we are doing. The link to the Maryville Daily Times article from my last post was certainly interesting reading, but not exactly relevant. We have on the stage with us an award-winning Highland dancer, Knoxville’s own Claire Macmillan. She is nationally ranked in her field of specialty, much as Tracy Wilson is in his. 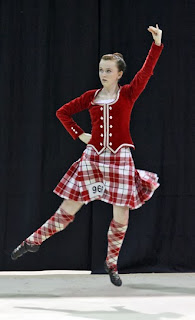 An interesting collaboration from October has reappeared, as the Hannukah Fantasy once again teams Lucas Richman with pianist Jeffrey Biegel as co-arrangers. Mr. Biegel, as you remember, was the soloist in the premiere of Lucas’ piano concerto. Maestro Richman also has his hand in other arrangements, such as the Singalong and the music for Santa’s entrance. A really giant tip of the hat should go to Warren Clark, who arranged a great deal of the Celtic music we are reading off of this weekend. There are very few venues for which Warren has not arranged something. Ijams Park, Martin Luther King Birthday concert, Pops, runouts; he can create a soundscape out of the barest minimum of sources in a believable, readable, and sometimes humorous way.

I understand that the concerts were virtually sold out! We are very grateful with the response and are overjoyed to create memories for so many people. Have a cheery and safe holiday, Y’all!
Posted by KSO blogger Andy at 11:27 AM No comments:

Clayton Concerts Get Their Irish Up

This weekend brings the twenty-somethingth annual Clayton Holiday Concerts to the Civic Auditorium! I believe the inaugural Clayton was my first season here, but now I’ve even lost track of that tally. Okay, twenty-eighth, says my abacus. This year’s shows will be given a Highlands treatment, with appearances by local specialists in all things Celtic. Go! Contemporary Dance Works, Boyd’s Jig and Reel house band Four Leaf Peat, Knoxville Pipes and Drums, and the Knoxville Choral Society will all “throw down” this Friday and Saturday nights at 7:30, and Saturday and Sunday afternoons at 3:00.

Go! Contemporary Dance Works has appeared with the KSO on numerous occasions, and you will be seeing dancers who are veterans of previous years’ Nutcrackers. It will be a treat to have fine ballet grace the Civic stage for the second time in three weeks. A quick stroll down Google Lane found this article in Maryville’s Daily Times about one Go! dancer’s experiences. The article isn’t about these concerts per se, but it’s still a very honest and engaging look into the ballet life.

Four Leaf Peat is the band you are most likely to want to hear if you are walking in the Old City craving a jig or a strathspey. Winners of the Del Rio Days’ Band Contest, the Peat have recently been seen at The Square Room, the Laurel Theatre, and Tennessee Shines, and they opened for Jean Redpath at the Rugby Village Festival in May. Their drummer, Jason Herrera, is also known to us Symphony players through his work as wigmaster for the Knoxville Opera Co. It’s always nice to see his smiling face at work!

I can’t picture a Clayton concert without the Knoxville Choral Society. I’m listening to them right now on their website. They have mellowed like fine wine under the watchful ear of Eric “Doc” Thorson, and the young artists’ competition that they endow is one of the essential young musicians’ contests in East Tennessee. Knoxville Pipes and Drums will bring it all home with the timeless sound of Celtic bagpiperie. You, the audience, will be featured in the singalong, and maybe... just maybe, tuba player Sande MacMorran will wear a kilt...
Posted by KSO blogger Andy at 11:17 AM No comments:

As our Nutcracker run reaches the halfway mark for 2013, it bears mentioning that one of our players, 2nd trumpet Marc Simpson, has a daughter in the ballet! 13-year-old Julie Ann dances a soldier and a sugar-plum attendant in three different scenes, and has danced with Amy Morton Vaughan’s Appalachian Ballet Company for several years now. It is a source of great pride to create performing art with one’s child; it’s a pity, though, that the orchestra’s presence below the stage prevents seeing the action. Julie Ann’s eldest sister Valerie also danced in the Nutcracker in the late 90's. I am wracking my brain trying to remember if their have been other KSO players with children dancing the Nutcracker and have asked around; it may be that the Simpsons are unique in their participation. Anyone who knows otherwise should chime in, please!

In the pit for the Nutcracker this year there are several new players; bassoonists Aaron Apaza and Garrett McQueen, principal trumpet Chase Hawkins, and French horns Gray Ferris and Sean Donovan. Their assimilation into the sound of the orchestra has been quite seamless, and the new personalities within their individual sounds lend a new dimension to the characters to whom they link on stage. The remaining performances will be in Maryville at the Clayton Center for the Arts.

Another new feature of the Nutcracker this year is the presence of new parts to play from! If there were any bumps in the road to preparing the ballet this year, it was the correcting of some wrong notes, which inevitably get printed in a new edition, although the old edition was frighteningly inaccurate. I’ve been told that wrong notes in some editions are printed intentionally, so as to allow copyright extensions (I’m not totally clear on that). In any case, some of the old parts got recycled into parts to use on “run-outs” (like the one the Knoxville Symphony Chamber Orchestra is playing at the Athens City Middle School at 7:30 tomorrow night). I’ve included some artwork from these old parts. There have been some accomplished doodlers who have left their mark over the years during the inevitable downtime that occurs during rehearsals... 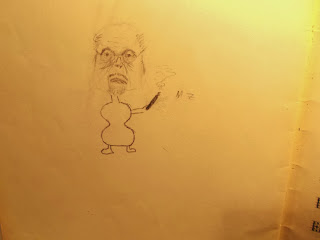 This rendition of former Concertmaster Marc Zelmanovich was done by a violist who has since left town... 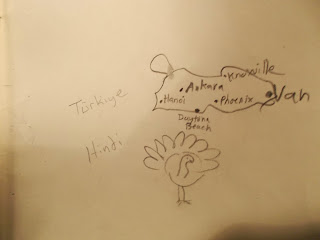 My stand partner, a native of Turkey, explains the difference between the name for his homeland and what his family has just eaten for Thanksgiving... 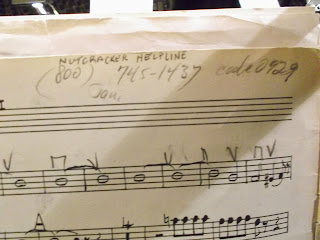 I have often wondered if there were numbers to call for help with other works by Tchaikovsky... 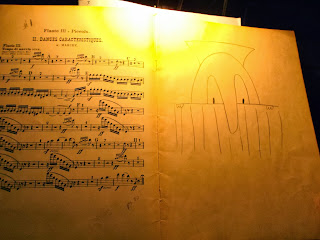 This is the piccolo part from which Cynthia D'Andrea has been playing since who knows when. The drawing of Kilroy was done when she was hired (?) to play, at age 13, for a production done by WATE.


Posted by KSO blogger Andy at 2:34 PM No comments:

I’m learning a lot about Christmas carols tonight. For one thing, I had simply no idea that the most popular setting (but by no means the only one) of In the Bleak Midwinter is by Gustav Holst! A setting by Holst’s countryman Harold Darke is lavish and pristine all at once.

Their settings of English poet Christina Rossetti’s text are equaled by that of Katherine Kennicott Davis, no doubt, as Ms Davis is the composer of The Little Drummer Boy. It sure is fun to play that with Mannheim Steamroller, I tell you what. I couldn’t find her setting of Midwinter on Youtube, but I know some choral directors who might steer me towards one; stay tuned and I'll see what I can find. I’m curious about it because it is SSA; the tessitura, or range, is higher than a standard choral scoring. (SSA is soprano-soprano-alto, for those unfamiliar with choral music lingo, as opposed to SATB, for instance). She studied at Wellesley College in Boston, and also with Nadia Boulanger in Paris, I earnestly HOPE I don’t need to tell you how many composers studied with Madame Boulanger... Copland, Carter, Piazzolla, Menotti...

Later in her life, Ms Davis taught at the Shady Hill School for Girls in Philadelphia, but she probably missed by a few years late the organist Lewis Redner. Mr. Redner played at several churches in Philadelphia and dealt in real estate. In his spare time, somehow, he came up with the tune for O Little Town of Bethlehem, somehow hooking up with that carol’s lyricist, Phillips Brooks.  A great-grandson of the founder of the Phillips Academy in Andover, MA. Mr. Brooks was a Rector in the Episcopal Church in Philadelphia, and is known for having introduced Christianity to Helen Keller during his tenure in Boston. The name of the tune for O Little Town is St. Louis. The irony here is that Katherine Kennicott Davis’ birthplace is... St. Louis, MO.

It is likely that one or more of the afore-mentioned was at least aware of an event that occurred in 1906. The first music to be broadcast on the air, from an AM “station” near Washington, DC, included a solo violin/voice performance of O Holy Night by Canadian-born Reginald Fessenden. It was on Christmas Eve,1906. 20 years before my father’s birthday, to give you some perspective. O Holy Night was written by Adolphe Adam, a Frenchman who studied composition against his father’s wishes in the 18-teens with Ferdinand Hérold, the composer of Zampa. (Here is a link to the overture to that opera). Nadia Boulanger’s father also studied with Hérold. Yikes.

Wow, now I get why people go into academia. You can’t make this stuff up.
Posted by KSO blogger Andy at 2:26 AM No comments: