The definition of the term “chamber orchestra” was imbued on me at a young age. The works of Bach, Corelli, Haydn and Beethoven, performed with more intimate forces, came across totally differently than with the “all hands on deck” crew.

In the Baroque, pretty much all they had was chamber orchestras, but as venues and instrumentation grew more grandiose and hyfalutin', people began to miss the olden days when there were soirees in CHAMBERS that essentially had no bad seats. Beethoven, Brahms, Grieg, Copland, and Richard Strauss recognized the potential in these musical textures and connectivity, and have composed music just for our Sunday afternoon chamber series this season!. If they only knew...

Leading off on September 28th, Beethoven brings it all home (well, most of it) with an overture and a symphony. The Coriolan Overture and his 4th symphony will sandwich an appearance by UT's Cello Professor, Wesley Baldwin, in Luigi Boccherini's iconic Cello Concerto. Some people ask, “did Beethoven even write a 4th Symphony?” but there it is, sandwiched in between the Rasumovsky Quartets and the Violin Concerto in the catalogue. Dr. Baldwin's colleague and our Resident Conductor, Jim Fellenbaum, will conduct.

Speaking of quartets, the KSO Principal String Quartet's usual April concert will happen in November this season, on the 2nd. We will be presenting Shostakovich's 8th Quartet and Beethoven's epic Op. 132 Quartet. I hate it when people refer to Shostakovich as “Shosty.” He deserves a more dignified nickname, like Rostropovich has; Slava. To me “Shosty” conjures up images of Shasta soda, or the “Mister Softee” ice cream truck that used to compete with Good Humor when I was growing up. It was soft ice cream, compared to the ice cream bars that Good Humor sold. (Sells?) ANYway, there is nothing sugar-coated about Shostakovich 8, and this much-revered late Beethoven quartet is so different a work from his 4th Symphony that you won't believe it's the same composer. Venezuelan composer Efrain Amaya's Angélica will be the perfect palate-cleanser.

First thing back from the holidays will be our January 11th Orchestra Soloists concert, with concertos by Stamitz (trumpet) and Mozart (bassoon). New fellers Chase Hawkins (trumpet) and Aaron Apaza (bassoon) will lead the charge. On the second half, EVERYone will get a solo in Strauss's Le Bourgeois Gentilhomme Suite, a quirky and beloved 20th -century neo-Baroque work which has become a hallmark of the chamber orchestra repertoire. It's pronounced “boor-zhwah zhon-tee-yum,” and was last performed here in April 1995, when Phil Hansen was our principal cellist. Way too long ago.

Although March 1st isn't technically a spring date, James Fellenbaum and the KSCO's offering of Copland's Suite from Appalachian Spring will make it so at the Bijou. Starting with Grieg's Holberg Suite and weaving through music of Honneger and Webern, this is as varied a chamber orchestra concert as one could imagine. What's more, the Go! Contemporary Dance Works will be adding their talents in the Copland, augmenting the springtime ambiance.


Lucas Richman's final appearance with us at the Bijou Theatre will be May 3. The program features three luxurious works whose scope and sentiment suits the Bijou-- and the occasion-- perfectly. American Composer William Schuman's Symphony for Strings dates from the year before Appalachian Spring but comes from quite a different place. The strings will then get a rare break and Richard Strauss' Serenade for 13 Winds will finish up the first half. A word has been coined for the skill required to produce such beautiful music for winds: it's called “bandstration.” Like orchestration, but with a band. The grand finale, and another long-awaited return, will be Brahms' First Serenade for Orchestra. It's pretty much a six-movement Brahms Symphony, and if you're like me, you know there ain't no such thing as too much Brahms.

This is a star-studded Chamber series, and I Can't Wait! Please join us! All concerts start at 2:30 at the Bijou Theatre.
Posted by KSO blogger Andy at 9:04 PM No comments:

Never to be "forgotten"

On Saturday, a very special honorary event took place at the James Cox Auditorium on the UT campus. A contingent of Korean War veterans was honored and feted for their distinguished service. The ceremony included a presentation of medals to the veterans by Korean General SeungWoo Choi, a sword dance, a fan dance, some martial arts demonstrations, and a performance by a traditional Korean orchestra.

Resident Conductor James Fellenbaum led a small orchestra, which included past and present KSO members and KSO Youth Orchestra Manager Kathy Hart's Suzuki Hart Strings in a performance of the Armed Forces Salute, heard recently at the 4th of July concert. As each branch of the service had its respective march played, veterans of those branches stood and were recognized with applause.


You learn something every day. What I learned, through reading the News-Sentinel item, is that our own Eunsoon Corliss, (assistant principal violist), is vice-president of the Knoxville Area Korean Association! She was quoted extensively at the end of the article, and her beautiful words made it plain that this event-- and these veterans-- meant the world to her. She is also responsible for these fabulous pictures of the dancers and of little Kiri, Fellenbaum (daughter of Jim  and Sarah), who had the distinct thrill of meeting the fan dancers and their fans... 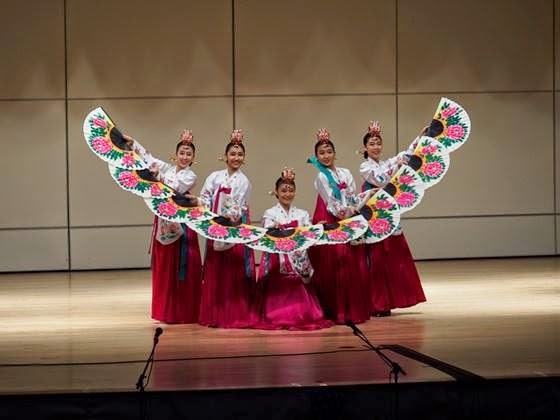 So beautiful, colorful and and precise... 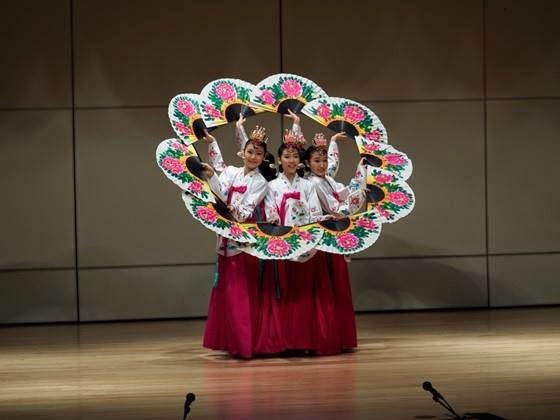 Who is that behind the fan?? 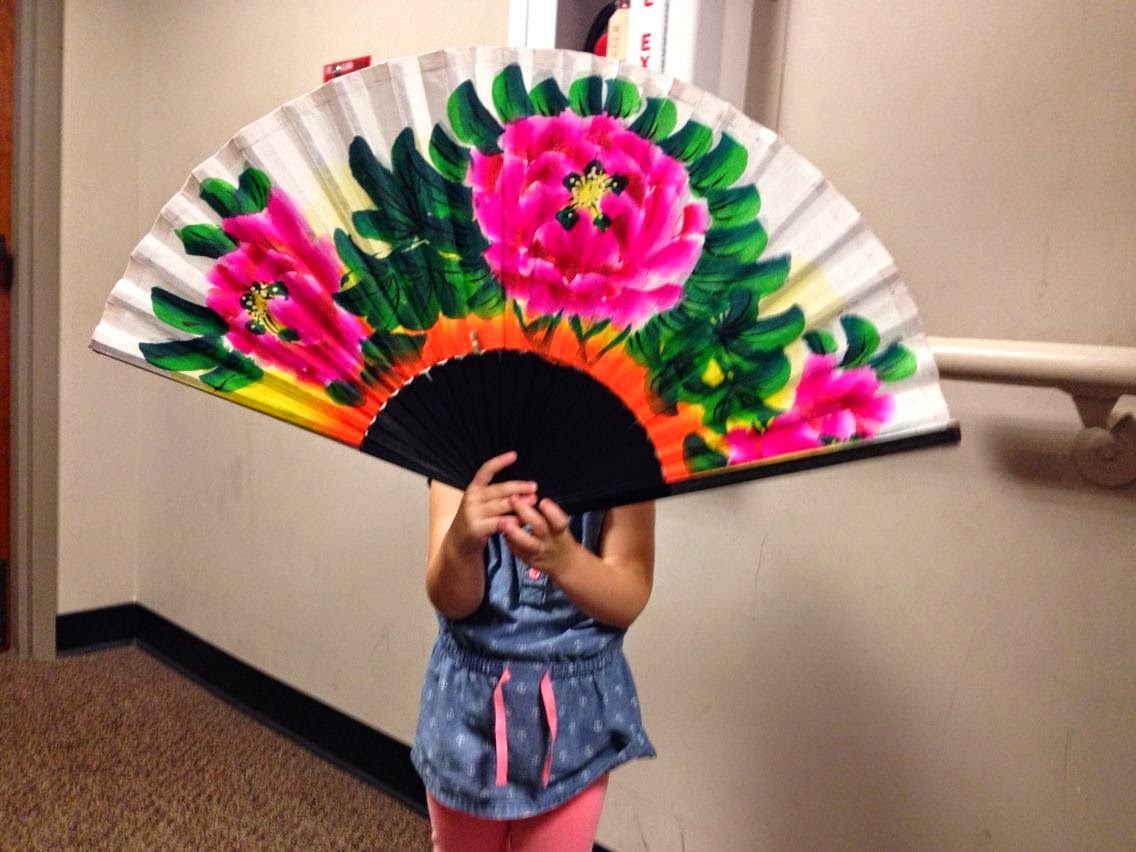 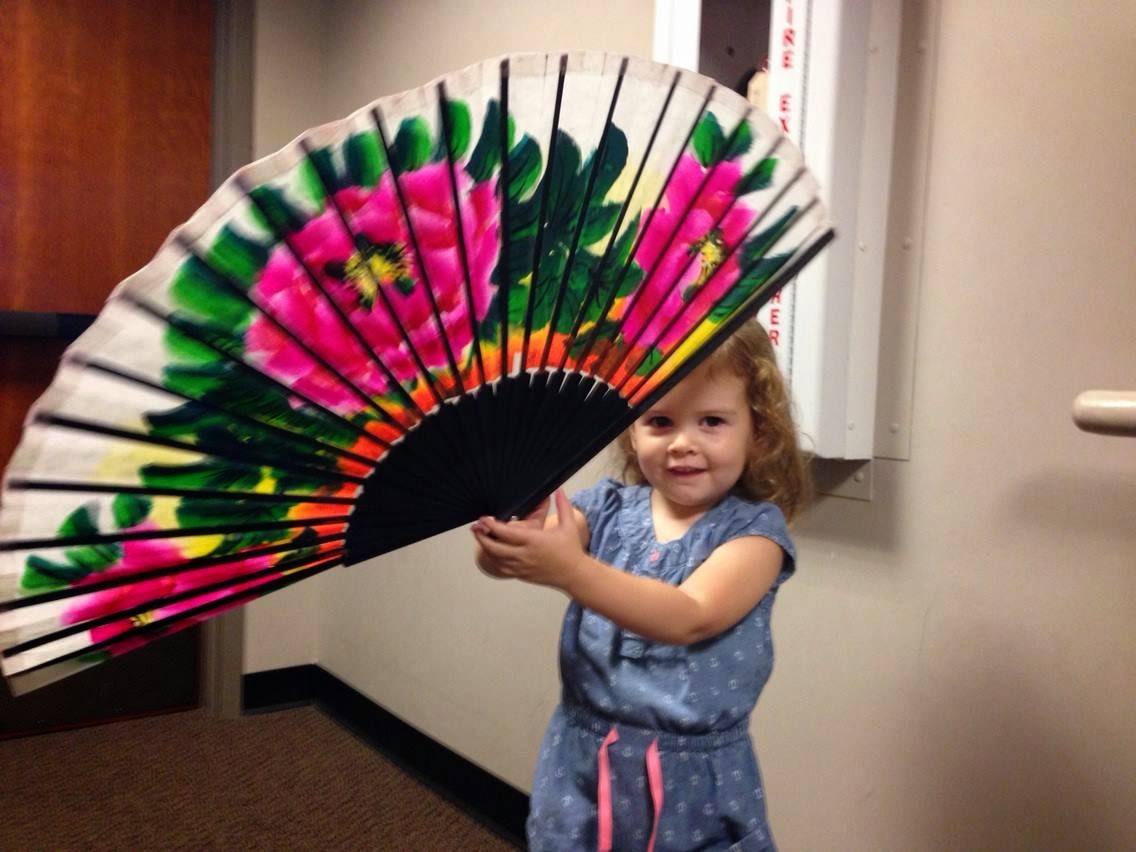 Posted by KSO blogger Andy at 10:58 PM No comments:

It may have slipped by, bundled in with some other KSO news as it was on my June 6th post, but a great fundraising opportunity for KSO fans will still be available until August 21. The First Tennessee Foundation, the philanthropic arm of the First Tennessee Bank, is holding an online grant vote, the prize from which is $5,000 for whatever non-profit organization totals the most votes each day. This is all to celebrate First Tennessee Bank's 150th birthday, which was March 25th. There are WAY more than 150 nonprofits participating in the contest, so it is by no means a slam-dunk to get an award; there are 68 REMAINING entries under the letter “T” alone.

It is often said jokingly on election day, “Vote early and often,” but with this contest, you actually can! You are allowed to vote from MULTIPLE DEVICES for (the KSO and) up to 10 nonprofits EVERY DAY. We're shooting for the week of July 21 (next week) for a big push to vote. So log on to their website, tell a friend, tell your boss, tell your DOG if she's online. You don't need to be in Knoxville, or even in the USA to vote, and the “captchas” are easy to read. It IS a popularity contest. Share this link which leads you to the vote and explains things with much more detail and quality than I am capable of, in a charming video.

Speaking of voting, I feel the need to remind those of you in the Knoxville area, there is a very important election coming up on August 7th. Make sure you get out and vote; no one can do it for you.
Posted by KSO blogger Andy at 11:59 PM No comments:

In our last episode we looked at the first four Masterworks concerts, up to the January pair. February's (19th and 20th) pair will consist of a single work, Dvorak's Stabat Mater. This will be a new one for me, I believe, although the Knoxville Choral Society performed a Dvorak choral work at Wallace Memorial Baptist Church many, many years ago that may have been this. Dvorak's rich musical language is perfectly suited to this very touching text.

On March 19th and 20th we will welcome Maestro James Feddeck to the podium and pianist Conrad Tao to the footlights. Mr. Tao will be performing Mozart's Piano Concerto in C, K. 503. It is always nice to hear some of the less-frequently performed Mozart Concerti, such as the A Major concerto we performed this past January. The Mozart will be bookended by Rossini's iconic Overture to William Tell and Mendelssohn's Third Symphony, the Scottish. This concert is bookmarked in my mind because of the gigantic cello solo and tender cello quintet that open the Rossini. Ascending arpeggios in the solo cello part are supposed to represent a sunrise. I have always wondered, with five such arpeggios, what kind of solar system this opera must have been composed for, to have five suns rising every morning! It must be a hot place. Later on in the work comes an English Horn solo, which has been quoted in countless Bugs Bunny cartoons, and the famous “galop” (aka “the Lone Ranger”) closes the work.

The April concerts will start off with a bang. Bedrich Smetana's Overture to The Bartered Bride is a relentlessly exciting work that helped earn Smetana the title (in the Czech Republic, at least) of the father of Czech music, over and above (and slightly before) even such a force as Dvorak. Pianist Antti Siirala will then perform Rachmaninov's Piano Concerto No. 1, and guest conductor Vladimir Kulenovic will wrap things up with Beethoven's Symphony No. 6, Pastoral. I probably don't have to say this, but I will anyway: this is not the Pastoral Symphony from Handel's Messiah, which at the hands of lesser choral conductors becomes the musical equivalent of Sominex. Au contraire, this is Beethoven's “slice-of-life” symphony, with arguably the most amazing storm scene in the repertoire. It seems fitting to perform this bucolic work in April, which happens to be National Straw Hat Month, National Garden Month, and Grange Month.

All of this is leading up to Lucas Richman's final concert with us on May 14 and 15. This eclectic concert will be jam-packed with goodness, starting with Beethoven's powerful Egmont Overture. Concertmaster Gabe Lefkowitz will then be the soloist in the Tchaikowsky Violin Concerto, with the famous first movement after which everyone always claps. The second half of the concert will feature the Adagio (slow movement) from Mahler's Symphony No. 10, and Ravel's dazzling La Valse.

I Can't Wait! All concerts are at the Tennessee Theatre and start at 7:30.
Posted by KSO blogger Andy at 8:39 AM No comments:

Such a perfect day

It's here! The founding fathers had exactly such a day as today in mind when they were picturing a 4th of July celebration. It's 82 degrees and sunny, and memories of rainy 4ths in 2009(?) and 2013 shall be banished. In fact, record low temperatures are possible tonight, so hold on to your glow sticks, people..YOU ARE GONNA NEED A JACKET LATER. I never thought I would say that in July. In Knoxville.

Parking is very much available right now. There are typically more people on Market Square at the Saturday farmer's market than there were when I just came through downtown a few minutes ago. (3:00 pm). While you may find a dandy space, consider what it will be like when leaving. The 11th St. garage is very close to the venue, but traffic can be pretty gnar afterwards. It's a good place to park if you are going to stay downtown or on the strip after the fireworks; by midnight- but maybe not much before- it should be cleared out. Sometimes parking downtown is a good option, if you don't mind walking. It's a long schlep with a cello, but I've done it.

Please come join us in  Lucas Richman's final 4th of July concert, tonight at 8:00 at the South Lawn of the World's Fair Park!! God Bless America!
Posted by KSO blogger Andy at 3:17 PM No comments: