The News Sentinel Pops series for the 2016-17 KSO season offers a range of attractions that appeal to Baby Boomers, Celtic music fans, and kids at heart. Two of our guest acts have been with us before, Blood Sweat and Tears, and Natalie MacMaster. The other four acts are Pet Sounds (a tribute to the Beach Boys), Mary Wilson from the Supremes, Windborne Music's tribute to Journey, and a showing of The Wizard of Oz with orchestral soundtrack accompaniment.

First off, on FRIDAY, October 7 at the Tennessee Theatre, 8:00, the Beach Boys trendsetting album Pet Sounds will be reproduced in its entirety, with giant hits Wouldn't It Be Nice, Sloop John B, and God Only Knows topping the bill. On the second half will be a collection of the Boys' earlier hits, which scarcely need an introduction. Then on January 7, we're off to see- and play- the Wizard, which is just as good the 15th time you saw it as the first. I have a recent fond memory from this past March of watching this with my mother, who saw it first-run when she was 12. I sure hope the charts for it are available way early, because (typical of films of the Technicolor Age) the score is chock full of notes and details. (This show and all that follow will be on Saturday nights at the Civic Auditorium at 8. I have learned my lesson from two years in a row of misstating both the night and venue of the season's first Pops production, which will be on a Friday at the Tennessee Theatre).

Mary Wilson is a 60's survivor with a long list of humanitarian cred, and she will be bringing the Supremes catalog to the Civic on February 4. If this is going to be anything like last season's Fifth Dimension concert, you can expect to get up and dance. The question remains whether Ms Wilson will summon me to dance the way Florence LaRue did during the Fifth Dimension's show. Just in case, I had better get to work on some of those dance moves.

Next up on our Pops journey will be... Journey! Windborne Music has done it again, this time with Steve Perry and the gang's monster hits like Wheel in the Sky, Any Way You Want It, Lights, and two perennial wedding and karaoke favorites, Open Arms and Don't Stop Believin'. I personally hope they delve into Steve Perry's solo catalog, with songs like Oh, Sherrie and Foolish Heart. This will happen on March 11.

Natalie MacMaster will bring back her rollicking, dancing, fiddling extravaganza to us on April 8. (It isn't Saint Patrick's Day, but it IS National Zoo Lovers' Day)! Her stage persona is high-energy and her technique is jaw-dropping. Our Pops finale will be an encore appearance by Blood Sweat and Tears on May 6. While David Clayton Thomas is no longer with the group, the band has, over the decades, continued the tradition of tight coalition that made their eponymous 2nd album one of the most beloved discs ever. With songs like Spinning Wheel and You Made Me So Very Happy, it is one of my go-to albums when I need to hear something tight and tasty. 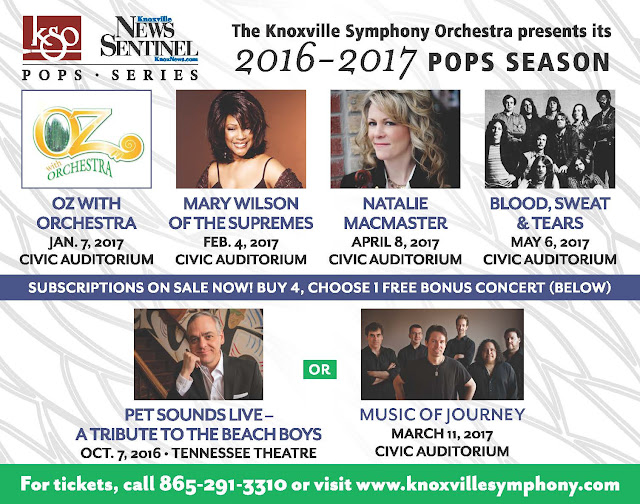 Posted by KSO blogger Andy at 9:39 PM No comments:

New Faces and Old Traditions on the Fourth

World's Fair Park, South Lawn! Tomorrow! The weather-guessers are in agreement that the likelihood of rain will be very low, and all Americans are agreement that this will be the most well-deserved Independence Day celebration ever. Our new Maestro Aram Demirjian will be at the helm, leading the KSO through heroic and traditional patriotic fare in his premiere as Music Director on the FREE 32nd annual Pilot/Flying J Independence Day concert.

The position of Music Director comes with a variety of opportunities to provide emotional leadership to a community through music, and just such an opportunity has arisen with the recent passing of Pat Summitt. One of his first duties will be honoring the legendary UT women's basketball coach with a moment of silence and a visual tribute (in conjunction with WBIR-TV Channel 10) that will play while the orchestra performs Rocky Top. There is no better venue than this great stage for Aram to get his baptism into Big Orange Country.

The larger civic celebration known as Festival on the Fourth will be a bigger-than-ever party, with special touches (such as the base of the Sunsphere being illuminated with red, white and blue lights in honor of Knoxville's 225th anniversary) and a variety of entertainment options throughout the day. Earlier in the day on the South Lawn, Americana band Kelsey's Woods will be performing at 4:15, and pop/rock cover band Fourkast will perform at 6:15. The KSO's performance,will start at 8, while the fuse of the fireworks display will be lit at 9:35.


Come out and see us! And fly that flag high! 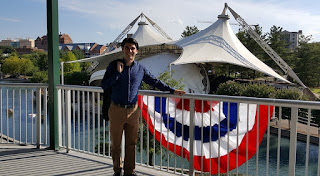