Anyone who has lived in this town for more than 10 or 15 years cannot deny the spectacular growth that the city has experienced in that period.  This “crescendo” has been encapsulated by the boom in craft breweries, ignited by a national trend thereto.  Knoxville currently boasts at least ten of these institutions, where ten years ago there might have been one.  The KSO has partnered with several of them in presenting a new and unique music-centric experience called “UnStaged.”  The idea is to bring classical music away from the concert hall, and present it in a more intimate setting in a more informal and thirst-quenching way.

Two promotional performances – “appetizers” – have already taken place at beer terminals in town, and a third is just a couple days away.  On October 5, cellist Stacy Nickell and violinists Ruth Bacon Edewards and Rachel Loseke performed at the Pretentious Beer Company on Central Ave. in the Old City.  The late Classical music patriarch of Knoxville, Norris Dryer, would have been so proud knowing that not only has a brewpub opened up below his old apartment, but also that classical music was being played there!  On the following Thursday, principal bassist Steve Benne, principal oboist Claire Chenette, and violinist Zofia Glashauser performed WAY out west at the Blackhorse Pub and Brewery.  Coming up this Thursday, November 2nd at 5:30, principal bassoonist Aaron Apaza, principal flutist Hannah Hammel and violist Eunsoon Corliss will hold court at the Casual Pint of Downtown at 421 Union Ave., next to the Oliver Hotel.

The main UnStaged event will take place on Thursday, November 9th at 7 pm at The Standard on Jackson Avenue in the Old City (next to Sweet P's Barbecue).  Compositions for various-sized ensembles will be performed in two different performance spaces within the venue, including Mozart's Symphony no. 40 and Milhaud's La creation du monde.  Beers from Alliance Brewing Co., Blackhorse Brewery, Crafty Bastard Brewery and Last Days of Autumn Brewing Co. will be featured.  Food will be tastefully provided by Knoxville caterer Nancy Kendrick, and between sets, the members of the KSO will mingle with concertgoers beer devotees.  The event is funded in part by a generous grant from the American Orchestras' Future Fund, a program of the League of American Orchestras. Tickets are here and include tastings from said brewers. 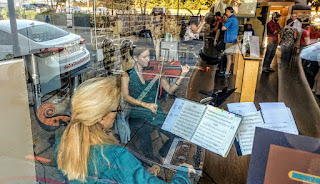 Outside looking in on the Oct. 5 Pretentious Beer Co event