Although you will be reading this a day late, I felt the need to note the birthday of a big influence in my musical cultivation.
Tom Nee brought a beautiful blend of dignity, benevolence and accuracy to the podium. He had been on the faculty of U-Cal San Diego's music department since 1967 and shaped that school’s innovative course. He served as music director of the Civic Orchestra of Minneapolis (1953-67) and director and co-founder of the Minnesota Opera (1963-67). He was music director of the New Hampshire Music Festival from 1960 until 1992, the last 8 years of which I had the privilege of experiencing. His passing three years ago at age 87 marked the end of a truly genuine musical personality. 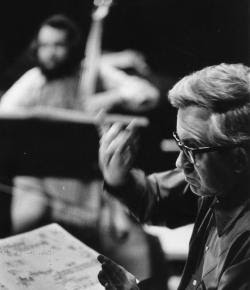 The NHMF is a dream festival that in actuality is a hiking jubilee set in the White Mountains of New Hampshire, with music-making filling the weekdays and weekend nights. The venue back then was Plymouth State University, which my father had attended on the G.I. Bill after WWII. Imagine my delight when I learned of an opportunity to play classical music in what I can literally call the Fatherland! (My dad taught public school in the Lakes Region of NH and his Dad lived in Laconia, so as a child my summers were spent nearby). The festival was truly a family affair; one summer in the early 90's, participants traveled to Plymouth with 24 children collectively under age five. All of the musicians were housed year after year in the same dorm, which was famous for its unisex bathrooms and Thursday night kegs. Pemigewasset Dorm was a block away from a house my family lived in before I was born. I would marvel while pushing our son Thomas in a stroller late at night past this house, on the same sidewalks that my siblings had learned to walk on decades before.
I made an impression on Tom, and I joined the Festival in 1985. My first concert under him included 2 world premiers and a work by George Antheil, closing with Brahms Third- an adventure, to be sure. Future summers featured work with Ken Burns, Alexander Bernstein (son of Leonard) and Joanna Feidler (daughter of Arthur). Nee’s rehearsal technique was workman-like and civil, peppered with his own dry sense of humor, which was documented on many a folder. My favorite was while rehearsing a particularly gnarly contemporary work, things were iffy and he said, “if someone has a prayer wheel, you may want to give that thing a spin for us.” Another time, after a violin passage could not be made to sound good with either choice of bowings presented, he suggested that the violins play with the bowing that suited each individual player- and it sounded amazing!
His final concert with the New Hampshire Festival featured marches– including this Swedish gem– and Mahler’s 4th. On the chilly late-August nights in New Hampshire, the final concerts of the festival during my tenure there provided the soundtrack to my drive back to Knoxville, and fond memories of a more formative time in my musical past come swooping down on me during subsequent performances of works I played under Tom Nee.
Posted by KSO blogger Andy at 1:57 AM