We Have the Technology...

There have been a whole lot of notes flying by my eyes in the past couple of weeks, but one somewhat extra-musical thing has happened in the KSO system that is quite noteworthy. For the third year in a row, the KSO has received a Getty Education & Community Investment Grant from the League of American Orchestras. This grant has enabled the KSO to purchase tablets for reading music. The future of music reading has arrived, and the KSO's Music and Wellness program reaps the benefits of this new technology. A task that used to involve setting up a stand, arranging music in the correct order (sometimes with huge, bulky notebooks and new books which reFUSE to lie flat and stay open) and searching for opportunities to turn pages, is now cut down to a single device which can store hours of music. Here is a shot of violinists Sean Claire and Sara Matayoshi, violist Eunsoon Corliss, and cellist Stacy Miller (and their tablets!) in action. 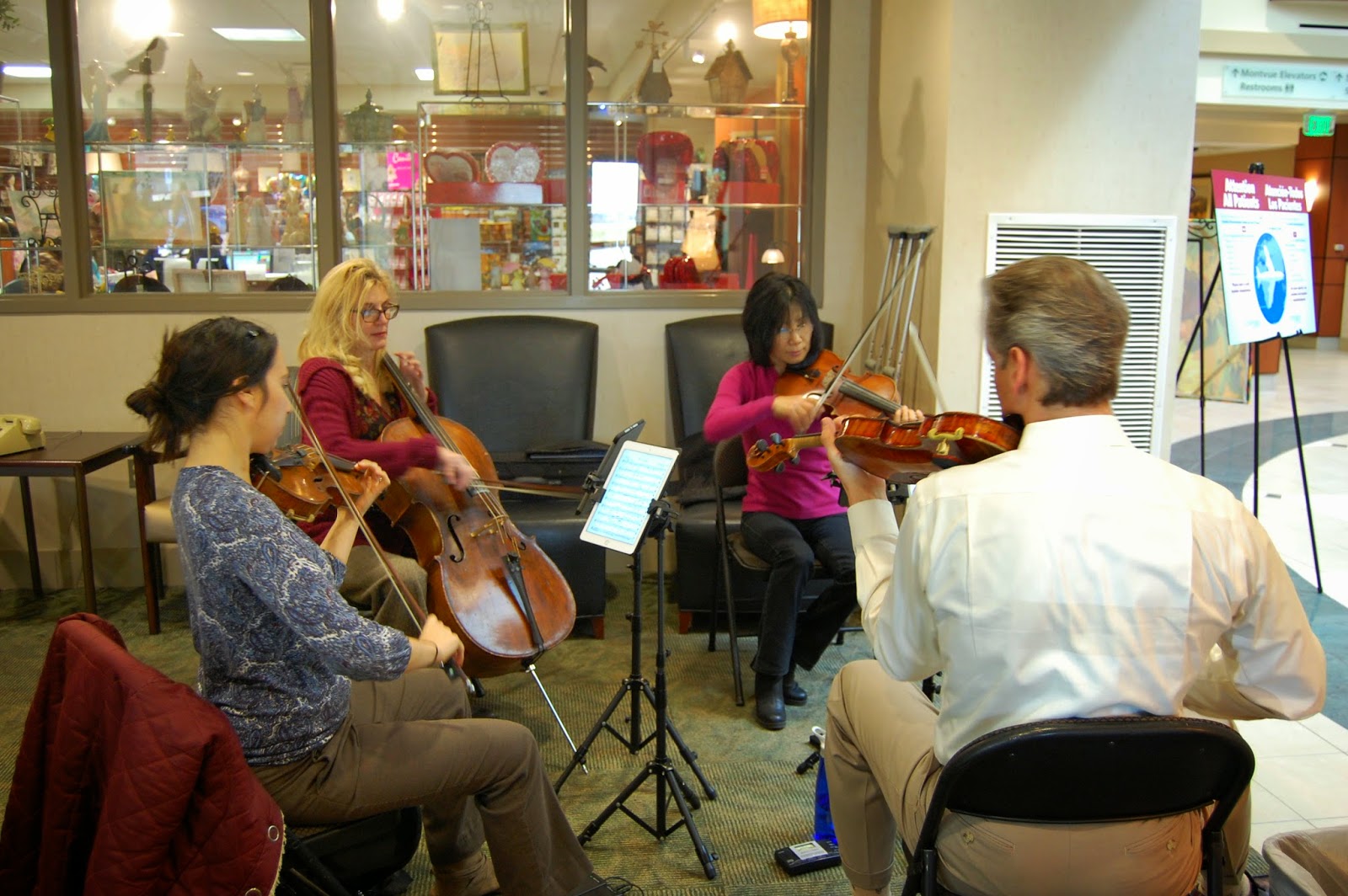 This weekend's Big Ears Festival collaboration with the American Contemporary Music Ensemble will bring the music of Max Richter to the Tennessee Theatre on Sunday, March 29 at 8:00. Mr. Richter is known for his score to the HBO series The Leftovers, excerpts from which will be performed along with his reworking of the Vivaldi Four Seasons. Phrases and motives are looped and stacked, giving Vivaldi's virtuoso concerti a techno-minimalist feel.


Just in time for warm weather's return, the orchestra will be taking a week off. I'd say we've earned it. While the KSO proper won't be performing this week, some members will be busy this coming Monday, the 30th with pianist Kevin Class as he wraps up his complete cycle of the Brahms Piano Trios. The concert is in the sumptuous new Powell Recital Hall at the UT Music Department. Details on the works can be found on my Feb. 16th post.
Posted by KSO blogger Andy at 12:10 PM No comments:

Hi, It's been a while, how are you? A lot of water has passed under the bridge since my last post, it's just a dizzying pace at which we proceed. I will offer a glimpse of what's coming up this Thursday and Friday nights at 7:30 at the Tennessee Theatre, but also a reflection on the last two weeks.

My 200-something-year-old cello and I have been battling the forces of age and physics- and each other- to hammer out some sort of an agreement with the opening solo in Rossini's Overture to William Tell. One of the most famous solos in the literature, the cello starts with an e-minor arpeggio, (depicting a sunrise), and is soon joined by 4 more solo celli. But wait, here comes a B-7 arpeggio! All told, there are five arpeggios in the opening Andante. HOW MANY SUNS ARE GOING TO RISE!? WHAT PLANET ARE WE ON?! The last one ends on a note so high that only dogs can hear it. (I asked my dog Lucy if it's in tune, and she held out her paw, so I guess it was good). Directly, the violins start a wavering figure that signals a storm brewing, after which the English Horn plays a most amazing little idyllic solo that I'm pretty sure you will recognize from a Bugs Bunny cartoon. The final “gallop” is famous for being the theme from The Lone Ranger, also known to some East Tennessee children as “the How.” (You know, “Hoooow Silver!!!!)”

Phew. After a visit to Mozart's Piano Concerto #25, (which we will rehearse Tuesday evening with Conrad Tao as soloist), guest maestro James Feddeck will lead us through a performance of the Symphony No. 3 of Felix Mendelssohn (the “Scottish”). My junior year in high school was quite forgettable, especially given that I received a D-minus in the most boring class I have ever taken, 18th-century British literature. The highlight of that course, though, came the day we watched a movie (yes, SUPER 8) about this very symphony. It contained dramatic views of the lochs and verdant moors found in the Scottish countryside, and the turbulent seas surrounding it. Mendelssohn's picturesque music grabbed my attention, and since then I have always looked forward to playing the work.

Here's a look back at early March's doings and goings-on. 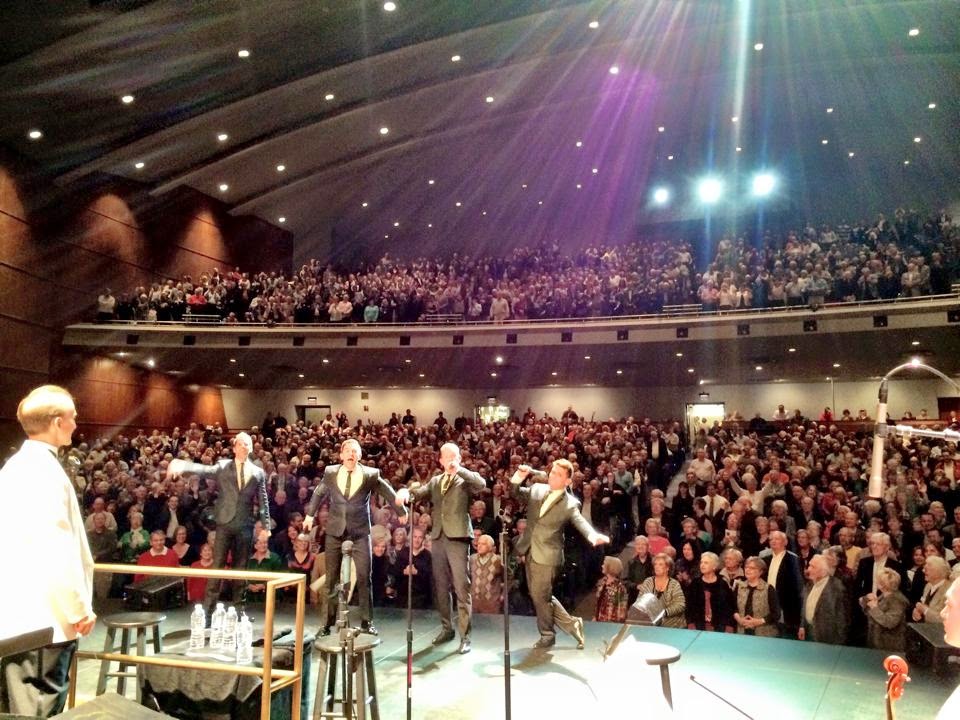 The Midtown Men were a kick! They made the scene and rocked the house this past Saturday night with a "boss" revue of 60's Pop. I sure never thought I would get to play Time of the Season by the Zombies! Here is their "selfie" with the Civic Auditorium audience... 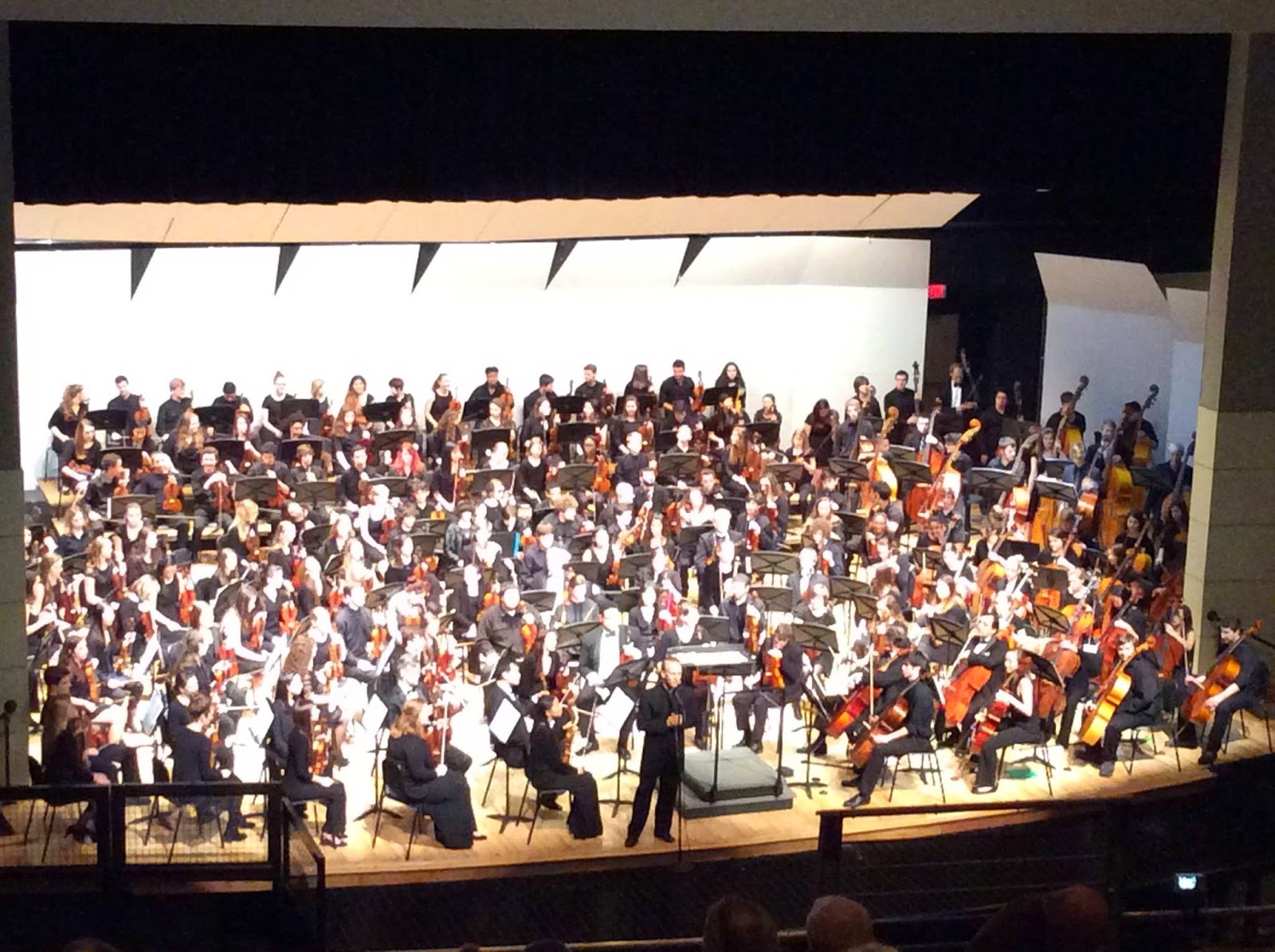 Just a few days earlier, the KSO core strings joined forces with the Oak Ridge High School orchestra in a concert of music by Bach, Mozart, Holst, and Warlock. This shot is of the combined forces, their three ensembles (totaling more than 200 players!) and ours.

Posted by KSO blogger Andy at 12:03 AM No comments:

March is going to feature some old favorites and some new ground. Q Series, Masterworks and especially Pops (with the Midtown Men) are going to be mining the mother lode of our musical memories. At the other end of the month, Knoxville's indefinable avant-garde happening, the Big Ears Festival, will involve a bevy of our players for the first time.

Next in sight is the Jersey Boys cast performing boy-group and vocal ensemble hits from the 60s and 70s. The Turtles, the Zombies, the Mamas and the Papas, and especially the Four Seasons will all be well represented. That's next Saturday at 8 at the Civic Auditorium, aka the “Mike and Gloria Stivik Auditorium." (If you get this reference, then this is just the show for you).

On the 19th and 20th, The Masterworks Series will guest-host a maestro (James Feddeck) and a pianist (Conrad Tao) in a traditional concert of must-see standards. How standard, you say? Try Rossini's Overture to William Tell and Mendelssohn's Scottish Symphony. The cello quintet that opens the Rossini is some of the most sublime music ever, the Mozart Piano Concerto No. 25 refreshingly is NOT one of the “big 3” Mozart concerti, and Mendelssohn gives us his take on the land of Robert Burns, Arthur Conan Doyle, and- these creatures... 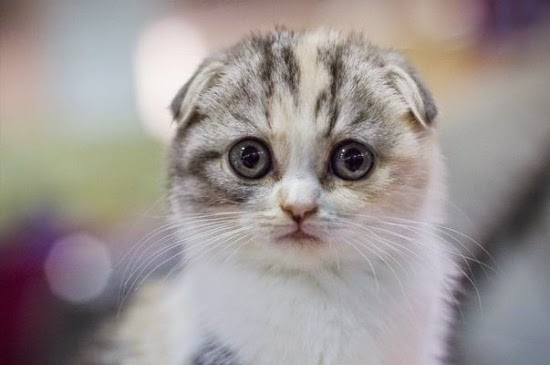 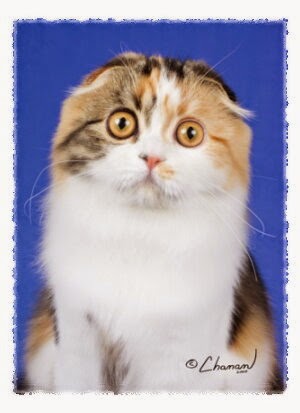 Another old Mendelssohn favorite, one which I have waited 34 years to perform since my first time, (Jimmy Carter was president, good grief!) is his String Quartet, op. 44, No. 1. Again, one of those works that needs a better title than just a bunch of numbers. I bet if I said this is the 450SL, 911S or TR4A of string quartets, you would know what I meant. This work will be among others presented at the Q Series on March 25th at noon at the Square Room on Market Square.


Finally, on the 29th of March, a very interesting re-imagining of Vivaldi's Four Seasons by German Composer Max Richter will happen. This will be a small part of the weekend-long Big Ears Festival that boasts the Kronos Quartet, Laurie Anderson, guitarist Bill Frisell, and composer Terry Riley, among many others, as guests.

As if that wasn't enough, The Principal String Quartet and Principal Flutist Nick Johnson will join harpist Cindy Hicks will perform a recital of music for flute, harp and strings on Thursday, March 12 at 7:30 pm. at First Baptist Church downtown. This is a beautiful venue (as you can see below) for any kind of music, but especially harp music. 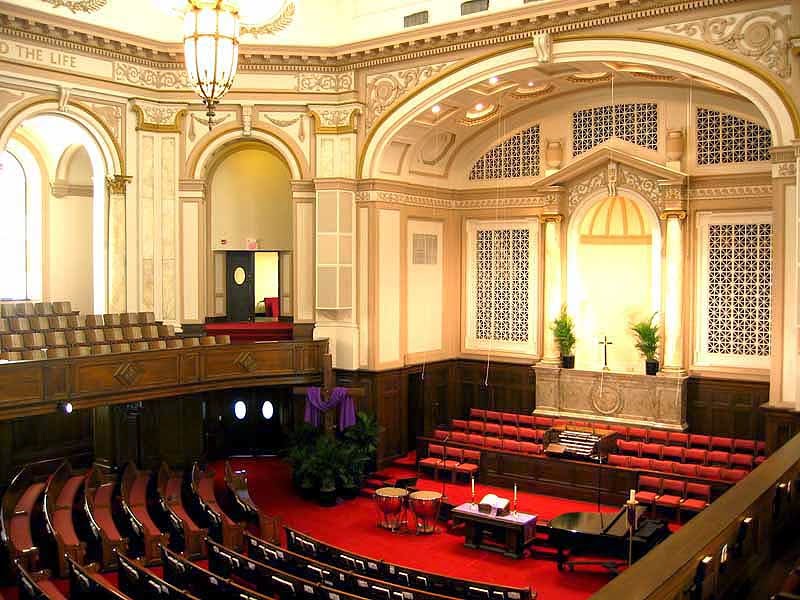 Posted by KSO blogger Andy at 10:11 AM No comments:

Thawing Out at the Bijou

Just in time to welcome the (hopefully less snowy!) month of March, it's Copland's Appalachian Spring with the Knoxville Symphony Chamber Orchestra and the Go! Contemporary Dance Works at the Bijou. We sorely missed performing with them at the Very Young People's Concerts which were canceled last week, but here comes another chance today at 2:30.

I have to eat my words here. Driving home from a Dvorak Bass Quintet rehearsal on Wednesday night, with snow and cars swirling around me, it became clear that the next morning's show was most certainly not going to go on. I THOUGHT THIS WAS THE SOUTH!! Sorry, just venting. I hope everyone got the word about the cancellation, and furthermore, I hope everyone got to make a snow angel! The snow was the show that day.

For the Copland, we will be performing the 13-player version of the Suite, which debuted in 1972. The 1944 original, complete ballet was scored for 13, but the Suite version that everyone knows was only ever scored for a full (or at least chamber) orchestra until '72. It's been interesting to see how the music gets redistributed through the orchestra, for instance, the piano gets a shot at the wicked fast violin and viola scales at the end. They tell me the dancers are wonderful; the costumes alone are breathtaking. What little choreography I can see (when I'm not too concerned with what's on the music stand) is gorgeous.

The first half of the concert will be composed by Grieg, Honegger (pronounced “Own-a-gare”), and Webern (pronounced “VAY-burn”). The Grieg will be an old string orchestra favorite, the Holberg Suite. An early Webern work is also for strings alone, Langsamer Satz. It reminds me of Mahler; I can't think of which symphony, but there is definitely very similar thematic and harmonic allusion. The Principal woodwind Quintet will join the strings for Honneger's work, Pastorale d'été. A mood piece, it's kind of a musical version of Georges Seurat's La Grande Jatte.


Rain is in the forecast and it's probably not a good day for a sortie to “Le Cove de Cade” or other such outdoor destinations, so why not come hear- and see- spring unfold before your very ears and eyes?
Posted by KSO blogger Andy at 2:52 AM No comments: