It might seem ideal, sitting in a beautiful theatre listening to extremely talented musicians play through short excerpts of music written by acknowledged geniuses of classical music composition. But it is a long process that isn't usually entertaining. Just about everyone deserves to be there. I wish for each to do well, even after a disqualifying gaffe renders the remainder of an unfortunate someone's audition moot. I am not so old and entrenched that I can’t remember a time when I was in their position, “sweatin’ to the oldies” in a different sort of way. Occasionally a candidate will appear who is in way over their head and our job is made easy.This is when I am thankful for the renovation of the Tennessee Theatre and gaze up at the ceiling with its big, beautiful, blue and gold omelet made of Fabergé eggs. I am also thankful for the screen that ensures anonymity for candidates and committee members alike.

Eighteen violinists have strutted their stuff on the stage and now it’s time to winnow the field down to a handful. Just about all of the committee is on the same page when it comes to strengths and weaknesses. Three players are deemed to stand head-and-shoulders above the rest, but that is a narrow field from which to choose, so we revisit some of the close calls. After a bit of discussion, the field is upped to five acceptable candidates. In the final round we are rid of the screen and can see what we are hearing. It is valuable to know what these players look like when they play; posture, demeanor and other somewhat intangible factors. Resumés are made available also, to learn of a player’s training and experience. We take note of gaps in employment and amount of experience.

In the end we have chosen three players who are a good fit according to sound, experience and attitude. It is difficult to say no to some who were close but not close enough. That long flight or drive home is somewhat poorly but surely tempered by the fact that merely being a finalist is resumé fodder.

Stay tuned for the official word on the new players.....
Posted by KSO blogger Andy at 12:06 PM No comments:

Another loss that Knoxville’s musical community sustained this past spring was the passing on Feb. 20th of Roger Stephens, the Director of the UT School of Music from 2001-2011. He was a crucial catalyst in the drive to get a new music building at UT, the groundbreaking for which was held on Nov. 9th, 2010. A tribute to Dr. Stephens will be held on September 6 at 7:30 p.m. in the Cox Memorial Auditorium in the Alumni Music Building on campus.

We at the KSO are in the process of finding a new principal French horn, to replace the late Calvin Smith. This process, even more so than other auditions, is a labor of love.

Barry Tuckwell once likened playing the French horn to “driving a sports car very fast down a treacherous mountain road.” After hearing seven hours of horn auditions yesterday, I totally concur- and would have to say that there are some very good drivers out there. It is a versatile instrument that straddles the woodwind and brass families; brassy enough to hold its own with trumpets and trombones, but sensitive enough to blend with clarinets and flutes. As a string player, serving as an “at-large”audition committee member for wind instruments is a learning experience. Sometimes it is obvious what to look for, but a lot of subtleties are lost on me and I defer to the “experts” on such issues as blending ability, tone color shading, attack and breath.

As an ignorant young string player, my early opinion about French horn playing was that good horn playing was the kind you didn’t notice. I have been schooled on this and now know that there is so much more to it than that- especially when there are so many that play at a very high level.

To be continued....
Posted by KSO blogger Andy at 5:26 PM No comments:

A Blog That Got Away

I think she did it just because I accidentally omitted it, but Sarah Chumney Fellenbaum brought to my attention via Facebook one salient blog that should have been included on the August 11 post. It is the "Fellenbaby" blog that Sarah and Resident Conductor James Fellenbaum have launched chronicling their child-raising experiences with little Kiri. This is an up-close look, with a multitude of photos, of their experiences bringing up baby. Both of them are working musicians in this area and each have their plates full of music, Sarah with KnoX Brass WorX and the Knoxville and Oak Ridge Symphonies, and James with the UT Orchestras and of course the KSO. Keep up with them... If you can. 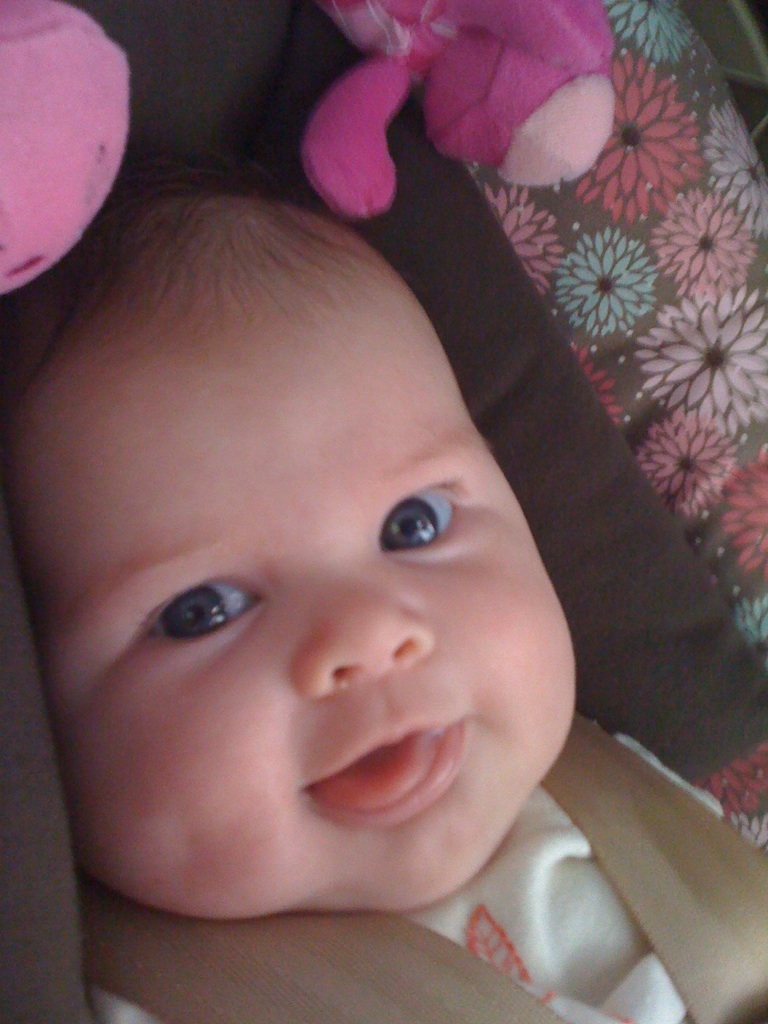 Posted by KSO blogger Andy at 8:52 AM No comments:

Bowings... They’re up, they’re down; they’re slurred, they’re separate; they’re hooked, they’re “as it comes” (AIC). The “paper-pushing” part of my job is upon me, choreographing everything so that all of our section is moving in symmetry (or a reasonable facsimile thereof) with the other string sections of the orchestra. But... they’re here, which means that the 2011-2012 season is right around the corner!

The string principals, Katy Gawne, Edward Pulgar Steve Benne and I, get ahold of copies of parts that have been “bowed” by Gabe Lefkowitz. To the extent that is practical, we mark bowings that follow his lead and cause the sound to be shaped the way it should. There is a lot to consider. Will there be enough bow to get the right volume of sound in a particular phrase? Is everyone in my section capable of doing these bowings, if they are out of the ordinary? Have I put the same bowings at the end of the piece that match the analogous spot earlier in the movement? Does it really matter? (YEEESSSSS)!!!!! Will Katy, Steve and Edward guess the same way when it comes to things we have that Gabe doesn’t, or do we need a Skype date to figure it out?

When I sat in the section (rank-and-file), this wasn’t my responsibility, and I had no control over such matters. I would suggest things, but there’s a fine line between suggesting and pestering. As a section leader I am amenable to suggestions, as my predecessors were. Some changes are inevitable anyway; when we get to the first rehearsal and find that the tempo is much different than we thought, or just plain incorrect in the part, we are thankful that we can tweak things a bit to make our lives easier. By the final rehearsal though, everything needs to be just so for the next night’s show. YouTube videos help, as do memories of previous performances.

The Beethoven Eroica Symphony that anchors this season’s opening concert also opened the 1988-1989 season. Those concerts, some 23 years ago, represent the only KSO concerts that I have had to miss due to an injury, a woodworking mishap that involved stitches on my left hand. Luckily I can spare you the details because it was so long ago that I don’t even remember how it happened. Rest assured... I have no woodworking projects on the docket at this time.
Posted by KSO blogger Andy at 9:03 PM No comments:

Principal Clarinetist Gary Sperl is going to be followable via blog, as he adjourns to Tanzania for the upcoming school year. And... a major congratulations to him for his completion of the Lake Placid Ironman competition!! A little over 15 ½ hours for a 2.4 mile swim, 112 mile bike ride, and a marathon run. Good NIGHT! I’m just happy to be able to take the stairs two at a time any more. (Yes, I know followable is not a word, but I am petitioning to have it coined).

Other planets in the KSO blog solar system are ripping it up, too. Katy Gawne still has wonderful culinary and stitchery blogs, and her husband Tim is feeding Frank Munger’s News-Sentinel Atomic City Underground column with old documents from Back in The Day in Oak Ridge.

Violinist Samuel Thompson is going places; a real “musician of fortune.” I’m not sure but it seems he has been in Italy and maybe England this summer. His older posts are found here.

Clarinetist Erin Bray is a culinary lodestar whose Fear and Bloating in Knoxvegas blog runs the gamut of life with raising kids, caring for parents, making music with your husband and of course, food. I recently was under the spell of a Boston Butt pork roast she conjured up that made me whimper. Y'all should pay attention, now.
Posted by KSO blogger Andy at 2:07 AM No comments:

Ha! The minute I complain about not having enough live music around, an event pops up. On Sunday, August 14 at 3:30, cellist Bartholomew LaFollette and pianist Cathy Whitten will perform music of Bach, Brahms and Liszt at Concord United Methodist Church. Admission, as far as I can tell, is free.
Cellist Bartholomew LaFollette began playing the cello in Philadelphia at age 3, studying with Alicia Randizi-Hooker, who now resides in Knoxville and has played with the KSO. Now at age 27 he has fashioned an impressive career, having toured all over Europe and taught at prestigious venues.
Back in the dark ages (1986) when I was first hired to play with the KSO, one of our duties was to play with the Oak Ridge Symphony. Cathy Whitten was a high school student and played in the cello section of the ORSO, which was then under the direction of Robert Lyall. Years later, she resurfaced as a comrade of our son Thomas at American Guild of Organists’ local chapter events. She is a highly sought-after accompanist in the Nine-counties area.
Posted by KSO blogger Andy at 12:06 PM 1 comment: