Our jam-packed January will end this coming Wednesday with a Q Series program at The Square Room on Market Square at noon. The Principal Woodwind Quintet will be performing Nino Rota's Piccola Offerta Musicale and William Grant Still's Miniatures for woodwind quintet. The Principal String Quartet will close with Franz Schubert's Op. 29 quartet in A Major. 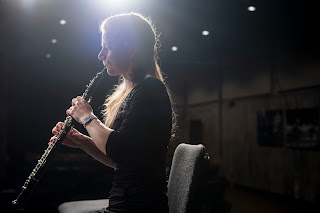 You may not of heard of Nino Rota, but I guarantee you have heard his music. He scored more than 150 films from the '30s to the '70s, including The Godfather and The Godfather Part II, and most of Fellini's films. In light of our recent spate of performances of John Williams movie scores, this performance of Piccola Offerta is a way of acknowledging in a timely way that Williams isn't the only Ferrari in the garage. Fellini himself gushed with praise for Rota's skill, saying:

The most precious collaborator I have ever had, I say it straightaway and don't even have to hesitate, was Nino Rota — between us, immediately, a complete, total, harmony... He had a geometric imagination, a musical approach worthy of celestial spheres. He thus had no need to see images from my movies.


William Grant Still's music has enjoyed an uptick in popularity in recent years, with the KSO playing several of his works in recent seasons, including The American Scene, Afro-American Symphony, and Can'tcha Line 'em. The jazzy, bluesy tinge of his music has been a welcome addition to the rather limited output of George Gershwin in that style. Like Rota, he has had a hand in the film music industry, arranging music for films such as Pennies from Heaven and Lost Horizon. 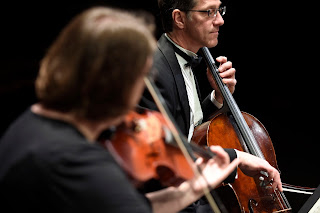 Back in 1797, January 31 was known as “Mrs. Schubert's due date.” So it seems appropriate that we celebrate the birthday of the “King of Song” by performing one of his most beloved string quartets, the Rosamunde. This is a work that is unfairly in the shadow of his Death and the Maiden quartet, perhaps only because it is not as rowdy as DATM. The “Rosamunde” title stems from the theme of the second movement Andante, which is borrowed from his incidental music to Helmina von Chézy's play. I'm going to blurt this right now, a string quartet can not make a more beautiful statement than with this work in general, and this movement in particular. The rhythm of the melody is clearly inspired by the second movement of Beethoven's 7th symphony, with its elegant procession of gently unfolding harmonies. The first three movements are in A minor, but there is very little of the angst associated with a minor key. Just in case, though, Schubert wrote the romp of a finale in A major. The fact that I have not performed this work until now is proof that good things happen in old age!

Hope to see you at this well-balanced program!
Posted by KSO blogger Andy at 7:27 PM No comments:

There was quite a palpable buzz after the inaugural installment of the Harry Potter series movies with live orchestra this past October. (And I'm not talking about those low bassoon notes!) The story of Harry's second year at Hogwarts will be conveyed tomorrow night at 7:30 at the Knoxville Civic Auditorium, with a Sunday matinee at 1:30. Tickets via ticketmaster here.

Nearly as engaging as the Harry Potter series of books is the “rags-to-riches” story of their author, J. K. Rowling. She described her life in the midst of her work on the series to be “as poor as it is possible to be in modern Britain, without being homeless.” The creative process involved is also something to be celebrated. To think that the idea for a series of seven books averaging 585 pages each came fully formed to her while delayed (four hours on a 2-1/2-hour trip!) on a train platform in 1990 is every bit as fantastic as the novels' subject matter. Also notable is the fact that the ending of the entire series was one of the first things she wrote. Whether she knew just how many children she would be motivating to read is unknown, but her taking action on the inspiration and her persistent vision for the project in the face of obvious adversity can be held up as exemplary to young creative types.

John Williams' colorful score propels the movie with motivic content and magical orchestral effects. People that analyze such things have worn out many swivel chairs looking for parallels between Williams' scores and Richard Wagner's output, but the score, as usual, remains a marvel to anyone who appreciates effective use of music in movies.


Accompanying a film requires strict attention to syncing with on-screen action. In typical movie-score fashion, the individual parts are brimming with notes, so I had better get a move on to become familiar with mine. One cannot simply wave a wand at them and hope to assimilate them.

Hope to see you there!
Posted by KSO blogger Andy at 11:31 AM No comments:

This week is already upon us, it seems. After last week's Chamber Classics concert and the Indiana Jones production, there are at least three concerts to look forward to. At the Tennessee Theatre TONIGHT will be the Martin Luther King Jr. Celebration Concert at 6:00 pm. Aaron Staple and alto Doris Talley will grace the stage once again for a stirring offering under the direction of Maestro Demirjian. The Carpetbag Theatre under the direction of Linda Parris-Bailey will perform- Black Atticus and Rhea Sunshine (pictured below) are featured. You may remember Rhea's dynamic poetry at the inaugural KSO Unstaged event at The Standard in November. The concert is free, as is parking at the State Street Parking Garage. So, with an eye to post-concert victuals, take advantage of your free spot (and the early show time) to make it Not Just Another Monday Night. 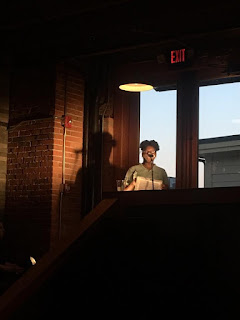 That same parking spot, or one just like it, would serve you well this coming Thursday or Friday when we shall offer a treasure of a symphony, Dvorak's 8th. I don't know where to start to describe the effect of this, the final work by Dvorak to be published before his move to America in 1892. One very important thing to note is that the cellos are heavily featured, bearing as they do the themes of the outer movements. (Not that I'm biased or anything...) Dvorak's musical palette was about to take on American affectations, but this Symphony is ground-breaking even in advance of that. The delicious dissonances that pepper the work are stock-in-trade for present-day pop composers and songwriting teams (cough cough The Beatles). The waltzy third movement is just one big, giant face-melting opportunity; look for two appearances of the “chord of life” just before a fermata in the trio section of that movement. The work as a whole is performed just once for every two or three times that Dvorak's “New World” is played, and in my book, that is just wrong.


Also on the program will be works of Brahms, Smetana, Adam Schoenberg and Queen, in partnership with Project Trio. This ensemble of flute, cello and bass brings a new vitality to the genre of soloing ensembles, and who can resist a work that is entitled Bohemian Rhapsody for Solo Viola and Symphonic Orchestra? Thursday and Friday night's concerts start at 7:30.