It's Quartet time in Tennessee!

It has started. The long-distance run that leads up to the KSO Principal Quartet's November 2 Concert at the Bijou. Our first rehearsal on three new (to us) works. Principal Violist Katie Gawne stated that it is amazing (and a relief!) that in spite of taking the summer, it was easy to slip back into the level and style of quartet playing that we have been tweaking and honing over the last two years. It's easy to play at a high level when there is give-and-take, respect, and care. It's great to be back!

The Beethoven Op. 132 and Shostakovich 8th Quartets are iconic, monumental works that challenge, and ultimately define, an ensemble's sound. Angelica is a classic-to-be written by Venezuelan native Efrain Amaya based on the Legends of Charlemagne. An added challenge is that soon after this repertoire was chosen and programmed, scheduling intricacies dictated that the concert would not be in its usual early April niche, but JUST AFTER HALLOWEEN. This adds up to a prep period that is five months shorter than usual.

The 8th Quartet of Shostakovich was borne on broken wings and broken dreams of freedom, written in three days almost a year to the day before I was born. He had just been diagnosed with ALS, and had recently reluctantly joined the Communist Party. This is a tragic work, there is no doubt, but really, what great Russian works aren't at least half-tragic? Tchaikovsky's 6th Symphony, Boris Godunov, and Prokofiev's Romeo and Juliet Ballet are gut-wrenching all the way, but even the Nutcracker and everything Rachmaninov wrote can bring you tears before leaving you with a smile on your face. Borodin, Tchaikovsky, Rimsky-Korsakov, Mussourgsky, Rachmaninov, Stravinsky, Prokofiev, Shostakovich; the progressive overlap of their lifetimes and musical palettes is startlingly obvious.

Whereas Shostakovich wrote music that is distinctly "Russian," Beethoven did not intentionally write "German Music." We as players and listeners often have trouble separating Beethoven The Man from his country, but to him it was just "music." He ran for the great Germanic relay race team of composers, taking the baton from Mozart and Haydn and handing it off to Brahms while Weber, Mendelssohn, and Schumann cheered them on. Beethoven's early works, informed by his predecessors, respected the templates and forms of the day, but you can tell the music is just bursting at its formal seams, like a chrysalis breeding the Romantic Era. We were always told that Beethoven was half-Classical and half-Romantic; some teachers even had the nerve to call him "transitional." Beethoven was a compositional period unto himself. He was... The Man.
Posted by KSO blogger Andy at 3:45 PM No comments:

The KSO's Pops series for this coming season will be 150% percent bigger than it was last year! Six concerts instead of four, each one at 8:00 pm at the Knoxville Civic Auditorium, and each one spotlighting a wildly different hue in the Pops spectrum. (Note that all are Saturday nights except the October 3 concert, which is a Friday).

Our first touring revue will be bringing some herbs-- Parsley, Sage, Rosemary and Thyme, to be specific. AJ Swearingen and Jonathan Beedle put on an unbelievable show that will leave you Feelin' Groovy. (Interesting that one of the gentlemen is named Beedle; I'd always thought of Simon and Garfunkel as “America's Beatles”). So c'mon and take that Big Bright Green Pleasure Machine across the Bridge Over Troubled Water to the Civic Auditorium on FRIDAY, October 3, before she says Bye Bye, Love!

From the sublime to the... What's Up, Pops?! Bugs Bunny cartoons with a live orchestra? Sufferin' Succotash! I've heard that music a lot. I have kids and I WAS one; really still am one, as you can plainly see. It sounds really difficult, wish us luck! Anyone who ever was a kid should come to the Civic on Saturday, January 17, and get ready to see some new 3D short films of Tweety Bird and Wiley Coyote!

Broadway artists Melissa Errico and Stephen Buntrock will share romantic music from stage and screen on February 7. Les Mis, Phantom, West Side Story, you know you want it. You fellers out there, if you really love your girl, Wouldn't it Be Loverly to do something special like this for her a FULL WEEK before Valentine's Day? (And more than just chocolates from Walgreen's on the actual holiday, one would hope).

You've seen them on the Tonight Show, Letterman, and Dick Clark's Rockin' New Year's Eve, or maybe you were fortunate enough to catch the Broadway show The Jersey Boys. The Midtown Men will be Workin' Their Way Back to the “boy groups” of the 60's and 70's on March 14. The Beach Boys, The Beatles, The Rascals, and of course Franki Valli and the Four Seasons will all be heard-- there's a mother lode of material there and it will be just the right Time of the Season to hear it all again.

I knew it would happen some day, and on April 11 it shall: a chance to play the music of Queen. Rock n' Roll for sure, but WAAAAAAYY more than three chords. Windborne's Music of Queen will Rock You!! I'm at a loss for song titles in this segment because, well, y'know... My favorite Queen songs are Bicycle Race, Party, Killer Queen, and Tie your Mother Down, to give you an idea of what to expect. Bohemian Rhapsody and I go all the way back to it's release in April of 1976, my freshman year in high school. My parents and I had gone to the Outer Banks for April vacation; it was in the upper 90's for 4 days straight, all the way up into Northern New England. I was on a towel with a transistor radio, waiting impatiently for WNBC to play it. The hottest ever Boston Marathon, called “The Run for the Hoses,” began at noon on APRIL 19, 1976 when the temperature was 100 degrees. That's hot.

Elvis Presley recorded hundreds of songs. There's no telling what Terry Mike Jeffrey will pull out of his Blue Suede Shoes on May 9, and That's All Right! By the time I was listening to pop music, Elvis was into things like Suspicious Minds, Burnin' Love, and Kentucky Rain. I kindly missed the boat on all of the earlier Elvis hubbub, I'm sort of a latent baby boomer. But I'm sure Love Me Tender was a slow dance at the prom for some of you...

Talk about something for everyone!

Posted by KSO blogger Andy at 2:26 AM No comments:

Ivory in the Balance

A recent federal administrative action that has affected string players and string instrument collectors is the “Ivory Ban,” an effort by the US Fish and Wildlife Service to strengthen the Endangered Species Act by restricting and regulating border crossings of items containing ivory. The ultimate purpose of this effort, enacted in February and “soft-pedalled” in May, is to increase the crackdown on poaching of elephants in Africa and Asia. That, in and of itself is a righteous goal, but...

I don't usually have a political bee in my bonnet, and this is perhaps an unusual forum for such a topic, but already this edict has proven troublesome to touring orchestras and international artists entering the US. Already some unsuspecting string players have had bows confiscated (and, I assume, destroyed) by TSA agents because of a nickle-sized piece of ivory in the tips of their bows. This has been the preferred material for protecting the end of the bow stick for centuries, although more recent bow makers have switched to different materials since 1976. Occasionally there may also be ivory in the frog of the bow, or in the pegs of the instrument. Only ivory installed before February 26, 1976 is permitted to enter, and then only with valid CITES (Convention on International Trade in Endangered Species) documentation. (February 26, 1976 is the date on which African elephants were placed on the endangered species list).

The CITES documentation is predictably complicated at seven pages long. The fact is that the majority of people can't tell real ivory from synthetic, let alone legal ivory from illegal. Hundreds of bows (which hardly ever have a date stamped on them) change owners daily, mostly without any papers, and if you ask any party involved in those exchanges, they would more than likely be unaware of the ivory content. You try out a bow, and if it feels right and does the things you want it to do, (and you can afford it), you buy it, whether it has papers or not. High-end bows ($30-50,000) are affected by this because replacing their ivory invalidates their authenticity and endangers their integrity. To be sure, we are not talking about factory-made equipment that comes with an owner's manual and a bar code.


String players are just one demographic who are affected by this ban. While it is doubtful they would show up at the gate, countless old pianos are out there with ivory keys-- including one in the White House, I have heard. Sax and trumpet keys may have ivory caps. Cue balls for billiard sets, pistol handles, to say nothing of primitive art and jewelry. I do truly care about the plight of the elephants. It's just that I am skeptical that criminalizing musicians (and others) and placing their equipment at the mercy and whim of some airport employee is going to do anything to stop even one poacher from acting-- or bring dead elephants back to life.

I have included a list of links for further information, as the matter is so complicated that I can only scratch the surface of what is going on with this issue here.

The website www.violinist.com offers some general tips for travelling with instruments here .

This League of American Orchestras posting offers some more specific tips and links to the numerous websites that hone in on how to at least try to stay within the law.

The US Fish and Wildlife Service gives us here an overview of what can and cannot be done with ivory.

Here is the USFWS's guide to travelling internationally with a musical instrument, expanding its scope to endangered plant life such as pernambuco wood, from which the finest bows tend to be made. Good luck.

Here is an article from Time with links about the "soft-pedalling" of the original act.

Posted by KSO blogger Andy at 6:59 PM No comments:

It's time to talk about our new Q-Series! Five Wednesday noons at the Square Room, starting September 24. Tickets will go on sale August 18th at $15.00 apiece. Any remaining tickets will be $20.00 the day of the show, so act quickly to take advantage of this great package deal! Your ticket includes a boxed lunch supplied by Cafe 4, one of downtown's classiest lunch spots. The soundtrack to your lunch hour will be provided by the KSO's Principal Woodwind Quintet and/or Principal String Quartet (repertoire TBA).

Our violist and violinist husband-and-wife team, Louis Diez and Anileys Bermudez, are proud parents of Thomas Rafael Diez, born Monday, August 4 at 6:01 p.m.! Congratulations to them, and welcome, Thomas, to the One Big Happy Family that is the KSO! 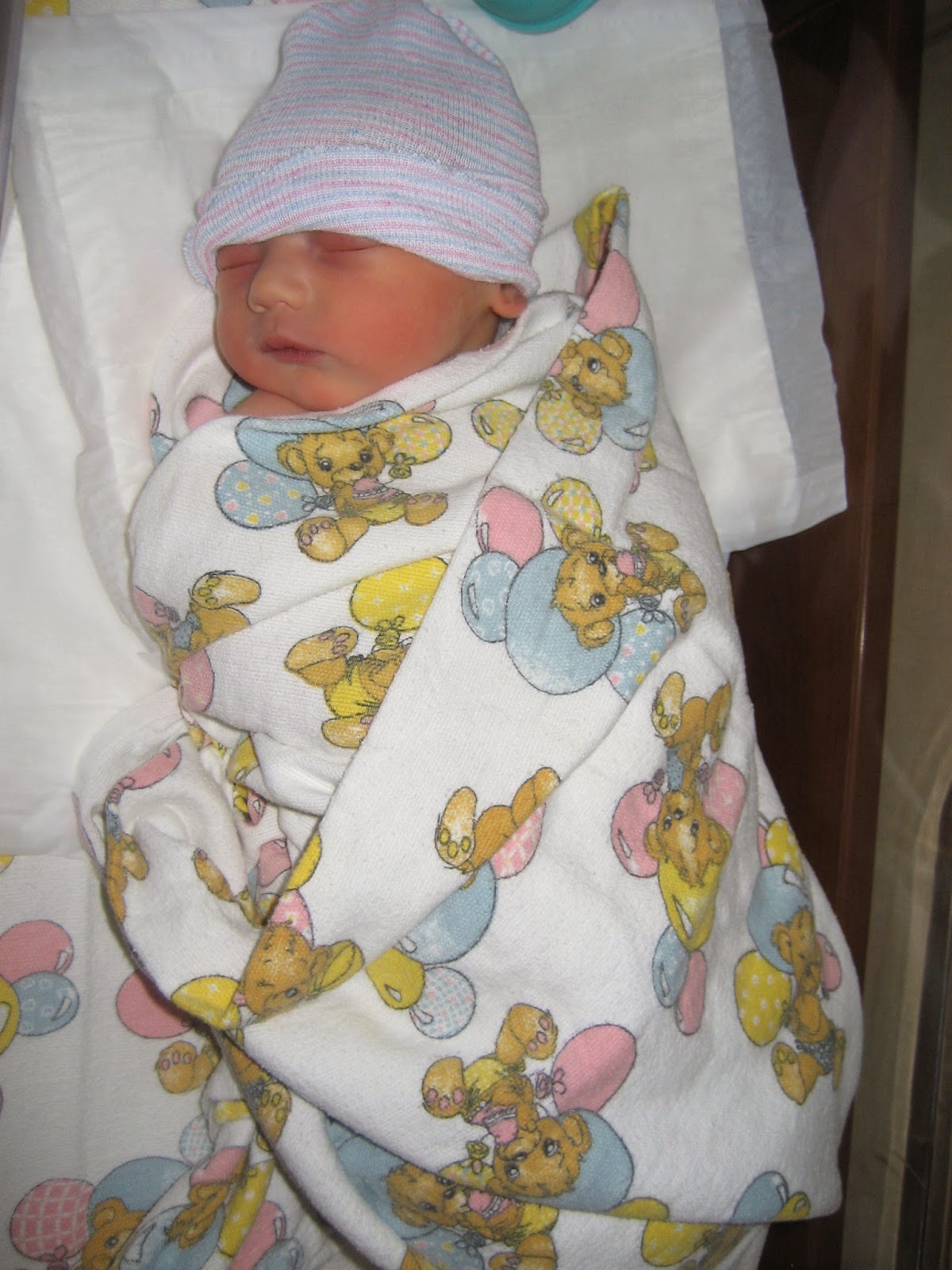 
I couldn't pass up this meme which showed up on my Facebook feed, it is sort of nerdy, but at the same time, enlightening. Composers' penmanship is an interesting study. Some are painstakingly clear in spite of their famously abundant output, (Bach, Mendelssohn), while Beethoven's handwriting so messy it's a wonder anything can be determined from the manuscript. Here is a sampling of Treble Clefs from ten legendary composers. Top row: Bach, Haydn Mozart, Beethoven, Schubert. Bottom row: Mendelssohn, Schumann, Brahms, Debussy, Ravel. 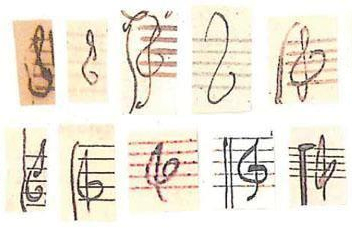 Posted by KSO blogger Andy at 6:55 PM No comments: