The Children's Festival of Reading is taking place this Saturday in World's Fair Park to kick off the Knox County Library's summer reading program. There will be all sorts of activities for children and their parents including a petting zoo, hayride, and a mad scientist. A string quartet from the Knoxville Symphony will also be presenting a story time. I have attended KSO story time performances with my preschooler and they are always entertaining. The quartet and soprano Jennifer Barnett (who also happens to be the symphony's director of community outreach) present several stories with a musical theme. The quartet provides sound effects to go along with the storyline and also plays a short piece or two. There are usually opportunities for kids to participate by playing instruments like egg shakers, tambourines, triangles, etc. The Festival of Reading is free and takes place from 10am to 3pm at World's Fair Park this Saturday. The KSO story time will take place from from 11:45 to 12:30.

Also, don't forget that time is running out to order your tickets to the Cades Cove concert. The deadline for ordering a parking pass is next Wednesday, June 3rd.
Posted by KSO blogger Andy at 9:51 AM No comments:

Happy Memorial Day! For those who would like to go beyond Taps to honor our fallen soldiers, here are some pieces that are suitable for the day. Not all were specifically written in response to war or loss, but all evoke emotion appropriate to the gravity of the day.

Symphony #3 by Beethoven
Missa Solemnis by Beethoven
Symphony #9 by Beethoven
1812 Overture by Tchaikovsky
Mass in the Time of War by Haydn
Adagio for Strings by Barber
Lament by Frank Bridge (I know this was written in memory of the German bombing of the Lusitania, a luxury ship, but the piece is so haunting I had to include it here.)
Symphony #7 by Shostakovich
Lincoln Portrait by Copland
Symphony for the Sons of Nam by James "Kimo" Williams

The results are in and the winner of the opera twitter contest is Stephen Llewellyn, a former barrister who is now the blogger for the Portland Opera. His winning entry tweeted Wagner's Ring Cycle: “There was a young lady called Fricka Who... who... *snore* 'Wake up-- its over.' It's good, I just wish it were quicka.”

Many opera companies ponied up prizes for this contest, which had over 500 entries. Llewellyn chose a generous prize offered by the Washington National Opera which included tickets to the final performance of the season as well as to the annual opera ball.

Then he gave it all away.

He felt that he has plenty of opportunities to enjoy opera and decided to give the package to someone who might not be able to attend as often. He decided to give the prize to a music teacher as a way of thanking them for exposing children to the arts. With some help, he chose Priscilla Barrow who has been teaching music in the D.C. Schools for 22 years. She is passionate about teaching and every year goes out of her way to immerse her students in the arts, often seeking out partnerships with area arts organizations.

Llewellyn found a donor to take care of incidental expenses and arranged for the Washington Opera's costume department to provide a ball gown, so Barrow will truly have a Cinderella experience. I hope she has a fabulous time.
Posted by KSO blogger Andy at 9:19 AM No comments:

The end of the season is always bittersweet. I enjoy my job and I get along with my colleagues so the idea of not having regular rehearsals makes me a little bit sad. At the same time, we are all exhausted and definitely in need of a break.

So what do the KSO musicians do during the off-season? Some people go to music festivals around the country, some stay close to home practicing, teaching and playing recitals, and some take a break from music altogether. Our orchestra is comprised of both full-time salaried players and musicians who are paid per-service. Many of the per-service musicians have jobs outside the KSO which continue through the summer.

This summer I plan to take a bit of a break from the viola and dust off my violin. Before I moved to Knoxville I split my time pretty evenly between the two instruments. Now summer is the only time I have to really focus on the violin. I like to switch in the summer primarily because it gives me a break physically without having to put the instrument down completely. The violin is smaller and lighter than the viola, the notes are closer together and you don't have to work as hard to get a good sound. The body of repertoire for the violin is a lot bigger as well. Beethoven wrote 10 sonatas for the violin, 0 for the viola. Mozart wrote over a dozen sonatas for the violin, 0 for the viola. Brahms, Tchaikovsky, Sibelius, and Dvorak all wrote concertos for violin (and not for the viola). There are certainly great pieces for the viola (Bartok Concerto, Schubert Arpeggione Sonata, two Brahms Sonatas, etc), there is just more to choose from in violin land.

I will also be blogging here all summer, so be sure to check back every Monday and Thursday!
Posted by KSO blogger Andy at 9:17 AM No comments:

Pics from the Stage

Tonight is the KSO's final concert of the regular season. (We still have the Cades Cove and July 4th concerts coming up this summer.) Last night I took some pics to share here. 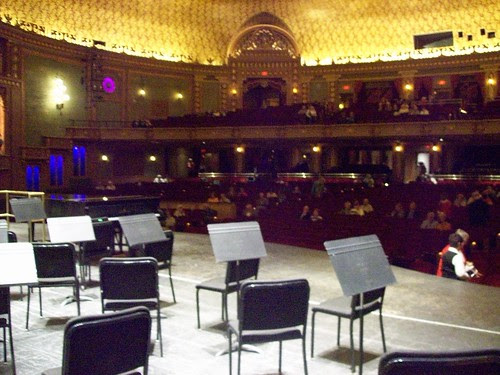 The view from the stage before the concert. 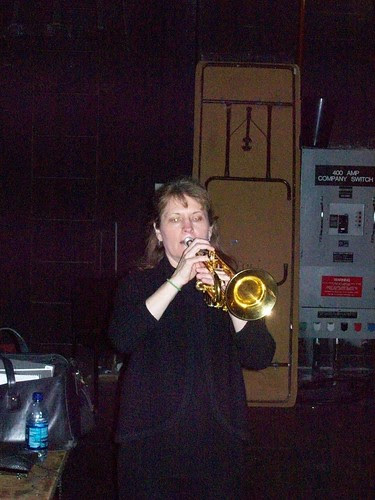 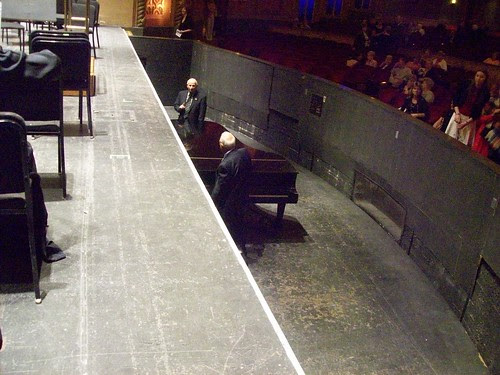 Putting the piano away at intermission. This is still my favorite thing about the Tennessee Theater renovation. So neat!

The end of the season has taken it's toll on a few musicians. Assistant principal violist (and my stand partner) Eunsoon Corliss is nursing an injury and couldn't play with us this week, but she came to listen last night. Here we are at intermission. 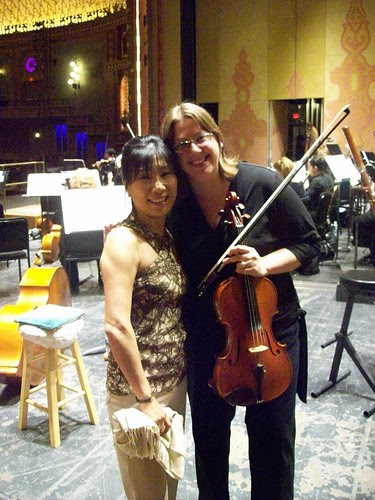 One of these things is not like the others, one of these things doesn't belong... Just kidding, Jim! Jim Fellenbaum is more often seen on the podium as KSO's resident conductor. This week he was gracious enough to jump into the cello section at the last minute. 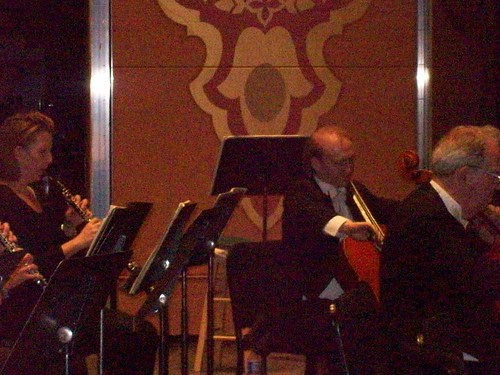 This is the marking we have at the top of the last page of the Mahler. (Yup, the viola part is 39 pages long.) I can't think of anything more appropriate for the end of the season than "Music of General Happiness." It has been a great season, and I'm looking forward to '09 -'10! 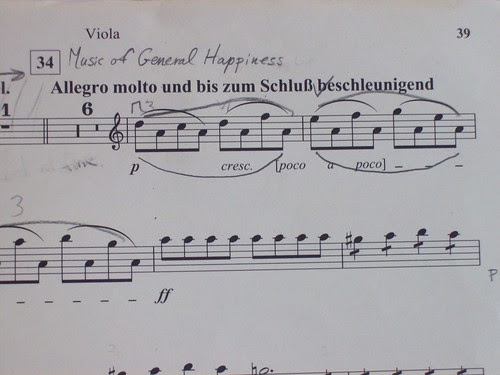 Posted by KSO blogger Andy at 2:23 PM No comments:

The Knoxville Symphony is now twittering away. You can catch all the latest happenings with the KSO at the KSO twitter page.
Posted by KSO blogger Andy at 8:00 AM No comments:

Thank You Very Much, Indeed

This morning I am serving on the committee that will decide who the KSO's next principal 2nd violinist will be. (Nobody is leaving at the end of this season. Due to a musician returning after a leave of absence and the late resignation of our former principal second violinist, we're faced with shaking things up in the violin sections somewhat.) The road to landing a job with a symphony orchestra is a process unlike that in any other profession, and, in my opinion, has little to do with skills needed for the actual job.

At an audition, musicians generally draw lots to determine the order in which they will play. The committee hears candidates in rounds, listening to everyone in the first round and then eliminating more and more people in subsequent rounds until a winner is chosen. In early rounds great lengths are taken to make sure the identity of the candidates is kept anonymous. The committee sits behind a screen so that the musicians can be heard but the committee cannot see who is playing. If the musician has a question they ask the proctor who relays the information to the committee. In many orchestras candidates are disqualified for speaking directly to the committee or even coughing excessively during the screened rounds. Some orchestras even lay a carpet down so that it isn't possible for the committee to identify a man from a woman based on footsteps.

Why all the trouble? A few reasons. For a long time orchestras were made up entirely of white men. That era has passed, especially in the U.S., but the screen does help to eliminate any other bias that might pop up. The classical music world is a small one. The screen polices committee members from passing their friends on to future rounds or holding back people they don't like from advancing. It also serves as a privacy fence for candidates who may not wish to advertise they are shopping for a different job or who have a bad day and botch the audition. In the final round the screen comes down, we are allowed to speak with the finalists, and can see their resumes.

When the votes are in and the winner has been picked we have listened to the winning candidate play for a total of 20 to 30 minutes over the course of a day or two. The winner is the musician who managed to play the most perfectly that day. Sometimes they happen to be the best musician present at the audition and sometimes they aren't. Most of the time we get lucky and they fit nicely within the section but sometimes they don't.

My biggest beef with the audition process is that it doesn't test how someone will do in the thick of the orchestra. Sure they can play Don Juan perfectly, but how do they do in the section? Can they blend? Are they prepared for rehearsal? Are they easy to get along with? How do they react to correction? Conversely, I fear that many players who would be great assets to any orchestra are eliminated far too easily because they simply do not audition well. Auditioning is a skill in itself that is very much separate from being able to fit into an orchestra. Some orchestras invite a few finalists to spend a week in residence rehearsing and performing, before making their final decision. This is helpful, but also quite expensive for the orchestra and it doesn't help the musicians who are eliminated early in the process.

The audition process as I described it is industry-wide and I don't see it changing any time soon. For now I'm just happy to be on the listening side of the screen.
Posted by KSO blogger Andy at 12:38 AM No comments:

The Knoxville Symphony has several concerts coming up this week, including two free concerts.

Tonight at 7:00 the Knoxville Symphony Youth Orchestra will perform their final concert of the season at the Tennessee Theater. Several orchestras of all levels will perform from kids who have only been playing a few years to high school students who have been seriously studying their instruments for many years. All the ensembles present a polished performance. This concert is free.

Wednesday at 6:30 we will be playing on Market Square. This concert was rescheduled from last Friday due to rain. This concert is free.

Finally, on Saturday Peter Cetera is coming for the KSO's final pops concert of the season. This is the concert I'm looking forward to the most this week. Peter Cetera has written hit after hit after hit. It should be a great evening.

Posted by KSO blogger Andy at 8:59 AM No comments: