The End of an Era

Hello!  Yes, it has been a while, and what a while it has been!  The close of Maestro Richman's tenure was fulfilling and fun.  The audiences for last Thursday and Friday's Masterworks concerts stood immediately upon his entrance in a very heartfelt and deserved tribute.  Concertmaster Gabriel Lefkowitz's performance of the Tchaikovsky Concerto rivaled any I had witnessed, and the orchestra as a unit shone throughout the Mahler and Ravel which wrapped things up.

I can't imagine any new Music Director coming to Knoxville and facing the culture shock that our city must surely present. One telling instance was at an early September outdoor concert, where he announced the artist for the Opening Gala concert.  “Martin Short!” he said, and there. was. nothing. in response from the audience.  It was still relatively soon after 9/11, and the orchestra had been having some deficits.  The idea that a Music Director whose experience was rooted on the West Coast, as opposed to Western Europe (to which the orchestra had for the previous three decades become accustomed) represented a major change of direction for the organization, and particularly the board.  In no time at all, though, Lucas drew a bead on the town.  His focus on American music and his awareness of diverse repertoire earned him the respect of both younger and older audiences. His seamless assimilation into and continuation of the tradition of the Clayton Holiday Concerts was impressive.  It must be said that compared to the town to which Lucas came in 2003, Knoxville is now culturally head and shoulders taller, and some of this is his doing.  The orchestra is deeper, more visible and more efficient.


Most importantly, though, the celebrations and parties really hit their marks! Lol. The first fete was on April 30th at the Emporium Building on Gay St., downstairs from the KSO offices.  County Mayor Tim Burchett made a proclamation and awarded the Maestro permanent citizenship in Knoxville, as well as the rank of “Colonel.”  In addition, after the Friday night Masterworks concert, Club LeConte was opened up to the players and other guests for one final goodbye gala.

Some fun photo ops came along at both events, enjoy! 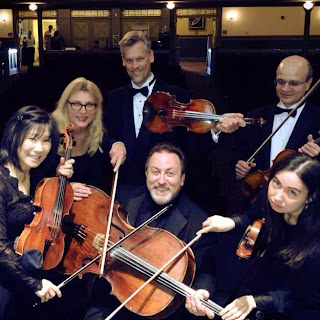 A major jewel in the crown of Maestro Richman's tenure was the Music and Wellness Program. Here is Lucas, with (from the left) violist Eunsoon Corliss, cellist Stacy Miller, violinists Sean Claire, Ilia Steinschneider and Sara Matayoshi. 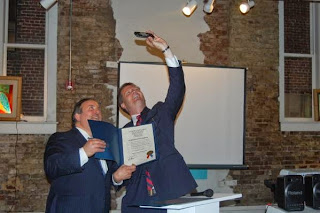 Here is County Mayor Tim Burchett in a selfie-op with the Maestro, proclamation in hand. 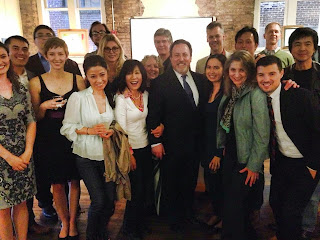 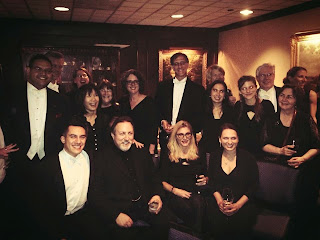 Posted by KSO blogger Andy at 11:52 PM No comments:

Has it really been twelve seasons? The Knoxville Symphony under maestro Lucas Richman has been going on fast forward for many years now. It has found its way into the ears and hearts of people from many new realms locally and regionally, while still holding the interest of long-time supporters. Keeping an orchestra of our size afloat in post-9/11 America has proven treacherous for many sister organizations, but Lucas has worked in concert with at least three different Executive Directors to keep our ship aright, and for the last seven years, in the black. The Music and Wellness Program, the Very Young People's Concerts (featuring THE ONE-AND-ONLY PICARDY PENGUIN!!!) the Q Series, Story Time Concerts and other initiatives have all given the KSO a lot of cred. Both downtown Knoxville and the KSO have seen wholesale changes for the better in the last ten years or so that have created an even more liveable and vibrant city. Knoxville is no longer a stopover on the way to Asheville, Gatlinburg, or Chattanooga, as it was when I moved here in '86; it is a destination.

So with all the new points on the compass that the orchestra touches now, it sometimes gets overlooked how the orchestra has also improved its overall sound, through both the crafting of that sound, and the attracting- and retaining- of quality players. The music that Lucas has chosen for his farewell concert spotlights the versatility that the orchestra has come into. Three of the greatest symphonists ( Beethoven, Tchaikovsky, and Mahler) and the greatest orchestrator (Ravel) will be uniquely brought together, this Thursday and Friday at 7:30 at the Tennessee Theatre.

Beethoven's overture to Goethe's play Egmont has three parts: a slow introduction which morphs into a tension-filled Allegro in f minor. Release comes with the Allegro con brio coda in f major, in some of Beethoven's most triumphant, pedal-to-the-metal writing. The stage is then set for concertmaster Gabe Lefkowitz's solo appearance on the Tchaikovsky Violin Concerto. This work is famous for fooling listeners into applauding at the end of the first movement., which truly sounds like the end of something, but hang on... there are two more movements. The second movement Canzonetta is serene and contemplative, but is interrupted by the Allegro vivacissimo finale bursting through the door. I guarantee some audience members will literally jump out of their seats at the sound of the finale's downbeat.

The presence of the Egmont Overture and the Tchaikovsky concerto might make you think this will be a typical overture/concerto/symphony program, but that mold is long broke. On the second half of the program, contrasting moods continue to be order of the day, with the Adagio from Mahler's Symphony No. 10 (the only movement of that work completed by the composer), and Ravel's tone poem La Valse will be paired in a sort of Viennese synopsis. Ravel's work comments on the fall of the Austro-Hungarian Empire by deconstructing that empire's dance-of-choice, the Waltz, whereas the Mahler is a snapshot of the transition from the First to the Second Viennese School of composition.
Posted by KSO blogger Andy at 11:26 AM No comments:

It must be May, because music is flying at me and out of me in all directions. Between last Sunday (Il trovatore) and this coming Sunday's Chamber Orchestra concert, I will have had six completely different performances of various genres. I am happy just to have brought the right music, the right instrument, and the right attire. Next week is much easier, only three different performances...

And now more about that Knoxville Symphony Chamber Orchestra concert, 2:30 Sunday at the Bijou. Maestro Lucas Richman's Bijou Theatre farewell will be a concert of masterpieces from the chamber orchestra and wind band literature; Richard Strauss' Serenade in E-flat for 13 Winds, William Schuman's Symphony for Strings, and Brahms' Serenade No. 1 in D. On the surface the program appears to be all-German, but remember this is mid-20th-century American composer William Schuman, with one “N”, not Robert with two.

The Strauss Serenade holds a special place in my heart, because I don't have to play it! But seriously, if you take Mozart's Wind Serenades and kind of give them a small dose of complexity, you'll have an idea of what to expect here. It's an early work, nestled between the Cello Sonata and the momentous First Horn Concerto. It's always a rare treat to LISTEN to a piece of music at work, and our winds ROCK!

Next comes the William Schuman. Although his music has been more in the mainstream in the past, it has for some sad reason become less frequently heard. Known for his orchestration of Ives' Variations on “America” for organ, his Credendum: Article of Faith was performed here under Kirk Trevor in October of 1992, oddly enough coupled with ROBERT Schumann's 2nd Symphony. Wow, tough night for the violins. ANYway, the striking harmonies and excitable rhythms of this String Symphony should wipe away any doubt of Schuman's presence in the upper echelon of 20th-century American composers.


Brahms' op. 11 Serenade (like the Strauss, a youthful work) which closes the concert, is pure bliss. A symphony in all but its title, you can literally hear him develop as the work progresses. The first Scherzo forecasts the theme of his 2nd Piano Concerto's Scherzo in an eery way, but all six movements are drop-dead gorgeous and iconic. I played this work before I played any of the Brahms symphonies, heck, I thought they were all this good! Fusing together the separated camps of woodwinds and strings that performed on the first half of the concert is an ingenious programming touch that is typical of the classy details for which Maestro Richman will be missed. We hope YOU are not missed on Sunday afternoon, come on out!
Posted by KSO blogger Andy at 1:50 AM No comments: