I have been thinking quite a bit about a recently deceased former member of the KSO, bassist Dale Watermulder. His death on May 8 cast a shadow on those who knew him, and the May performances that followed were tinged by that shadow.

Dale came to Knoxville from Michigan in 1977 and started his library career at the Fountain City branch, moving to the Lawson McGhee (downtown branch) in the early 80's. He was the force behind the establishment of that branch’s awesome Sights and Sounds (A/V) collection, which has been a valuable reference over the years for many musical endeavors of my colleagues and  I. He was always curious about my summer opera festival playing, and had a lot to say about even the most obscure works that I performed at Lake George and Des Moines Metro Opera.

We were both principal string players in the Oak Ridge Symphony for a time, roughly 1994-2000. As a fellow diabetic, we had many stories to swap. I always felt I had learned something after a conversation with Dale, but subtly so; the wisdom of his words took a little while to sink in. He cared deeply about the things he did and believed in doing them well.

Thank you, Dale, for making Knoxville a more cultured place– one dvd, one cd, one bassline at a time. 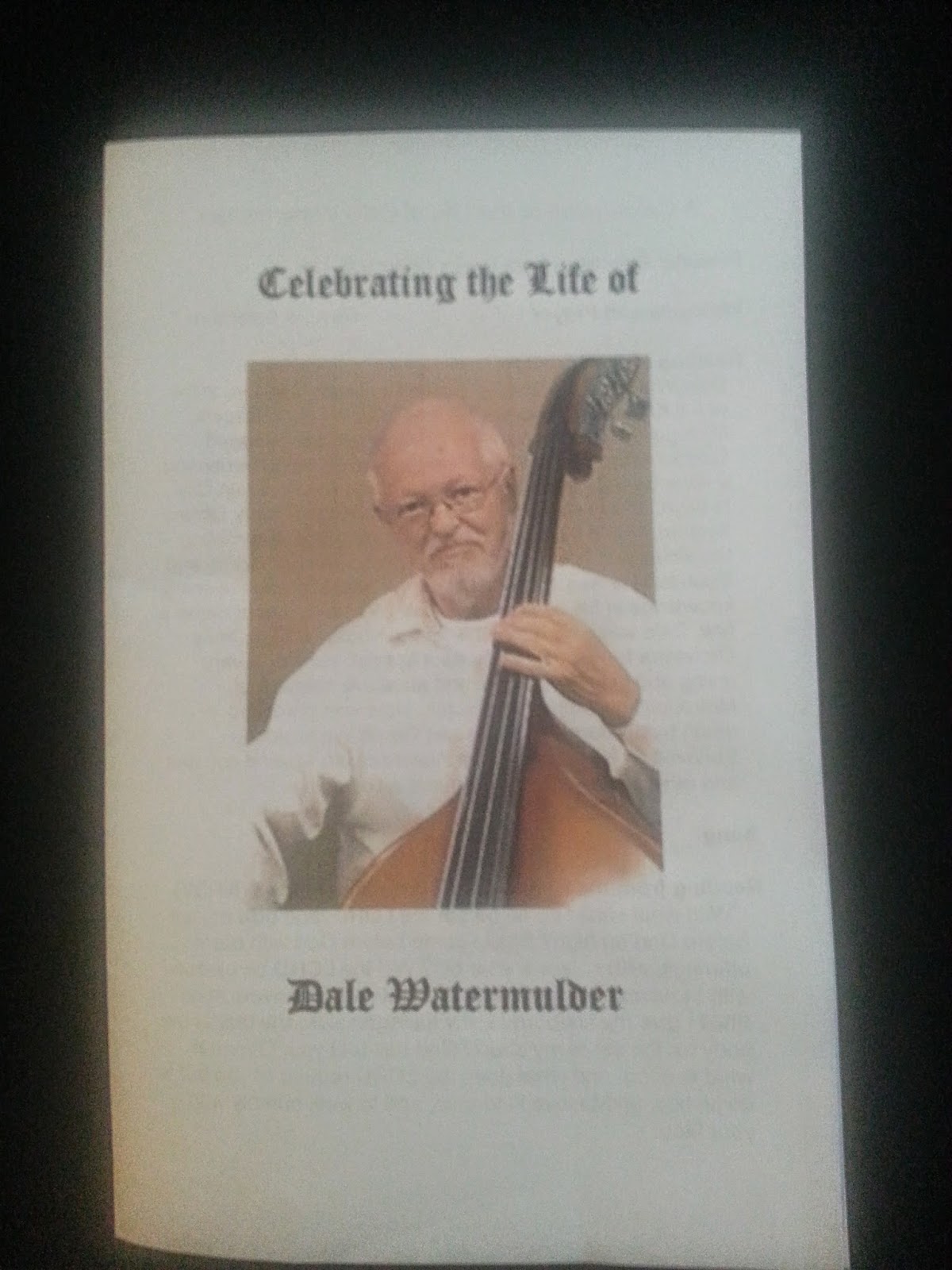 Posted by KSO blogger Andy at 11:57 AM No comments:

The votes are in (after a nowhere-near-scientific poll) and the winner in the category of “favorite concert of the year” is the Shostakovich 10/Beethoven 4th Piano Concerto production from last week. Having mentioned in the last post that it was MY favorite concert had no influence on the “poll’s” results. The works just grew and grew on the players, and by the dress rehearsal the enthusiasm was tangible. These two familiar (but not overworked) classics showed off the orchestra’s strengths well and proved to be a great bonding experience for the players.

There are two events left in the KSO’s 78th season. The Principal String Quartet will be featured in a special event Wednesday at the Blackhorse Pub and Brewery, in Western Plaza at 4429 Kingston Pike. Already an awesome after-work venue, the Blackhorse’s ambiance will be further enhanced by the quartet starting at 5:30. The topic: beer and heavy hors-d’oeuvres. The special guest: Beethoven. Or is it the other way around? Anyway, nobody wrote string quartets like Beethoven, and we will throw in some tangos and such to mix it up. The success of “Scotch and Strings” at Boyd’s Jig and Reel (in spite of the yicky January weather) has spurred the KSO on to add another social event, “Beer and Beethoven.” Assuming that this, too is successful, I wonder what next season’s offerings will be in the “This and That” series: “Merlot and Mozart?” “Chardonnay and Chabrier??” “Sake and Satie???”

The next day, Thursday the 22nd, the Chamber Orchestra will travel to Maryville’s Theatre in the Park, across from the Blount County Courthouse for a FREE 7:30 concert that is a repeat of our May 1 Concert in the Square (which wasn’t really in The Square) and will reprise for the final time concertmaster Gabe Lefkowitz’s performance of Sarasate’s Zigeunerweisen. An easy way to distinguish these last two concerts is to think hefeweizen on Wednesday, and Zigeunerweisen on Thursday. A rain date of Sunday evening is in force.
Posted by KSO blogger Andy at 9:38 AM No comments:

We have been visiting the mind and heart of Beethoven and Shostakovich these days, and they have been gracious hosts. Our accommodations feature transcendent sonic luxury in the form of a gem from Beethoven’s succulent Middle Period (Piano Concerto No.4), and Shostakovich’s luscious 10th Symphony. I dare say that these are works that I haven’t performed frequently but I’m sort of glad I haven’t, because it makes their re-acquaintance all the finer. Despite the fact that both of these works are identified only by their numbers (pretty much the most famous “4th concerto” & “10th symphony” in the standard rep.), they are must-hear works that help earn both composers the of title of tunesmith.

Beethoven really broke some rules with the 4th concerto. Most, if not every concerto written up til then had a big ol’ orchestral introduction (tutti). The 4th starts with a quiet solo piano chord. And then a few more. It’s unassuming and seductive, but when the strings come in a few bars later, you realize that hey, this is not your father’s piano concerto. From this point on in the compositional timetable, orchestral tuttis became optional, or at least held to a few bars. Like the Shostakovich that follows on the second half, this first movement creates structural suspense that is just riveting. The second movement Andante con moto is beyond words beautiful and profound with just strings and piano, and the final Rondo: Vivace is a race to the finish. Just take a look at the chronology in the environs of this work in Beethoven’s output:

Op.55- Eroica Symphony
Op. 56 Triple Concerto for Violin, cello and piano; we played this with the Eroica Trio in September here. It seems like years ago now.
Op. 57 Piano Sonata, Appassionata
Op. 58 THIS PIECE
Op. 59 not one but Three Razumovsky Quartets, holy horseshoe, Batman!
Op. 60 Symphony. No. 4
Op. 61 Violin Concerto

Shostakovich’s tenth symphony is the best piece composed in 1951, and my favorite symphony of his to play. Biographical leitmotifs serve as bricks in a musical wall, which is finally busted  through in the last movement. The second movement is a renowned musical portrait of Stalin– a giant orchestral machine in overdrive. The famous “three knocks” rhythmic motif is used quite a bit in the third movement. Shostakovich’s writing for all the winds, but especially the bassoon family, is hauntingly beautiful and I promise you it will be in your dreams that night if you hear it (Thursday or Friday night– OR BOTH– 7:30 at the Tennessee Theatre).

Can you tell this is my favorite concert of the year?
Posted by KSO blogger Andy at 9:54 AM No comments:

It is common knowledge that an orchestra will play together more successfully and consistently when the players all breathe together before an entrance. This is one of maestro Richman's pet peeves, and in rehearsals, asking us to breathe together results in a stunning improvement in ensemble. Breathing is not something that only wind players do; string players benefit from this practice as well, because the music itself has to breathe regardless of whether your instrument requires you to bow or blow. There are bound to be some extra breaths tonight, however, as the Cirque de la Symphonie performers will doubtless cause some involuntary gasps for breath on the part of those players who can see the action.

Do not be misled into thinking that the Cirque performers are the only ones participating in acts of derring-do. The orchestra repertoire for this concert is extensive, challenging and... breathtaking. Some of it is culled from recent concerts (Bach/Stokowski Toccata and Fugue, waltzes from Tchaikovsky's Swan Lake and Sleeping Beauty), not-so-recent concerts, (Shostakovich's Festival Overture, Rachmaninov's Vocalise), and a whole host of less-easily-categorized tunes. There are still a few tickets left for this fun and exciting acrobatic show that is suitable for all ages. As yet, the stunts to be performed are unknown to us, we will find out in about 2 hours at the dress rehearsal. The show starts at 8:00 at the Civic Auditorium. 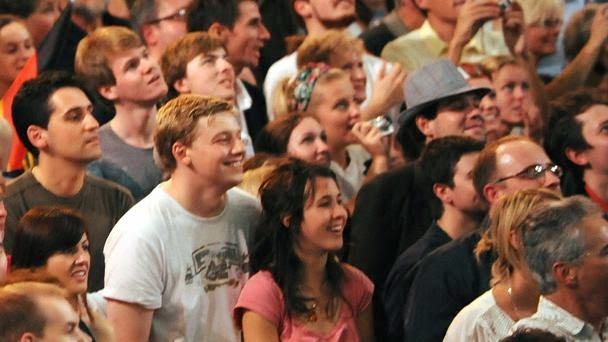 Posted by KSO blogger Andy at 12:08 PM No comments:

It’s early May; time for festivals, graduations, garden planting, and... the KSO Youth Orchestras’ final concert. The KSYOA’s 40th season comes to a close Monday, May 5th at 7:00 at the Tennessee Theatre. The five orchestras are comprised of 275 young musicians, all of whom are just tickled pink to be performing in the KSO’s awesome home theatre. The Youth Symphony, under the direction of Maestro James Fellenbaum, will be playing the effervescent Overture to Russlan and Ludmila, and two movements of Tchaikovsky’s Violin Concerto with guest violinist Bella Hristova. I am not sure of the repertoire for the other orchestras, but you can count on it to be crowd-pleasing.

Here is a photo of the final “string rehearsal” for the Youth Symphony... 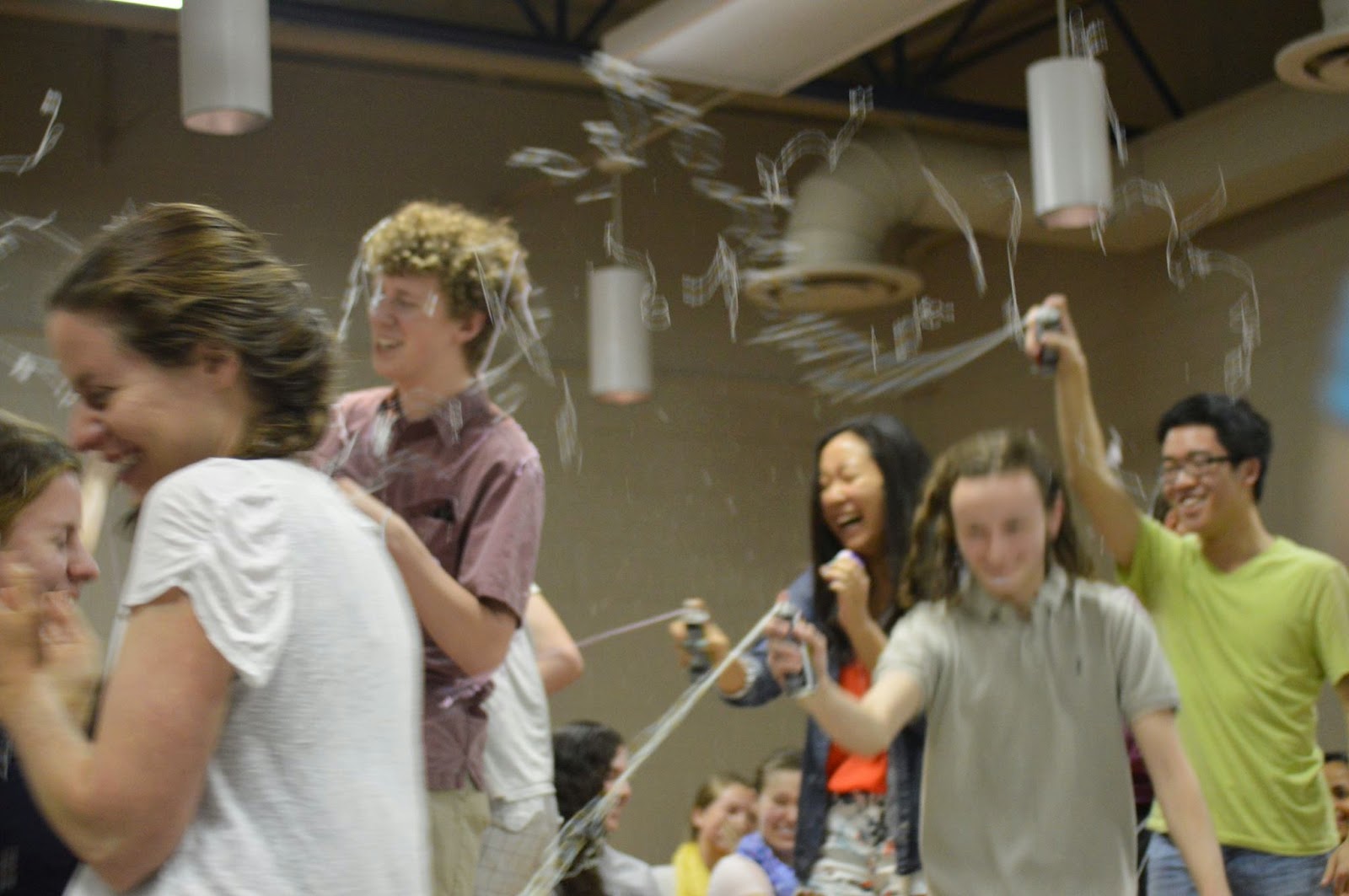 We (slightly) older folks in the KSO shall have an interesting week. In honor of the recently opened Richard Jolley glass installation Cycle of Life at the Knoxville Museum of Art, concertmaster Gabe Lefkowitz and Friends will be performing in the Great Hall of the KMA. While the scope of this permanent installation has caused some down time for sections of the KMA, the museum itself has also undergone extensive renovation since October en route to its 25th anniversary next year. This Thursday at 7:00 pm, Gabe will be joined by pianist Kevin Class, violist Katy Gawne, violinist Gordon Tsai and myself to perform Rachmaninov’s Trio elegiaque No. 1 in g, Sarasate’s Zigeunerweisen (if you missed it today or last Thursday at the Bijou, here is another chance) and Dvorak’s op. 96 American string quartet . (Sorry, no Phillip Glass).
Posted by KSO blogger Andy at 1:12 AM No comments:

Our concert scheduled to take place on the Market Square stage has been moved inside to the Bijou Theatre. Temperatures are expected to dip down into the single digits (Celsius), and our instruments all suggested that we make the move. Nothing can turn a Buffet Clarinet into firewood faster than warm breath into a cold instrument. Spokesman for the instruments, Mr. Woody Windham, says that while the Market Square ambiance is lovely, everyone will be happier in the Bijou– string instruments will stay in tune, brass players faces won't freeze to their mouthpieces, woodwind instruments will live to see another day– and we won’t have to thaw out our audience at the end.

Our program for this concert (which will be repeated in Maryville's Greenbelt Park on May 22) is packed with classical goodness– Beethoven, Tchaikovsky, Brahms, Strauss, Sousa– and Concertmaster Gabe Lefkowitz will preview a work from his upcoming appearance with the Chamber Orchestra, Sarasate’s Zigeunerweisen (Gypsy Airs). That’s 7:30 TONIGHT at the BIJOU.

It turns out this will be the first of two concerts we are to play in the Bijou this week. Our final Chamber Classics go-round will be Sunday afternoon at 2:30, with the aforementioned Gabe playing Zigeunerweisen and a whole lot more. It appears we are also entering a Beethoven Zone. Over the next 4 weeks we will perform his Overture to Prometheus, Romance in F for violin and orchestra and 2nd Symphony, (Sunday at the Bijou), Overture to Fidelio and Piano Concerto No. 4 (May 15 + 16 Masterworks), and who knows what else on the “Beer and Beethoven” event at the Blackhorse Brewery on May 21. So if you are a Beethoven aficionado, your time has come.
Posted by KSO blogger Andy at 9:56 AM No comments: