More Than Meets the Eye

Although the KSO schedule as seen on the homepage may look as if there's a lull, nothing could be further from the truth, as there is an opera coming up and a ballet in Maryville.

I have to go waaay back in the memory machine to recall my last time performing Engelbert Humperdinck's Hansel und Gretel, to 1984, when I still lived up in Hartford.  The pit was cramped and cold, and I think I did some damage to a violist's back with my bow, but the hypnotic beauty of Humperdinck's score has stayed with me to this day.  It has been nostalgic to revisit the opera recently in preparation for Knoxville Opera' s production this coming Friday (7:30 p.m.) and Sunday at (2:30 p.m) at the Tennessee Theatre.  Humperdinck is the quintessential "one-hit wonder," but zounds, what a hit, although he did compose further.  His opera Konigskinder boasts the first use of sprechstimme, a vocal technique somewhere between singing and speaking, and made famous by Arnold Schoenberg. Speaking of Arnold, in 1965, aspiring British pop singer Arnold Dorsey changed his name to Engelbert Humperdinck (same spelling, I guess to avoid confusion : p).  He enjoyed considerable success thereafter.

Looking ahead to March 4th and 5th, we'll be shuffling off to Maryville to perform with the Appalachian Ballet Company for their Spring Gala.  This is the first full, non-Nutcracker ballet production the KSO has done in about ten years, since the City Ballet dissolved their partnership with the Tulsa Ballet.  There will be three numbers based on books by Knoxville children's author Libba Moore Gray; My Mamma Had a Dancing Heart, When Uncle Took the Fiddle, and Little Lil and the Swing-Singing Sax.  The classic Sylvia by Leo Delibes will also be on the program, which will take place at the Clayton Center for the Arts.  Check out the ABC's website for ticket info.
Posted by KSO blogger Andy at 1:53 AM No comments:

Don Juan and Romeo and Juliet. Two titles that strike fear in the hearts of violinists everywhere. If you wonder why classical musicians practice so many hours, you should come to the Tennessee Theatre on Thursday or Friday night at 7:30, and experience these two monumental works (and staples of the audition repertoire for many instruments). As a bonus, you will get to experience Mozart's D minor Piano Concerto K 466, and blue cathedral by Jennifer Higdon. Our guest maestro this month is Eckart Preu, Music Director of the Spokane Symphony, and Alon Goldstein returns as piano soloist.

It's fascinating to browse through this old (1911) Encyclopedia Britannica to read about musicians when I'm posting a blog. Since we are performing it, I thought I'd investigate Richard Strauss' 1888 tone poem Don Juan. Although some of the volumes in this set have hardly if ever been opened, it became apparent that the page for Strauss was dog-eared! (but certainly not in this century). It says, "Strauss, Richard (1864-  )," and labels him as “a 20th-century Berlioz with a vastly wider musical knowledge and equipment.” They are quick to point out, however, that Strauss ripped off the Brits, claiming that a tune from his tone poem Aus Italien came from Naples, when it actually originated in Saint John's Wood. Come to think of it, this encyclopedia kind of trashed Don Juan as a work of a young man without a mature center, but glowingly praised works that followed, like Death and Transfiguration and Don Quixote. Thankfully, Strauss' obvious command of the orchestra as a single collective instrument in the work is not overlooked. (Jeez, cut him some slack, guys, he was TWENTY-FOUR when he wrote this!) Remember, Richard Strauss is not related to the Viennese Senior and Junior Johann Strausses, and Richard is pronounced "Re-card."

Sergei Prokofiev was a 10-year-old boy playing chess and studying music with Reinhold Gliere in the Ukraine when this encyclopedia was published, so there really isn't much point in pulling out the "P" volume. Suffice it to say that Prokofiev's command of the orchestra is right up there with Strauss'. As ballet music goes, only Tchaikovsky's or maybe Stravinsky's music can compete. The selections that have been chosen from the two suites scarcely need dancers to tell the story.

I'm sure there's a lot to say in that book about the Mozart concerto we're playing, too, but it's getting late and I have to "shed some wood" on that Strauss! And just so you know, Jennifer Higdon is from Seymour, but if you type "Jennifer H" in on Google, her name comes up first. Just sayin'.
Posted by KSO blogger Andy at 2:26 AM No comments:

The KSO Youth Orchestras will be presenting their winter 2016 concerts on February 14-15. The Preludium, Philharmonia, Sinfonia and Youth Chamber Orchestra will be featured on Sunday the 14th (what a unique way to spend Valentine's Day!) at 3:00 at the Tennessee Theatre. The Youth Orchestra proper will give its Concerto Concert the next night at 7:00, also at the Tennessee Theatre. This year's winners are harpist Kari Novilla, playing the Allegro Moderato from Gliere's Concerto in E-flat for Harp and Orchestra, and saxophonist Spencer McDonald performing Tableaux de Provence, by Paule Maurice. These soloists were chosen from a very competitive field, and fellow finalists Henry Shen, Melody Guo, Isabelle Lee, Lyric Rivera, and Daniel Choo all have no reason to be remorseful with their fine, polished performances. Also on the concerto program will be Tchaikovsky's dramatic Marche Slav, and selections from Bizet's Carmen Suites. These concerts both have free admission. Here are a couple “action shots” of our soloists. 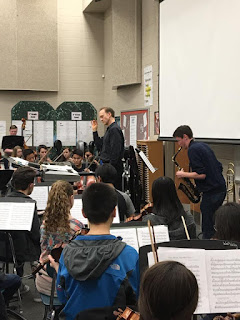 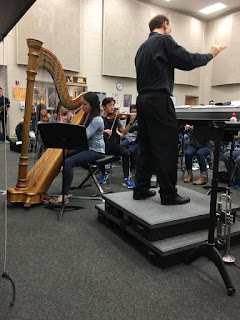 That same weekend, the Knoxville Symphony will spotlight the music of Rodgers and Hammerstein on the eve of Valentine's Day. I Could Write a Book about the stature of “R&H's” contributions to the canon of musical theater repertoire, but I have Confidence that you will be Whistling a Happy Tune when you leave the Civic Auditorium at 8:00 on Saturday, Feb. 13. Is a Puzzlement why someone would want to miss this Grand Night for Singing, on which will host Broadway notables Alli Mauzey, Gary Mauer and William Michals. The Carson Newman University A Capella Choir will also add The Sweetest Sounds to our production; I Cain't Say No to such blending of voices; it's one of My Favorite Things! Don't you dare miss what is sure to be Some Enchanted Evening.

So Long! Farewell!
Posted by KSO blogger Andy at 11:15 AM No comments: