There's a Gabe Lefkowitz and Friends performance fast approaching at the Knoxville Museum of Art, Wednesday and Thursday at 7:00.  It's your last chance to hear Gabe featured on the chamber music series that he initiated upon his arrival in Knoxville six years ago before he concludes his tenure as KSO Concertmaster at the end of the season. Another varied program awaits, with music of Dvorak, Gershwin, Sibelius and Chausson.  Pianist Kevin Class will be a co-soloist with Gabe in the Chausson Concerto for Violin, Piano and String Quartet.

Gershwin's Three Piano Preludes are jazzy and snazzy staples of the piano literature.  He had originally intended to put out 24 preludes, (one in each of the major and minor keys) like Rachmaninov had done, but the project was abandoned with only three Preludes making it to the publisher.  Gabe and Kevin will be performing Jascha Heifetz' arrangements of the Preludes for violin and piano.  The Sibelius work will be the Valse, originally composed for violin and piano, and Dvorak's ever-popular Humoresque No. 7 will fit neatly between the Gershwin and Sibelius offerings.  You may have heard the tune of the Humoresque as the setting of the warning posted in train restrooms; “Passengers will please refrain from flushing toilets while the train is standing in the station, I love you...”  It was a tune that musical humorist Victor Borge got a lot of mileage out of in his live performances-- I believe he did a bit about it in his appearance with the KSO in April of 1998.  In case you missed that, or even if you didn't, here is a clip of him performing it-- along with a lot of other of his patented silliness.

Ernest Chausson left us with only 39 opus-numbered works before his tragic death in 1899 (at age 44) in a bicycle accident.  He is remembered nowadays mainly for three works: his Symphony in B-flat, his Poème for violin and orchestra, and this Concerto for Violin, Piano and String Quartet, but all of his works are significant and unique.  The concerto is a work that showcases the piano and violin, but also presents many passages of genuine sextet chamber music, bridging the gap between chamber music and concertante literature.  His style is reminiscent of Franck (with whom he studied composition) and Tchaikovsky, but predictive of Faure, Ravel and Gershwin.  As with Gershwin, one can only imagine the potential riches lost due to an untimely death. 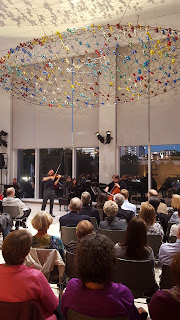 The focus of our March Masterworks concert shall be twofold: a send-off for our departing concertmaster, Gabe Lefkowitz, and a nod towards the cultural celebration that is St. Patrick's Day. Gabe will be closing the program out with Brahms' Violin Concerto, while the music of Peter Maxwell Davies and Percy Grainger bring on the Irish flavor. “Hidden treasures” by Dvorak and Sibelius will fill out the program. 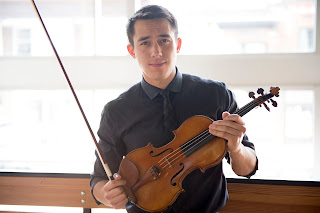 I have somehow managed to have never performed music of Peter Maxwell Davies, an English composer who, sadly, passed since the work was programmed in November of 2015.  The work we are playing, his An Orkney Wedding, with Sunrise, is a colorful work with a clever subplot.  Themes of bagpipe-y, Celtic character are tossed around by various instruments in the orchestra- flute, clarinet, horn and trumpet- but a surprise entrance by a piper near the end serves to affirm the efforts of the instrumentalists to “sound Celtic.”  Well, I guess it's not so much of a surprise now, but it's an amusing work with a big violin (fiddle) solo that careens and careers as would a wedding fiddler who had had a wee bit too much Glenmorangie 18.  That solo will be handled by concertmaster candidate finalist William Shaub, who comes to us from Houston.  Here is a link to a very amusing video of a performance of the work, with an introduction by the composer himself.

Dvorak's Scherzo Capriccioso is a tone poem written in the period between his 6th symphony (which we performed just a couple months ago) and his 7th.  There are gorgeous little solo passages for flute and harp, and the bouncy, waltzy nature of the work recalls Dvorak's own Slavonic Dances and the gracious, sweeping waltzes of Tchaikovsky.  Also on the program is Sibelius' Spring Song, a decidedly serene work which is a departure from Sibelius' usual musical style, which ranges from stormy to mercurial.

Gabe Lefkowitz is working hard these days, amid a 30-day schedule that sees him performing two concertos in Knoxville and one in Ocala, FL, along with the usual array of concertmaster duties that the Louisville Orchestra dishes onto his plate.  His two “Knoxville concerti” will be the Chausson Concerto for Violin, Piano and String Quartet at the KMA next week, and Brahms' Violin Concerto this week with the full orchestra.  The Brahms is one of the “Big Four” D-major violin concertos that dominate orchestra programming, the others being by Sibelius (played just last month!), Beethoven and Tchaikovsky (played by Gabe with us a couple years ago).

My first broach with the Brahms came in college, when I played in the Hartford Symphony under the baton of Arthur Winograd.  Our soloist in that performance was none other than Itzhak Perlman in a gala concert opening the 1983-84 season.  It was just thrilling to share the stage with Perlman. Everyone agreed that it was fine Brahms, but that there was just a little something missing.  Turns out that a couple days after that concert, Perlman was admitted to a New York hospital with a kidney infection!  He'd had to cancel an engagement with the New York Philharmonic on account of his ailment.  I learned a lesson in dedication that day.  Gabe does not have a kidney infection, but his infectious enthusiasm for all things violin will be in evidence this Thursday and Friday at the Tennessee Theatre at 7:30. Tickets available at the door or online here.

PLEASE NOTE that there will be a St. Patrick's Day parade downtown on Friday starting at 7:00, and Regal Cinemas will be opening the new Beauty and the Beast film that night, so parking may be a real donnybrook if you don't allow a little extra time. 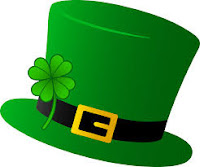 Posted by KSO blogger Andy at 11:44 AM No comments:

Journeying with the KSO

The next performance by the KSO will be Saturday night the 11th, when we shall mine a rich vein of pure Pop as Windborne's Music of Journey” travels into town. Cell-phones (formerly lighters) will be waving as the boys in the band channel Steve Perry's arena rock gang with some memorable tunes. The Civic Auditorium will be lit up like an arena, starting at 8:00. I remember their early hits, Lights and Wheel in the Sky, and remember thinking, hey, this band doesn't sound like they're from San Francisco. With former Santana members Neal Schon and Greg Rolie, and a drummer from The Tubes named Prairie Prince, they had a wide sphere of influence, evolving in the 80s into a Pop hit machine. Dang, could he sing high. A couple songs are staples at weddings; Open Arms and Don't Stop Believin'. I sure hope they do Wheel...

Speaking of journeys, the Story Time string quartets of the KSO are well-traveled of late, performing in libraries in 20 counties across East Tennessee this spring. (The full schedule can be found HERE). From Rockwood to Erwin, from Huntsville to Kingsport, children will be treated to three books read to the accompaniment of a string quartet! The books are geared toward pre-school aged children, and the titles are Stella & Roy by Ashley Wolff, Marianne Berkes's Marsh Music, and The Berenstain Bears' Ready, Get Set, Go! Here is a photo of one of our two Story Time quartets, ready and set to go. There is always a “hands-on” demo following the performance for kids to try out the instruments; a tiny cello and two tiny violins will also make the... Journey. 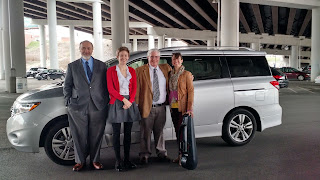 Posted by KSO blogger Andy at 3:16 AM No comments: