Please join the Principal Quartet on Sunday, January 29, 2:30 as we present two highly celebrated works by Tchaikovsky and Beethoven. Note that we are in a new venue for this concert, the posh new Powell Recital Hall at the Haslam Music Center on the campus of the University of Tennessee. Parking for this concert should be readily available in Lot 23, or in meter spaces (meters will NOT be in effect) on Volunteer Boulevard.

Although not known primarily for his chamber music, Tchaikovsky nonetheless hit a home run with his op. 11 Quartet No. 1 in D, from 1871.  Buoyed by the success of his tone poem Romeo and Juliet, and encouraged by Russia's “Group of 5” composers, (Borodin, Cui, Mussorgsky Rimsky-Korsakov, and especially, Balakirev), Tchaikovsky led the charge in creating a uniquely Russian musical language and aesthetic.  The centerpiece of the work is the Andante cantabile second movement, a work often excerpted and arranged for string orchestra.  Notice the use of mutes by the players in this movement to create a divinely serene atmosphere, and the “Amen cadence” at the end which holds further divine connotations.  (Whereas most music is based on cadences that travel from “V” to “I,” the Amen cadence progresses from “IV” to “I” after firmly establishing the “I” or tonic).  The transparent, open harmonies of the first movement and Scherzo led one early reviewer to dub the work “the Accordion.”  The nickname would have seemed derogatory if the accordion was not more reputable in Eastern Europe than in Western Europe.


Both Beethoven and Tchaikovsky are “used to” having their works be concert closers, so a quandary arose when deciding concert order for this program.  It might seem “normal” to go from old to new, but in this case, we had to consider how each work ended.  No other Beethoven quartet ends with a fugue, and no other fugue by any composer PERIOD holds such excitement and madcap verve, except for MAYBE the finale of Mendelssohn's Octet.  If the Op. 18 quartets are the book of Genesis of Beethoven's quartet output, the Op. 59's are surely the Psalms.  All through the work, there are sudden outbursts of virtuosic playing that one cannot leave unattended in one's practice.  I was introduced to one particularly famous (or infamous) cello lick when I was 19, and have been working on it assiduously in the 20 years since.  (Little humor there. “Yeah! Very little!”)  The “dance movement” of this work is a minuet which leads into the fugal finale via a coda; a scherzo would have been too much given the fugue's intensity.

Fasten your seatbelts!
Posted by KSO blogger Andy at 10:14 AM No comments:

Czech Out Our January Concert!

Our busy January continues with Masterworks on Thursday and Friday, January 19 and 20, 7:30, with guest Maestro Andrew Grams leading the orchestra through a Smetana tone poem and Dvorak's 6th Symphony in D.  Our guest violin soloist will be Bella Hristova, performing Sibelius' jaw-dropping Violin Concerto. All three works were written between 1875 and 1903, but they couldn't be more different in content and scope.

The concert will start with Šárka from Bedrich Smetana's Má vlast “(My Homeland).” Although this is also Czech music, or more specifically Bohemian, it is an entirely different animal.  Smetana was a very successful opera composer, having achieved success early on in Gothenburg, Sweden, of all places.  The Czech legend of the female warrior behind Šárka is charming, rustic mythology at its best.  Listen for the incongruous low bassoon notes depicting the snoring of the warrior men.  The KSO last played Smetana's music in April of 2015, his Overture to The Bartered Bride, and the rhapsodic onslaught of notes continues where that work left off.

The Dvorak 6th which closes the concert is actually a three-in-one package deal.  Therein Dvorak happily clicks the “Brahms 2” and “Beethoven 8” filters on his mental search engine, and the synthesis of these two works with his own unique genius adds up to rich symphonic experience on a par with his “New World” Symphony.  The last four Dvorak symphonies are all timeless classics; it's important to acknowledge that Dvorak is about way more than just his 9th.  The second movement Adagio is pure orchestrating genius, succeeding where Brahms had sometimes failed at balancing heart and mind.  The “dance movement” of this symphony is a furiant; a Czech dance that alternates triple and 2/4 rhythms, sort of like “America” from West Side Story, only backwards- and 80 years earlier.  If you like Dvorak's Slavonic Dances, then step right up, because he is at the top of his game here.

No winter weather is in the forecast, so come on down to the Tennessee Theatre later this week!  Look out for the new traffic pattern on State Street, is it seems to be two-way north of the new stop sign on Union Avenue.
Posted by KSO blogger Andy at 12:00 AM No comments:

PHEW!  The sudden snow almost put the kibosh on our Wizard of Oz pops, but things are looking up weather-wise for Gabe Lefkowitz and Friends' penultimate concert at the Knoxville Museum of Art. Wednesday and Thursday, January 11 and 12, we will perform music of Vivaldi, Bach and Mozart in the Great Room, and I am pleased to say that the Thursday night concert is SOLD OUT!  (Limited tickets remain for Wednesday night).  Even the stage will be crowded, as this installment of GL&F boasts a much bigger band; the Vivaldi (“Spring,” from The Four Seasons) and the Bach (Concerto for Oboe and Violin) will feature a 10-piece orchestrina typical of the Baroque. Mozart's delightfully pure Clarinet Quintet will finish the concert.

After this weekend's bracing weather, it looks like we'll be getting a proper January Thaw.  Vivaldi's “Spring” has a lot of the musical devices of nature: the tweeting birds, the rivulets of melting snow, even a barking dog (the solo viola in the 2nd movement).  You can almost hear the sap running in the maple trees!  After the Vivaldi, Principal oboist Claire Chenette will join Gabe for one of Bach's “other double concertos.”  The contrasting timbres of the oboe and violin go together like peaches and cream in this highly conversational, delicately interwoven work.

Mozart's Clarinet Quintet is nestled neatly in the Mozart catalog between his famous Eine Kleine Nachtmusik and his social commentary opera Cosi fan tutte.  Principal clarinetist Gary Sperl will provide the woodwind flavor for this work.  I reiterate that I did perform the quintet with Gary in 1985 at a restaurant in Charleston, SC.  One of the treats of playing at the Spoleto Festival was the profusion of high end restaurants at which festival participants could perform chamber music in exchange for a meal, or rain check for one.  By the end of our stay in Charleston, some of us had a backlog of “meal tickets” to use in just a couple of days.  We were pretty well-fed by the time we got on the plane to Italy!  Ahh, to be young and working cheap.  ANYway, Gary pulled together a quintet and we deployed our forces at a place called Celia's; how he remembered the name of the place is beyond me.  Little did I know that I would be joining him in the KSO just a year later, let alone that I would be playing the Mozart with him 32 years later.

Special thanks to the law firm of Merchant and Gould for underwriting this series, and for the Knoxville Museum of Art for hosting us.  Hope to see you there!
Posted by KSO blogger Andy at 1:17 AM No comments:

Cellos and Trumpets and Horns, Oh My!

It's coming this Saturday night at 8! The world's most seen movie will be shown at the Civic Auditorium, with the accompaniment of a LIVE orchestra!

The art history class I took in college had a unit on motion pictures. My professor, Bernard Hanson, placed a lot of emphasis on how the score could make or break a movie's appeal by going way beyond merely filling silent frames. We covered some great classics; Citizen Kane, Alexander Nevsky, and Ben Hur, among others. The upcoming Pops concert, with the KSO under James Fellenbaum playing Herbert Stothart's Oscar-winning score to The Wizard of Oz, will present a very fine example of effective use of music to advance the plot.


The Wizard has been such a pervasive cultural icon in the 75 years since its release. I recently had the pleasure of watching the film with my mother, who saw it at age 12 when it first came out. Just trying to picture the collective "oohs and aahs" that surely occurred at that moment when Dorothy stepped out of the little house into Munchkinland, marking the birth of color film on the big screen. The movie has spawned (among other things) a rock band (Toto), an Elton John album (Goodbye Yellow Brick Road), a donut-like treat (Munchkins), a song by America (The Tin Man), and a whole galaxy of internet memes. Here are some of my favorites... 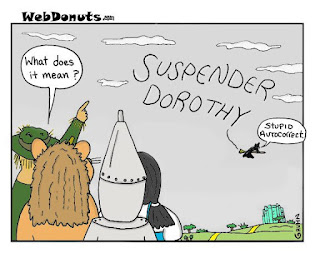 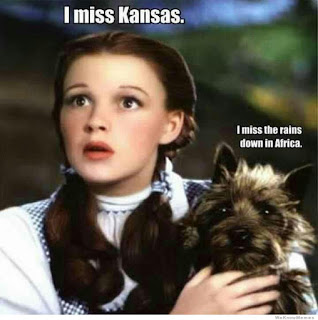 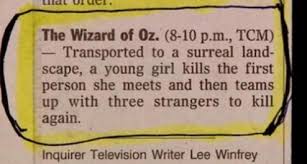 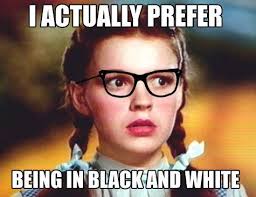 This one reminds me of the joke from the 80s, when Ted Turner was "colorizing" a lot of classic b&w movies. It was said that he wanted to "colorize" the first 10 minutes of The Wizard of Oz...

Posted by KSO blogger Andy at 9:27 PM No comments: