Yes, it's already Christmas Eve Eve, but there is still one shopping day left to give the gift of live music! Let's look at what is on January's horizon.

2017 will start with a trip to the Land of Oz! The movie that eased the pain of the Great Depression and has moved-- and frightened-- every generation since, will be shown with the accompaniment of the KSO. You've heard all of those great themes; Miss Gulch on her bike, the “If I Only Had A” variations, and the Winkies' marching chant; why not watch it with a live orchestra? When I think about the TV sets (and the “sound systems” they possessed) on which I've watched Dorothy and co., I can't imagine what that music is SUPPOSED to sound like. Well, we won't have to imagine any more, come January 7, 2017 when will Resident Conductor James Fellenbaum will lead us “Over the Rainbow” at the Civic Auditorium at 8:00.

An abrupt turn for the intimate will occur the next week, when on Jan 11 and 12 Gabe Lefkowitz and Friends will appear at the Knoxville Museum of Art with highly collaborative program. Featured will be Vivaldi's “Spring” from the Four Seasons, Bach's Concerto for Oboe and Violin with principal oboist Claire Chenette, and Mozart's Clarinet Quintet with principal clarinetist Gary Sperl. I will be playing the Mozart for the second time in my life. My first time was also with Gary Sperl, at the 1985 Spoleto Festival USA in Charleston. Gabe was... how old then? ANYway, we'll be in the Great Room at 7 p.m. both nights.

The KSO's long-time involvement with the Night with the Arts Martin Luther King, Jr. Celebration will continue on January 16 at the Tennessee Theatre at 6 p.m. The Carpetbag Theatre will offer a drama production, and Aaron Staple will direct the Celebration Singers in what is sure to be a moving tribute. There is no admission charge to this concert, but promising to take a loved one to attend this show would be a sweet gesture.

Just a week later, the Masterworks series will continue with guest conductor Andrew Grams and violinist Bella Hristova on January 19 and 20 at the Tennessee Theatre. Sibelius' timeless Violin Concerto has been teamed up with two Czech masterpieces; Sarka from Bedrich Smetana's Ma Vlast (My Homeland) and Dvorak's Symphony No. 6. The Dvorak is every bit the equal of the three vaunted symphonies of his that follow, and the Smetana is a wild ride, sort of like… ummmm…. Czech Liszt.

The Principal String Quartet will take the Bijou stage on January 29 at 2:30 for two grand works, Tchaikovsky's Quartet No. 1 in D, and Beethoven's third “Razumovsky” Quartet. Tchaikovsky's opus 10 contains the lovely Andante cantabile, which is often extracted to be played with string orchestra. The Beethoven is a particularly choice work with a torrid fugal finale that you will need to buckle your seatbelts for.

Here's hoping your holidays are restful and sweet, and that 2017 finds you at a Knoxville Symphony show.
Posted by KSO blogger Andy at 2:05 AM No comments:

A World of Joy

It's time for another Q Series episode! This Wednesday at noon, the Principal String Quartet and Principal Woodwind Quintet will bring a blend of well-seasoned classics and Christmas cheer to the table, to complement the delicious food provided by the host Square Room's kitchen. The Principal strings will preview our January 29th Bijou Theatre concert with a movement each from the Beethoven op. 59, No. 3 and Tchaikovsky D minor quartets. The Woodwinds will feature a suite from Bizet's Jeux d'enfants or “Children's Games.” (“Jeux” is pronounced to rhyme with “milieu,” and “d'enfants” becomes “dawnfawnce,” with the “n” sound merely hinted at, but not pronounced. I know, it doesn't sound anything like it looks-- darn those French with all of the silent letters in their words!)

There's a chance that as many as 3/5 of the wind quintet will be arriving at the concert on two wheels. Flutist Johanna Gruskin and oboist Claire Chenette log a lot of miles here and there, and clarinetist Gary Sperl is a renowned biker, but I daresay it is faster for him to walk to the Square Room from his residence. 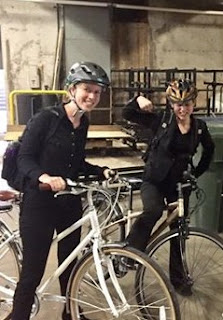 
December is the time of year when musicians are busier than mustard trying to ketchup. The coming week for the KSO, however, is Clayton week. This year's production is filled with bright copper kettles and warm woolen mittens, heaven and nature singing, Prancer and Vixen, and some snow and mistletoe. We shall take the road before us and sing a chorus or two, while visions of sugar plums dance in our heads. Maestro Demirjian's first Clayton Holiday Concerts will showcase GO! Contemporary Danceworks, the Powell High School Singers, mezzo-soprano Allison Deady, and the Knoxville Choral Society along with YOUR Knoxville Symphony. This weekend's concert times will be Friday and Saturday nights at 7:30, with Saturday and Sunday matinees at 3. A certain North Pole resident is planning on appearing, with his usual elfin entourage and a sackful of delightfully irreverent humor.
Posted by KSO blogger Andy at 3:40 AM No comments: