The Road to Tanzania

As the KSO's 80th season winds down, it's an opportunity to take a look at what some members of our orchestra will be doing this summer.  There is one more concert, and it's tonight at 7:30 at Maryville's Theatre in the Park.  You guessed it, it's an outdoor concert, but the rain should be ending any minute now.  Resident Conductor Jim Fellenbaum will lead us in a fun, family-friendly show that is a repeat of our Market Square concert (which actually happened at the Bijou).  After that, it looks like HEAVY PARTYING as we await the announcement (annunciation?) of the selection of our new Music Director.


As happened in a previous summer, principal clarinetist Gary Sperl will be flying across the pond to teach with the Daraja Music Initiative in Moshi, Tanzania.  Actually, his previous stint there was for an entire school year, (during which Peter Cain was our principal clarinetist), but rest assured, he will be back in the fall for the new MD's first season.  He will be joined by violist Hillary Herndon and violinist Rachel Loseke this summer in this VOLUNTEER teaching mission.  Gary's project there started a while back and is also known as Clarinets for Conservation.  In addition to the obvious music education value, C4C seeks to educate about the plight of the mpingo tree, which is unique to Tanzania and from which comes the wood used to make clarinets.  Last summer Hillary started a sister project called Daraja Strings, which involved some of her UT students.  Rachel is very excited about the trip, and has set up a Gofundme account to help defray costs.  Hillary also has set up a fundraising mechanism through UT called Volstarter, which can be accessed byclicking here.  We wish them the best of luck this summer!
Posted by KSO blogger Andy at 1:22 PM No comments:

The KSO's May Masterworks concert pair offers a grand opportunity for grand opera music.  The centerpiece of the concerts will be The Ring: An Orchestral Adventure, which is music from the four operas making up Wagner's Ring cycle, arranged by Henk de Vlieger.  The lighter side of this music was presented in January, 2015 as part of our “Bugs Bunny at the Symphony” Pops concert, along with footage of Bugs and Elmer as Siegfried and Brunhilde.  While there won't be any singing on our concert, there will be a massive orchestra featuring a rarely heard instrument that was invented just for these operas: the Wagner Tuba.  (And please remember, his name is pronounced “VOG-ner”). The Wagner tuba is an instrument that is doubled by French horn players.  I can't find the words to describe the difference between a French horn's sound and a Wagner tuba's sound, but the difference is real, and worth coming out to experience.  One unusual thing about this concert is the presence of not one but TWO pieces of music that have offstage brass.  At two different points in the Wagner, principal horn Jeffery Whaley will step off the stage and play the vaunted Siegfried horn calls that every horn player loves. 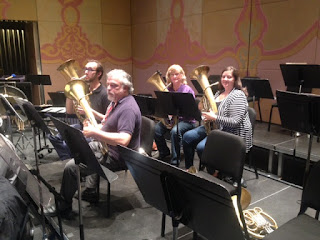 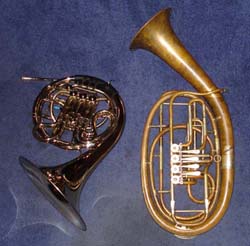 A better look at the Wagner tuba (right) compared to French horn (left).


The concert will open with Beethoven's Leonore Overture No. 3, one of four overtures Beethoven composed for various productions of his opera Fidelio.  More like a movement of a symphony than an overture per se, this work features principal trumpet Chase Hawkins rendering two fanfares from different parts of the house.  There is also a demonically difficult violin lick shortly after the fanfares, you can't miss it.  The work is considered the best of the four overtures Beethoven composed for Fidelio, but it has been criticized for overwhelming the music which follows it in the opera-- in essence, for being TOO good.

Between the Beethoven and the Wagner comes a work which is decidedly not from 19th-century Germany.  American composer Christopher Theofanidis (rhymes with “free this”) has written a three-movement suite based on Australian aboriginal creation myths.  Theofanidis' musical language is reminiscent of Adam Schoenberg, whose Finding Rothko we performed last month, and of Gian Carlo Menotti.  I find it remarkable that the four horns that lead off the work seem louder than the 11 (or so) horns that populate the Wagner orchestra.

A special tribute will be offered after the Beethoven. Keyboardist Carol Zinavage, who is resigning at the end of the season, will be honored for her 31 years of playing with the orchestra.  When I was new in town, she and I became fast friends, and soon began a long string of (roughly) annual recital collaborations.  We discovered that our musical interests had a lot of overlap, especially concerning Rock n' Roll, and it was so heartening to know another person who “gets” my sense of humor.  We'll miss ya, Carol!
Posted by KSO blogger Andy at 10:58 AM 2 comments:

The Knoxville Opera's production of Tosca, each act of which was performed in a different venue, was a huge hit in spite of the rain that fell on Act 3 at the Tennessee Amphitheater.  Outdoor concerts continue to adorn the KSO's schedule, with a performance at Maryville's Theater in the Park on May 26, with a rain date the next night, and Market Square Thursday, May 5.  Due to imminent cold, rainy weather however, our Market Square concert TONIGHT will be held at the Bijou Theatre, where concert time temperatures hopefully will NOT expected to dip into the 40s.  (So far May is looking cooler than April, just like December seemed to be warmer than October).  WE are expecting to dip into the music of Johann Strauss (Roses from the South), Franz Josef Haydn (two movements from his “London” Symphony), Franz von Suppe (Light Cavalry Overture) and George Gershwin (The Man I Love), as well as music of Irving Berlin and Leroy Anderson.  Resident Conductor Jim Fellenbaum will direct, and with any luck, his darling daughter Kiri will be on hand to distract him. And in spite of the change of venue, this concert shall remain FREE.

The weekend will send us into the land of cool, smooth jazz, with special guest Kenny G gracing our Civic Auditorium Pops stage Saturday night at 8.  Get ready for Desafinado, Forever in Love, Heart and Soul, Songbird, and Somewhere Over the Rainbow like you've never heard them before-- or if you have, probably not live.  Kenny G captured listeners' hearts with his 1986 album Duotones and he has not let go in the ensuing 30 years.  I'm a Big Fan!
Posted by KSO blogger Andy at 9:23 AM 1 comment: