Speaking of the viola, it’s time once again for the UT Music Dept.’s 6th Annual Viola Celebration, happening this weekend at the Alumni Memorial Building on campus. Concerts will be at 8:00 Saturday night and 4:00 Sunday afternoon. KSO violist and UT viola professor Hillary Herndon does a great job putting on this "alto clef festival."

There’s a lot of things going on this weekend, Knoxville is a great town. Greekfest is happening; if you know about it then say no more, but if you don’t, then here is a link. Metro Fest will occupy eight venues in the Old City/Downtown area, an all-out blitz of at least 26 bands from Knoxville’s burgeoning alternative music scene. And not far away, at Cove Lake State Park in Caryville, TN, the 6th Annual Louie Bluie Music and Arts Festival will happen from 11 am to 7 pm, honoring local African-American roots-music legend Howard “Louie Bluie” Armstrong. This festival will feature at least 26 MORE bands from the Knoxville area’s burgeoning roots music scene. And... you will want to save October 7th at 3:00, pianist Emi Kagawa will return to Knoxville in recital at American Piano Gallery. If you attended (or heard the rebroadcast of) the Chausson Concerto for Violin, Piano and String Quartet last spring, you know that this will be a superb event.

Have a great weekend!!
Posted by KSO blogger Andy at 1:59 AM No comments:

A New Season- And a New KSO Family Member


The KSO's Masterworks season opens this Thursday and Friday at the Tennessee Theatre with a varied program of Brahms, Copland, Richman and Rachmaninov. This will be the orchestra's 77th season, and a landmark tenth season for Music Director Lucas Richman.Whereas previous opening gala concerts have started at 7:00 and all subsequent concerts in the season have started at 8:00, every concert in this series including this Thursday and Friday night will start at 7:30 pm.

Call me iconoclastic, but to me, the words “academic” and “festival” are strange bedfellows. Brahms definitely puts the emphasis on “festival” with his Academic Festival Overture. One  might think a work with such a title was written to accompany a bunch of pointy-headed philosophy profs eating Braunschweiger and drinking schnapps, but it was actually a thank you gesture for the University of Breslau, which had bestowed upon Brahms an honorary doctorate in 1879.  The second theme of this piece is undoubtedly the basis for the Perry Como hit song Catch a Falling Star; that is how I have remembered the work over the years.

Lucas Richman’s Summer Excursions was written for LA’s Young Musicians’ Foundation Debut Orchestra Camp in 2003. As you may remember, this is the youth orchestra that Lucas toured China with in January. It is challenging for us; imagine how the kids must have felt, faced with this music for the first time! Embedded in the middle of the work is an original ragtime tune that Lucas dreamt up.

Aaron Copland is a composer whose music sounds like Lucas Richman’s. His El Salon Mexico dates from 1936, and features Copland’s trademark meter shifts, skewgy harmonies, and jazz rhythms. The music depicts a dance hall of the same name in Mexico City and uses Mexican folk tunes throughout.

I know. You’re attending the concert this Thursday or Friday night because of the Rachmaninov second concerto. The one from which Eric Carmen carved out (from the second movement) a major hit with the song “All By Myself” in 1975. Orion Weiss’ playing of the concerto is about as clean and brilliant as the stars on a clear, crisp, moonless autumn night.

We are without our principal violist Katie Gawne for a while, because the KSO family gained a new member last week. Last night we were introduced to Louisa Jane Gawne, who was born on Thursday the 13th! Here's Louisa with awesome big sister Alice. 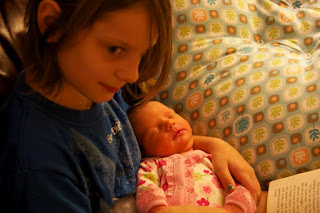 Posted by KSO blogger Andy at 11:09 AM No comments:


As  Sweeney Todd winds down, we are all thankful for a good run and appreciate all who attended. The houses all appeared to be full and things have been going incredibly smoothly. One thing that concerned me before the run was this unsettling instability in the pit floor, but the orchestra pit seems to have evolved some over the years. Time was, about once or twice per show at the CBT, (I’m remembering this from the late 1987 when they produced West Side Story) there would be a small earthquake (pitquake?) as the lift system for the pit would “burp” and you wondered whether you should file calmly out.
After Tuesday night’s performance, the orchestra members were treated to a tour of the set. We got a chance to see “the chair,” and our minds boggled as we learned that it took two months to construct. You see, this is no ordinary chair. The back of the chair tilts backwards, and the barber’s job of disposing of customers is simplified by CBT’s amazing carpenters. Here is tympanist Mike Combs taking a test-drive. 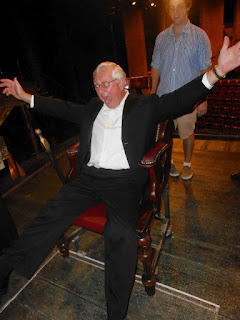 One charming detail of the scenic design is this general jumble of fake body parts underneath the body drop. I mean, I guess they're fake; I know that the body farm is nearby.... Speaking of body drop, we got a chance to see the whole shebang, and some of us even tried it out. It's tight quarters up there where bodies enter the tube to slide down, requiring no small amount of agility. It reminded me of some of the tree forts we built as kids; we made the entrances treacherous so that intruders would not be able to take over our fort. Here harpist Cindy Hicks takes a slide. I tried it too, head-first on my back. It was cool, man! 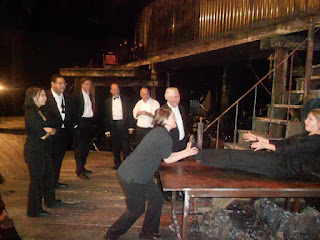 Posted by KSO blogger Andy at 5:36 PM No comments:

When you play a show for a long run like we are doing with Sweeney Todd, you can’t help but have some of the tunes linger on in your memory. Sometimes the lingering turns into outright fixation. That is what is happening on and off with certain tunes from the show. Right now, By the Sea is so catchy that it is becoming the soundtrack to my day off.

If it’s not a tune, sometimes it’s a concept that sticks in my mind. Like the way that a stylized version of the Westminster chimes begin each scene, or the way the beggarwoman has her own little thematic material- a kvetchy little tune, oy! An element that gives the show a timeless quality is the organ that signals that a life is about to end. To boost the bass, cellos and basses double the organ pedal notes in these passages, there not being any room for an organ with pedals. If I close my eyes, I can almost picture myself in a dark, smoky movie theater (the Tennessee?) with an organist accompanying Nosferatu back in the day. Except it’s really not a good idea to close my eyes during a show, for very long anyway, so I will leave that experiment up to theater-goers.

Our principal second violinist, Edward Pulgar, has achieved a status that makes us all very thankful. On August 29th, he took the oath of allegiance and is now a US citizen! We are very lucky to have him here. He can be found on Wikipedia lists of musicians AND conductors of Venezuelan heritage. Last night at Stacy Miller’s party facility, we feted Edward and the theme was... Pies! Someone actually made the chicken and beef pies and, to paraphrase Mrs. Lovett’s customers, “Dang, they were good!” 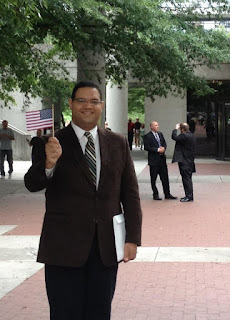 Posted by KSO blogger Andy at 12:56 PM No comments:


The first weekend of Sweeney Todd has past, and I am amazed by the sheer quality of the show, not merely through my own observations but also based on comments attendees make in the parking lot afterwards. In a full-length show like this, a lot of little details come together for an overall success in the pit, on stage, and backstage.

From my centrally located perch in the orchestra pit, I have a good view of the audience. I look out and see old friends, important people, and thankfully, not very many empty seats. Watch people who scramble to turn their cell phones off when the announcement is made, and those who sit calmly. Hmmmm. My details for a successful and safe show include leaving my phone in my car. I don’t trust myself to remember every time, and it’s just one less thing on my mind. Other details include earplugs and baby powder. (No, not used together!) The earplugs are obvious, as the brass’s sound can be, ummm, razor-sharp at point blank range, but baby powder, you might ask? Let me tell you, Sweeney is a very pizzicato-heavy show, and towards the end of Act 1 there is a number with a bunch of high A-string pizzes that turn my right fingers into, um, mincemeat. (The A-string is the smallest diameter string, which digs into your skin the most. HIGH A-string playing shortens the string even more, so there is EVEN MORE tension on the string). I learned from playing a lot of basslines with my jazz groups, baby powder on the right index finger sure takes the, ummm, edge off of that pain. A little dab'll do ya.

Upon perusing our Sweeney book the first time, I noticed a song entitled Johanna, and one entitled Pretty Women. Immediately I thought of the Kool and the Gang song, Joanna, and wondered, jokingly, if this was the same song. Well, it isn’t. Neither is Pretty Women the same song that Roy Orbison made famous in the 60's. (That was Pretty Woman, singular). After a few times through the musical, I do notice that there is a slight resemblance, VERY slight, of the Pretty Women we play to the CHORUS of the Kool and the Gang song. Maybe it’s just a certain chord progression or something, but that’s how my mind rambles when I play in a pit orchestra.

Okay! Time to go out and enjoy the beautiful Labor Day weather! Not...
Posted by KSO blogger Andy at 12:50 PM No comments: