It's a scary situation in a string player's life when the instrument buzzes. Just the words “bass-bar crack” send violinists' and cellists' blood pressure soaring. I don't know how it happened, but my “good” cello, “Brigitte,” caught a bad buzz at the beginning of the summer. I tried to wait it out, thinking that the humidity might help squelch the buzz, but no. Every F# I play still sounds like a snare drum or kazoo. So, it's time to visit the “cello whisperer.” In its absence, what I am left with is this machine-made “beater” instrument that really doesn't belong on the Masterworks stage. An untenable situation.

Enter James Fellenbaum. Our resident conductor also happens to be a cellist. (You heard him if you attended the Knoxville Symphony Chamber Classics concert from January, 2012, when we last performed Bach's 6th Brandenburg Concerto). So, remembering this instrument, and with my fingers crossed that he wouldn't be needing it, I took a bold step and laid bare my soul before him, and he was generous enough to allow me to borrow it for the next month or so. It's a departure for me, to play on an instrument that is younger than I, “(Birgitte” was ALLEGEDLY built around 1800 in England), but I look forward to teaching his instrument some new tunes. (Jim allowed that he had played the Kodaly Duo in college, so the instrument already “knows” that work. Gabe Lefkowitz and I will be playing a movement from it on the Concertmaster Series early next month.).


I arranged to meet Jim at the UT music building to pick his cello up yesterday, and on the way there it dawned on me that this is not just “the UT Music Building,” but the BRAND SPANKING NEW, Natalie Haslam Music Building. It still has that “new Music Building smell,” and luckily a class was just letting out and I was able to get a glimpse inside the recital hall. Here are a few snapshots of the interior of the building. 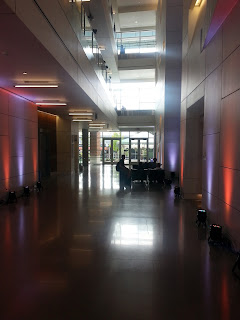 Here are front and rear of the Recital Hall 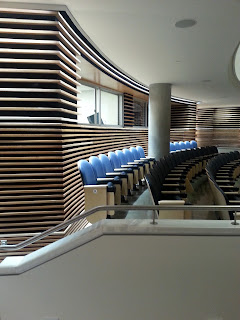 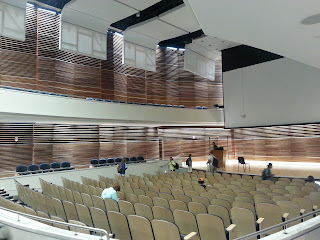 I though these translucent stairs were way cool. 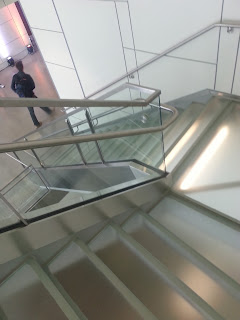