Early December is a time for “runouts.” Although a couple of groups have library and Music and Wellness programs this week, the major offerings of the larger ensemble are out of town.

Yesterday, (Tuesday) the core strings traveled to Athens, TN for afternoon school concerts and a general-public concert in the evening at the Athens Junior High School. The schools we played at were spread throughout McMinn County– Athens, Englewood, Etowah, Riceville. It had been many years since we'd gone to Athens and they were positively thrilled to have us back.

Athens is a small town, not a college town like its sister in Georgia, and not a historic major city like its mother city in Greece, but it does have an attraction that is notable on any level. “The Three Tenors of Athens” wowed us and our audience last night with a trio of tunes with holiday ramifications. An arrangement of Verdi’s La donna è mobile from Rigoletto was upgraded with lyrics pertaining to Christmas food. Franck’s beautiful Panis Angelicus was next, and an a capella canticle entitled Hallelujah brought their portion of the show to a touching close. 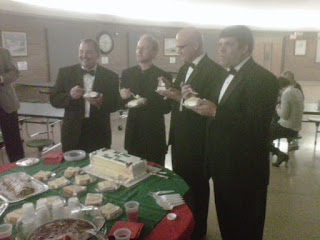 
Tomorrow (Thursday) will find us 60 miles in the other direction, at Lincoln Memorial University in Harriman, TN. This rep for this concert, repeated at 4:00 and 7:30 at Duke Hall Auditorium on the LMU campus, is mostly the same as the Athens runout, except that instead of three tenors, we will have one soprano. KSO staff member Aubrey Baker will be singing Mozart’s motet Exsultate Jubilate, the final movement of which is known as the “Mozart Hallelujah.”

It was a great day when the Clayton Center for the Arts opened in Maryville, giving the Appalachian Ballet Company a first-class, in-town home for their productions. We will be providing music to their Nutcracker on Saturday, Dec. 8th  at 2:00 and 8:00 at the Clayton.

Finally, a quartet from the KSO will be performing holiday-flavored tunes at West Town Mall on Sunday the 9th. The shows will be at 1:00 p.m. and (approximately) 2:00 p.m., and will be located in Deer Park, which is (to quote the memo) the rotunda next to guest services – at the intersection in front of the food court. Take a break from shopping and enjoy some LIVE holiday music!